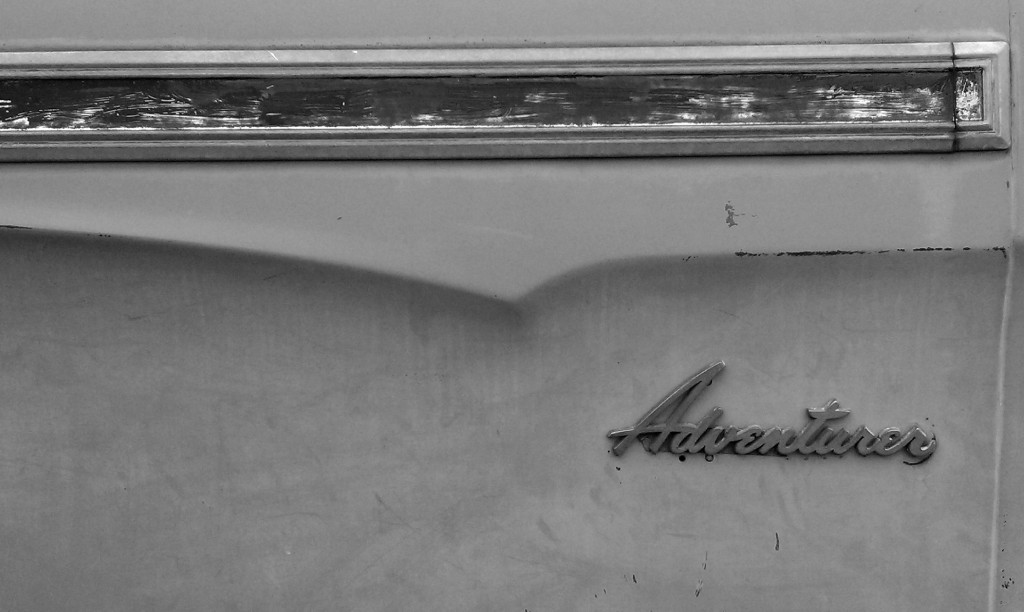 The first car I ever owned was a ’68 Chrysler Newport. It was aqua with a white top. It sat 8 with room to spare. I was its third owner.

The next car I bought on my own was a ’66 Volvo 122S. I had seatbelts installed in the back, as there were none. The original, factory-installed seatbelts in the front attach to a bolt in the floor. Presently, it has 114,000 miles to its credit. I am its second owner.

My fondness for old cars isn’t new. And while I don’t necessarily believe it’s been with me since birth, I may know from whence it came.

When I was a kid, my grandfather Charles – “Little Papa” – owned a Phillips 66 station in Griffin, GA. He and Granny Nita would sometimes watch us kids there. Granny would sit on a stool behind the glass and aged-wood candy case, where she chain-smoked while ringing up any sales that weren’t gasoline. The service part of the station wasn’t her domain. Maybe that’s why she always wore so much jewelry there – to distance herself as far as possible from any grease-monkey status that might attach itself to her.

Little Papa would stand behind the register, unless he was out pumping gas or in the repair bay, working on a vehicle. He wore no jewelry, but he did wear a dark blue uniform bearing the Phillips 66 emblem. And he also chain-smoked. He and Granny shared that pastime.

My sisters and I loved the filling station. Papa always let us get a cold drink from the big, metal cooler (I was a fool for Strawberry Nehi), and Granny would begrudgingly give us each our choice of candy (Snickers, thank-you-very-much). There wasn’t much to do there, as we couldn’t really run around and play in the path of cars. Mostly, I remember sitting around and listening to the old men talk.

I don’t know why, but old, Southern men used to gather at service stations and general stores every danged day (and maybe still do). Little Papa’s station was no exception. Instead of huddling around a pickle barrel, the old men leaned against the candy counter. Once in a while, they’d stand around in the service bay and opine about whatever mechanical quandary was testing Papa’s knowledge. “You gotta flush dat cah-buh-ray-tuh, Challs.” “All it needs is a little ol’ patch on dat radia-tuh – not a new one!” When those men were looking at the underbelly of a vehicle up on the rack, they all became experts. And I hinged on every word.

Back then, engines were simple. And though I couldn’t tell the difference between a spark plug and a canuter valve, it didn’t matter. For some reason, I sort of followed along with the mechanical conversations. And I was sincerely interested. Go figure.

Anyway, one of the old men who hung out at Little Papa’s station often brought his son along. The boy’s name was Richard, and he was probably 19 or so, twice my age. Richard was what we would now call “mentally challenged.” He was nice enough to be sure. He was just a little slow. And in that day and age, in that town, Richard was never to be seen as having any value.

As I’ve said, I loved that old gas station and the hours I spent there affected me immensely. I grew to love the old cars brought in by the customers. And to this day, the smell of gasoline makes me smile. But I digress…

Papa sold the station some time during my early teen years. Granny divorced him not long after. There was never any reason to even drive by the station after that. I don’t have a single photo of the old place, and I desperately wish I did.

When I was about 16, I was with my friends one night at one of the two movie theaters in Griffin. It was in a pretty sizable strip-mall, with 20 or so stores. It was dinnertime, and a familiar face walked into the record store where my friends and I were wasting time before the movie started. It was Richard – that sweet, slow boy I’d known years before. He wasn’t shopping. He was there on business. You see, Richard went from store to store at mealtimes and took food orders from the shop employees. There were a couple of fast food joints at the edge of the strip-mall’s parking area. There were a few more across the street. I heard Richard say, “It’s a dollar to get you some food from this lot, a dollar fifty to cross the road.” Richard had set up a food-delivery service before any of us had even heard of such a thing. As the clerks placed their orders, I smiled. So Richard had become an entrepreneur.

Before leaving the record store, I walked past Richard and smiled at him. Busy with his business, his hazel eyes looked right through me. He didn’t recognize me at all.

Flash back to one of those hot, heavy, summer afternoons at Little Papa’s filling station, the air thick with cigarette smoke and small-town politics. There I was – hanging out in the service bay with Richard. He asked what I wanted to be when I grew up. I said, “Maybe a mechanic.” Richard smiled and said, “Me, too! Maybe we can both grow up and be mechanics. Then we could get married and have little mechanic babies.” I didn’t say anything in response. There was nothing I could say. I didn’t tell anyone about that conversation either, because I knew Richard would have gotten in trouble for the implications, no matter how innocent his intent.

No, I didn’t respond. Instead, I just smiled and the moment passed. All the way into memory, where the filling station is alive and well, along with Little Papa, Granny Nita, Strawberry Nehi, a little girl who loves old cars and nothing but time…