The Mercy of Nature

On Sunday night, Mister and I pulled out the binos to have a look-see at the Super Moon, and it did not disappoint. Even with regular old binoculars, we could see craters galore and what I refer to as the moon’s belly-button. Later that night, I had a little trouble sleeping. I blamed it on the moon.

Monday brought warnings of Santa Anas. Such an innocent-sounding name for such potentially deadly winds. Many of us watched and listened, but the day proceeded with little worry. On Monday night, I again took out the binos and looked in the direction of the moon. Still fantastic, still clear. But the winds were picking up and I could see a haze nearing the moon’s glow. It wasn’t clouds, really. It felt wrong. It was wrong. During the night, I woke to the sounds of the wind and struggled to get even a little sleep. I felt mad at myself, for not being able to rest. The whole of the night limped along that way. When I woke Tuesday morning, I logged on to the interwebz, read a post from The Bloggess, and realized that she had written about her own sleep struggles where nature is concerned, and in a far more eloquent manner than I might ever accomplish. I’m giving you the link to that post here, so that you might read the work of a beautiful writer, as well as get a glimpse of what some (maybe many) of us encounter while being a part of this world, even though our triggers can be quite different.

Tuesday also found me cleaning soot, dirt, limbs and leaves from the pool. The Santa Anas had wreaked havoc up the coast, sending fires blazing at an astounding clip. Back here at the homestead, after an hour of cleaning, I had removed most of the leaves and solid sizable debris from the pool’s water. The bottom of the pool was black, however, so I left the poor filter running for a bit, hoping a dent might be made in the sediment. 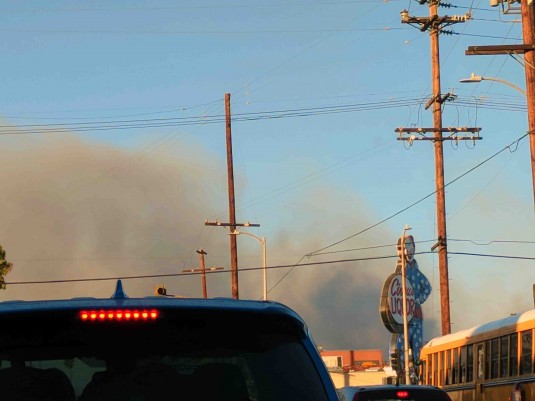 I had a few pressing engagements beyond the house, so I ventured out into the devil winds. At one intersection, I saw three separate leaf-filled funnels swirling in the street. The air was dirty and each time I left the relative calm of the car, my eyes burned and itched. News from Ventura, just up the coast, was dire. Before I could get my head around that fire’s continuing damage, news of another fire hit. This time it was just outside Los Angeles proper. I wondered about friends living in those areas. As I drove into North Hollywood, I looked up and saw smoke plumes. The winds continued. No relief.

Tuesday night, I went to bed and hoped for the best. The winds were still whipping, still angry, still dangerous. At just after 2am, I woke to strong smells of smoke. I listened intently, in case I could hear the whispers of flames. I heard only wind, and got up to check the area. None of my neighbors’ homes were burning, so it must have been the shifting winds – bringing the heavy smell of destruction to our street. When morning came, there was an added layer of soot on every surface. The pool cleaning began anew, this time with Mister handling the duties. More fires were reported and more damage had been done. Schools were closed. Businesses, too. Folks required to work outside were wearing breathing masks and goggles. The smoke smell was everywhere. There was no keeping it out. Morning news devoted itself solely to fire coverage.

I had a lunch meeting slated and while driving there, a sickening haze of smoke hung in Laurel Canyon. If it had been fog, the air would have been cooler. But that wasn’t the case. It was hot out. And this air hurt when breathed in. At the restaurant, a couple sitting nearby were intently following news updates on their phone. After a brief word with them, my table-mates and I came to understand the couple lived only a few streets over from the blazes of the Skirball Fire. They showed us video taken from their backyard, video of too-close flames and low-flying planes, doing the lord’s work by dropping fire repellent where they could. The couple could do nothing but wait. My friends and I offered prayers. Otherwise, there was nothing at all we could do.

As I write this, it’s Wednesday, early evening. Properties have been destroyed or are burning. Evacuations are being enforced. Freeways are closed, as fire danger is too near to risk allowing vehicles in certain areas. The Santa Anas are expected to blow through Saturday.  To say we here in Los Angeles are on edge is terribly inadequate. We are heart-broken and we are terrified. California has been scarred by fires this year (as well as years past). The damage is far from over. I don’t know how some folks will recover from this. Sadly, many will not. No matter where we live, we tend to think we control our home life. In suburban settings, we cultivate gardens and mold our outdoors into something pleasing to ourselves. In city settings, we trade home greenery for local parks. And yet, no matter where we reside, we control nothing really. Fires can spark. Tornadoes can twist. Floods can surge. The world, for all its beauty and wonder, is a tricky place. And no matter how much we love it, we will never truly control it.

I don’t expect to sleep well tonight. I am at the mercy of Nature.

One thought on “The Mercy of Nature”