A lot has been going on of late. I’m going to share some, in a backwards fashion. Deal with it.

This past Saturday was the Great L.A. Walk (GLAW). This year marked my fourth go and it was the longest yet – almost 19 miles. It was a departure from my past participation in that it started in the Valley instead of Downtown L.A. There was one more difference, too – I didn’t know anyone. I was walking solo.

I considered backing out. That would certainly have been easy. But there were two reasons I decided to go. I wanted to feel the sense of satisfaction after completing the walk and I wanted to see the city up close. So I showed up. 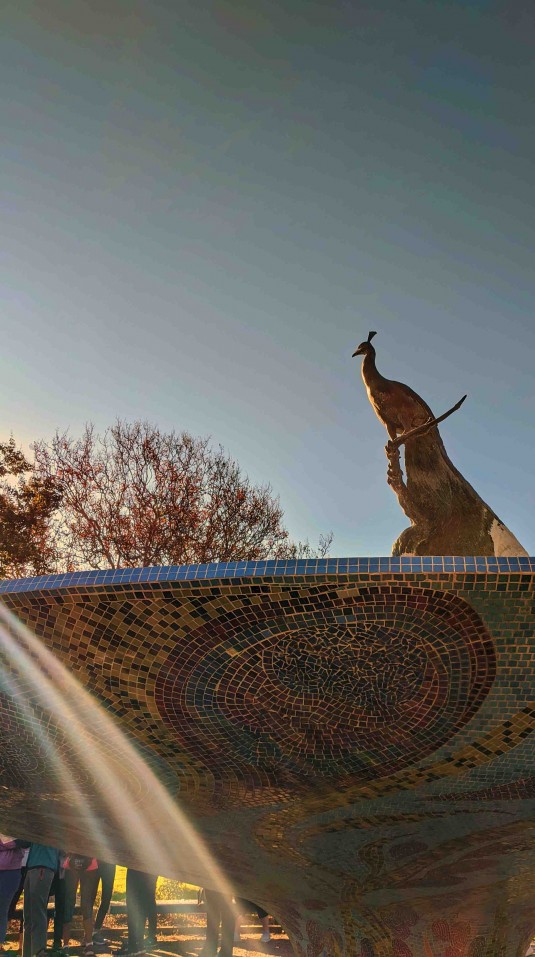 When I woke that morning, I had been having a lovely dream about hiking through the countryside with a group of people. In the dream, one fellow hiker was pointing out a Peahen along the path. I woke soon after spotting the bird and got ready to go. When I arrived at the starting point in Arcadia County Park, what do you think I spied with my little eye? Yes – a Peacock.

The walk began and I was alone. (Don’t feel bad. I was good.) The first mile passed Santa Anita Park. You may have heard of this race track. A lot of horses have died there of late. Something ain’t right, y’all. But I didn’t come for the ponies. I walked on by. 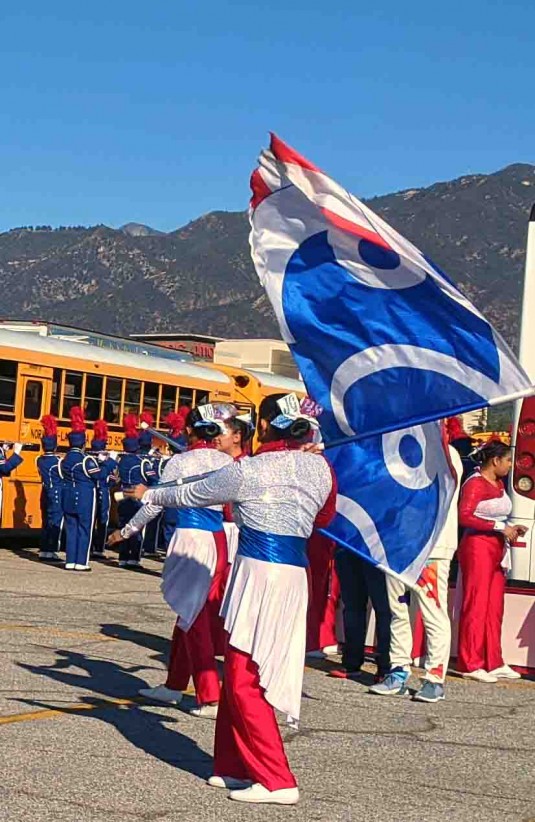 It was at this early juncture that I took a slightly wrong turn. Whereas everyone else was cutting through the Santa Anita parking lot, I meandered around it. Yes – this added about a half mile to my route, but it also allowed me to see some marching bands and flag corps getting ready for a big competition. I’m good with the extra steps. Those kids were better to look at than a parking lot. 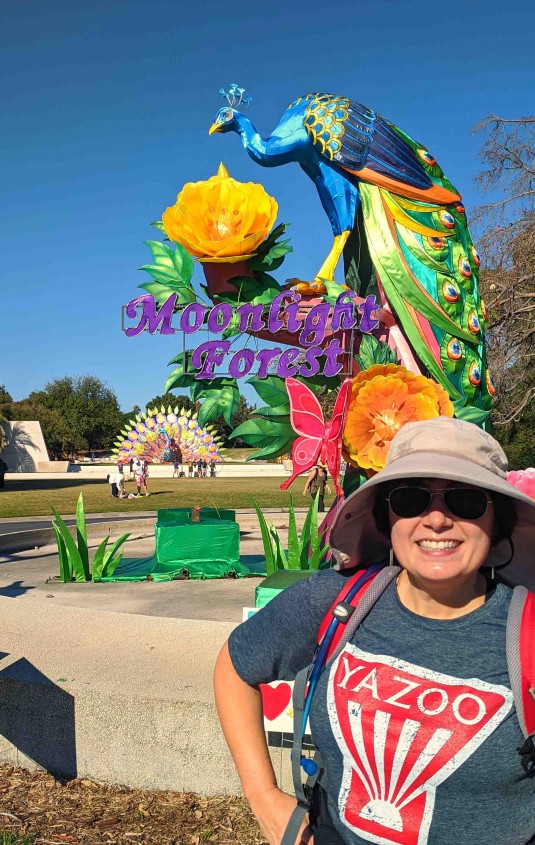 The next big site was the Los Angeles County Arboretum. I won’t lie. I’ve never been. But it was danged cute from the outside. And there was another Peacock.

Pretty soon after I found myself chatting with a lovely gentleman who has walked 13 of the 14 GLAWs to date. Let’s call him David, as that was his name. We walked and chatted for a few miles. David was perfectly friendly, but at some point he was outpacing me and I decided I wouldn’t keep up. I told him I was gonna hang back a bit and I bid him farewell.

The next couple of miles weren’t anything to write home about. That stretch was all about getting into Pasadena. I did spot some pretty good sidewalk graffiti, however… 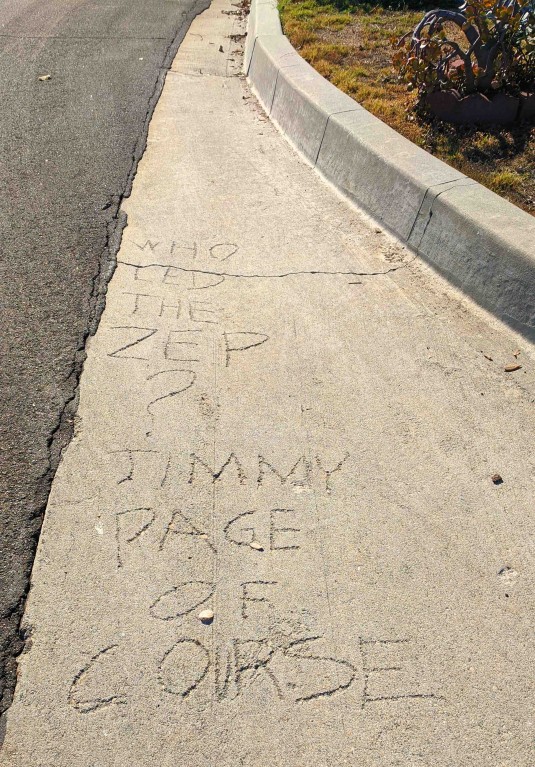 By the time I hit Colorado Boulevard, I had begun chatting with another GLAW walker. I’ll call him Eddie, because, you know, that was his name. Eddie was alright. Turned out he appreciated a nice beer, so when we hit Old Town Pasadena, we opted to stop for lunch at a familiar pub and our conversation continued. We spent an hour there and then we hit the road again. 8 miles down.

After we got through Old Town, it was time to cross the Colorado Street Bridge. 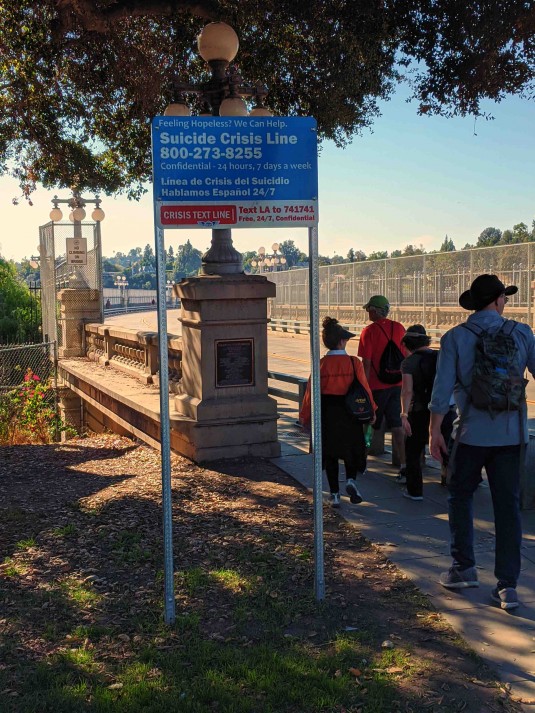 Now – I’ve seen this bridge for decades, as it’s visible from the 134 freeway. It’s beautiful and I have wanted to walk across it for ages. I finally got my chance.

It’s known as “Suicide Bridge” and a lot of souls have ended their lives there. I can’t speak to that, but I can tell you that when I’d crossed and looked back, it was even more beautiful than I thought… 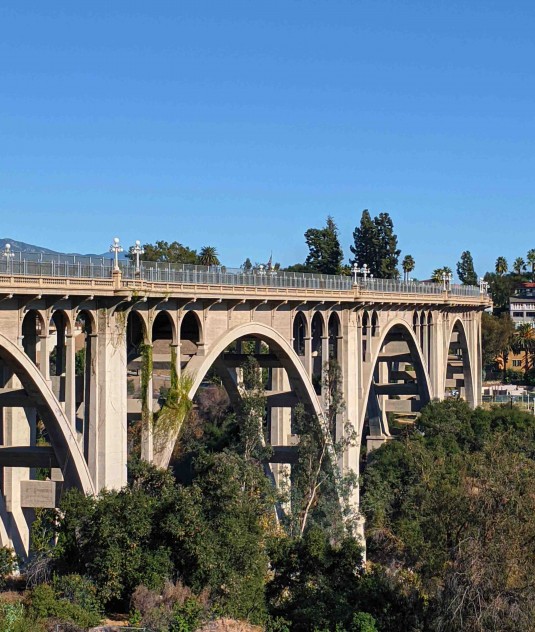 After a few more miles, we entered Highland Park. This area reminded me why I do this crazy walk. I’ve driven through Highland Park more times than I can count. But until I walked it, I had never really seen it. 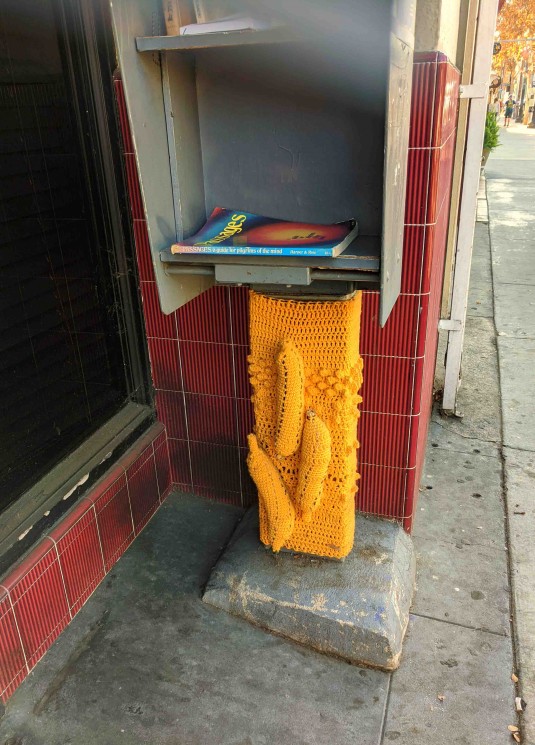 Had I been in a car, I never would have seen how someone knitted around an old phone booth. 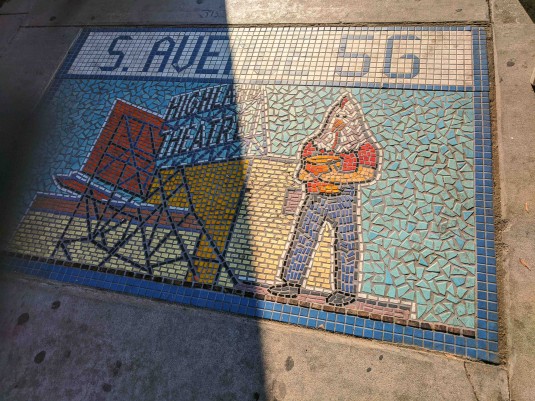 Each corner along Figueroa Street has a cool inlaid mosaic. They’re all different and they’re all lovely. This one happens to mark where Chicken Boy resides. 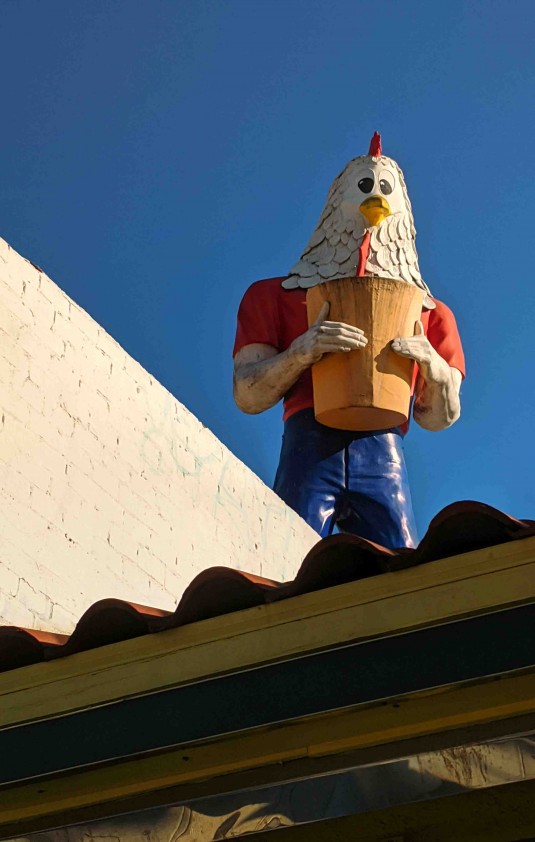 Chicken Boy was first erected in the 1960s and lived Downtown at the Grand Central Market until the mid-80s. Now he’s found his forever home and he’s much-loved.

During this stretch, Eddie and I were starting to feel the miles. We knew we had about 6 more to go and we were committed to finishing. I don’t know why, but we never checked the time. We just kept going. 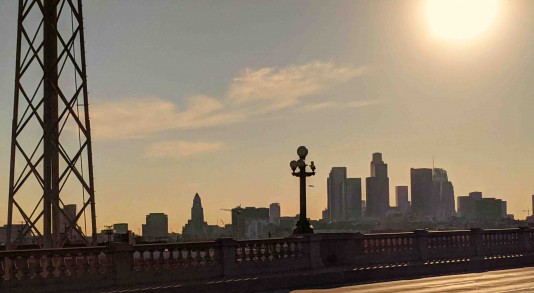 By the time we crossed the Broadway Bridge, we realized we were close. There was Los Angeles. It was beautiful. We kept walking. 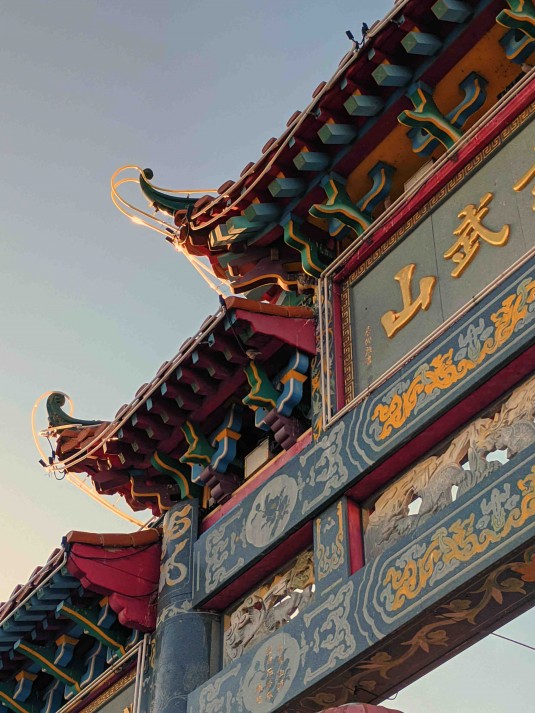 When we entered Chinatown, we checked the itinerary. 17 miles down.

I started to get excited, but not like years past. I have literally jumped for joy when nearing the end of past GLAW walks. On this day, I was just happy to be finishing.

Eddie and I talked about some of the people we passed on the sidewalk and how they were just out for a good time. It would have been beyond their comprehension to hear we’d walked from freaking Arcadia. We didn’t tell anyone or anything, we just kind of marveled at how you can be in a public place, and no one has a clue about you. Of course, the converse was true as well. We didn’t know a damn thing about any of the folks we passed. Frankly, I was too tired to care.

When we reached the end of the walk – Los Angeles City Hall – Eddie checked the time. Not counting our lunch stop, we had covered the nearly 19 miles in 6 hours. Pretty good, if I say so myself.

The group was slated to meet at a bar for some celebratory hang time and I intended to go. I really did. But I looked up from City Hall and the Metro stop was right there. The pull proved too much for me. I hugged Eddie goodbye and thanked him for the fine company, then I walked to the train station and headed underground. There was still daylight when I made it home.

My muscles fared fine. I did have some joint pain that night and the next day, but it cleared up by Monday. I had exactly one blister, but that was it. I did alright. That sense of accomplishment? It showed up in spades. Seeing the city up close and personal? Yep and yep. It’s a crazy thing to do, I know. I just dig it. It makes me feel alive and reminds me that I’m part of this town. A big old dorky part of Los Angeles. I’ll take it. 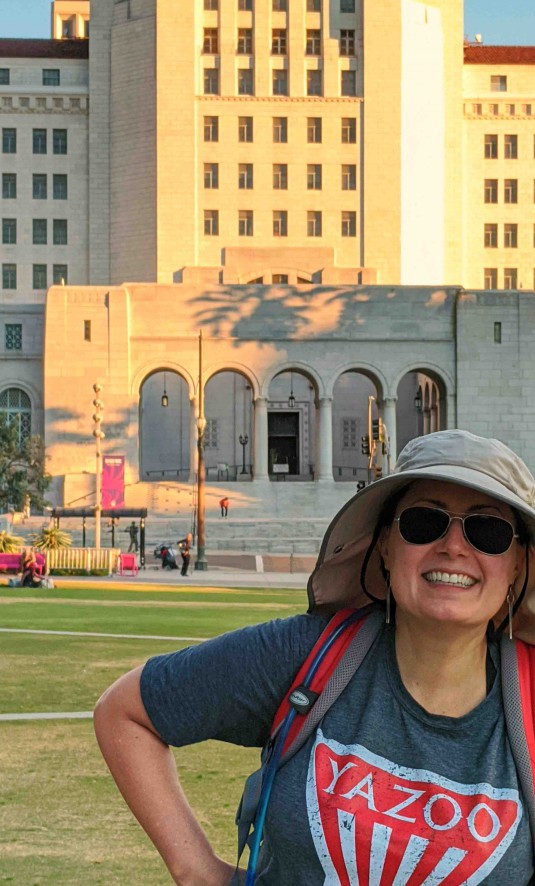