A while back, Mister and I noticed a considerable number of dead honey bees in the pool. There are usually a few in there, but not gobs, for cry-eye. What we were seeing was not good.

Our next door neighbor has a gi-normous tree in the backyard, and in the top of that tree there’s a big hole. Since moving here, we’ve watched honey bees fly in and out of that hole and we’ve rightly assumed that’s the location of their hive. As a lover of food and flowers (pretty much in that order), I appreciate the heck out of honey bees. Their presence next door has been somehow comforting. 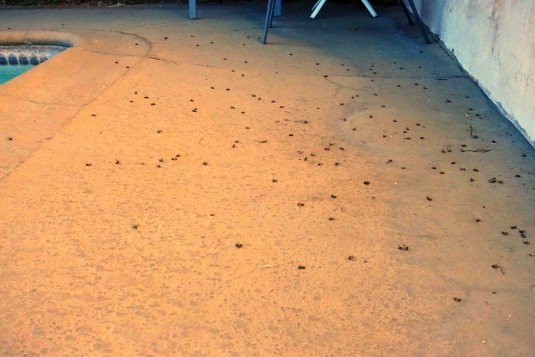 But, sadly, hives are dying all over the place. We thought the bees we were finding in the pool were coming from the neighbor’s hive. And then the dead bees’ numbers increased. Each day, we woke to find hundreds of dead bees on the pool deck. It was shocking. And heartbreaking. One day we knew we needed to sweep up the bees. We said we would, then promptly put off the task until the next day. But when we went outside that next morning, we found zero-point-zero bees on the deck. Not so much as a wing. I thought there must’ve been a wind in the night or some such. I mean – the simplest explanation and all. I moved on to the business of the day and forgot about the bees. By early evening, the deck was once again littered with the lifeless bodies of those sweet honey bees. And that’s when I saw them… 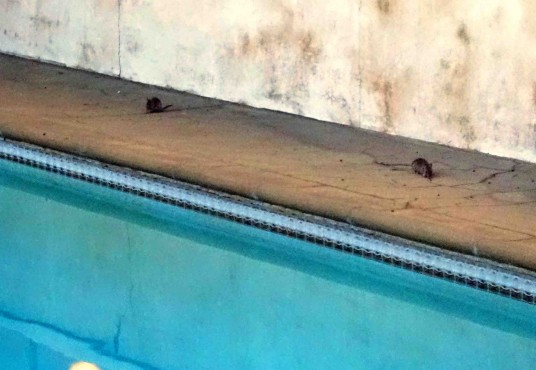 The mice. They were coming out of the cypress trees by the back wall and they were eating the hell out of those dead bees. I wasn’t even a little bit happy about it, but they were mice. I figured I could take care of them and not have to worry. (And yes, people – by take care I do indeed mean killing the shit out of them.) After some strategic rat poison-placement, there were no more mice. Granted, there were no more dead bees, either, and the mice may have simply moved on to another food source. No matter the reason, I forgot all about those little mice.

This past weekend, I was doing something or other in the house and a movement by the pool caught my eye. Let me be clear here. I wasn’t wearing my glasses, which I use for distance vision, and still – whatever was out there was big enough to grab my attention. I got the binoculars out and aimed toward the back of the pool. That’s when I saw the biggest, fattest R-A-T I’ve ever seen. (And I’m including the Boston rats I used to mistake for cats.) This asshole was so big, he made me think he’d eaten all the other little mice that had been snarfing up the dead bees. Right then, Mister walked in and I handed the bi-nos to him. He was shocked. That rat’s tail alone was about a foot long, so you can imagine how big the fucker was.

I put out more poison and it’s disappearing, so hopefully that giant rat will soon be dead. I certainly hope so at least. That mutha could chew my face off in seconds flat. I do not like rats, y’all.