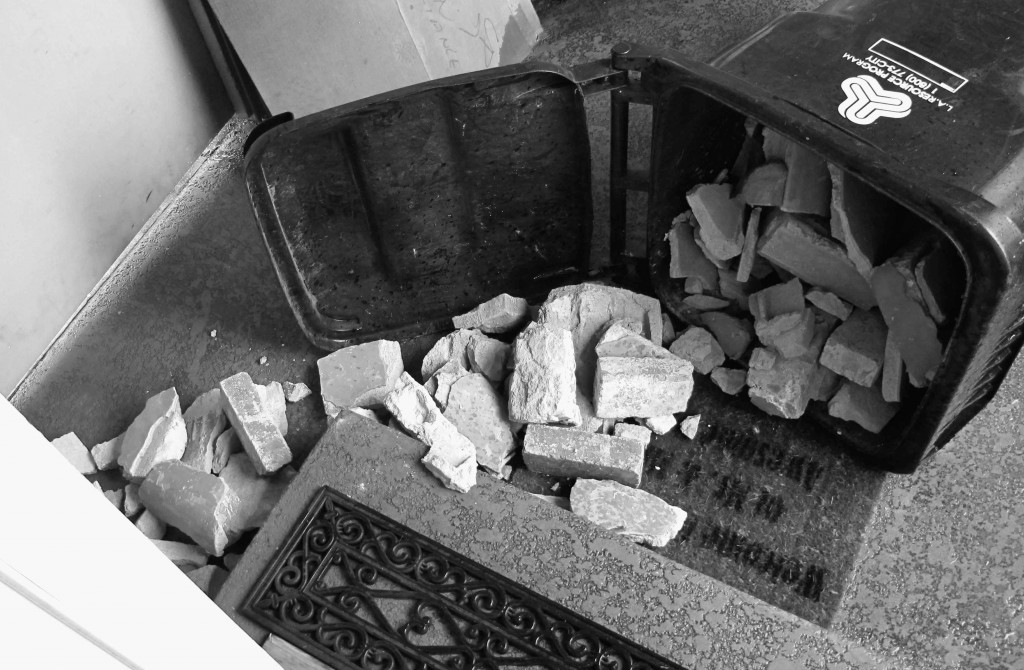 As Mister and his Daddy were working on getting rid of  Fireplace Face, I thought I’d do my fair share and haul some of the demo debris out to the curb. We had foolishly thought we could use a very fine trash bin furnished by the city of Los Angeles as our debris transport. We had also foolishly packed the lower half of said very fine trash bin with lightweight refuse. Then we loaded the top half of the bin with heavy bricks and cement. Next came the moment of my very good intention. I foolishly pulled the bin toward me, to tilt it up on its wheels. And that’s when it happened.

The top-heavy bin weighed more than me, and that thing wasn’t about to play. As soon as it was on its wheels, the bin decided to just keep going and it flipped right over on top of me, taking me down in the process. I was pinned beneath it and all that rubble.

Inside the new pad, Mister and his Daddy were using an electric demolition hammer to break up Fireplace Face. That thang was loud, y’all. So no one heard me fall. No one heard me calling for help. I had a couple of minutes lying there, waiting for a break in the demo hammer’s din, to calm myself and focus. When the racket did die down, I called out and help arrived shortly after. I was rattled and bruised but nothing was broken. My left knee is pretty banged up, but that’s the worst of it (and it will heal). It could have been so much worse, but wasn’t. Isn’t.

Here’s the funny thing about being in an accident: if you can see it coming, it goes in slow motion. When that trash bin began falling on me, life slowed. I had ample time to brace myself for the fall. Time to figure out where best to fall. Time to protect my head from falling bricks.

I don’t understand the physics of bending time. I flippin’ love Doctor Who and the T.A.R.D.I.S., but I still don’t have a clue as to how any of it works. But I don’t have to understand it to tell you how it went down.

It went down slowly.