The other night I was at this thing at my ladies club, a sort of mixer, and there was this ice-breaker game. This gist of it was this – upon entering, each attendee had a sticker placed on her back. She couldn’t see it, but others could. Each sticker had an image (likeness) and description of a woman of note. Some were recent (Rosa Parks, Queen Elizabeth II) and some were ancient (Sappho, Eleanor of Aquitaine). The wearer of the sticker asked yes/no questions of other attendees, in order to try and figure out who was on her damn back. It was fairly simple. How hard could it be?

When that sticker was slapped on my back and the game was explained, I immediately declared that unless the broad over my shoulder was T-Swift, I was unlikely to figure out shit. It was a joke, of course, but it was also kind of true. I don’t necessarily have a clue about, well, anything. Let me cut right to it. I wasn’t excited about this game. But I’m a go-er. So I did my best to encourage others to ask questions, to involve and engage them and make them feel welcomed at the club. That was not only easy for me, but fun. But wouldn’t you know it – there were other people there who also wanted to involve and engage others. That means they turned to me and put me in the hot seat.

As a friendly introvert, social stuff takes a certain amount of energy. And that usually means stress is involved. I’m a grown-ass woman, though, so I can generally muster the strength and deliver the goods. At least I think that’s the case.

Anyhoo – once I chilled the hell out, I went for it.

Living or dead? Dead. I liked that.

And so I asked, “Am I Simone De Beauvoir?”

Yes. I freaking was. 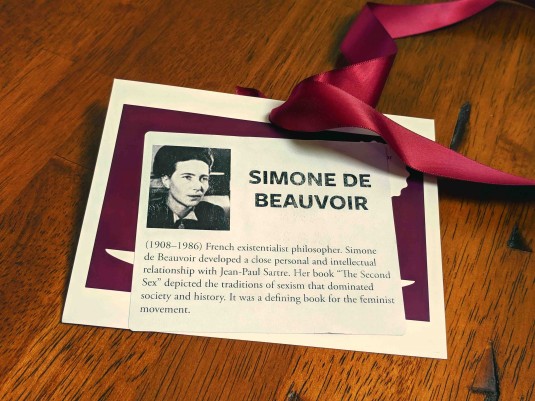