The Edge of Where I’ve Been

Mikki BriskJuly 22, 2021Creativity Home Life Painting1 Comment on The Edge of Where I’ve Been

I have stayed away from this little blog for so long now, it would be easy to say I’ve quite forgotten it. But that isn’t true. While it has gathered dust in the corner of my brain-hole, it has held its posture, confidently awaiting my attention and – dare I say it – love.

Since the world turned upside-down, I’ve kept busy. I finished the job of refinishing my tile floors (finally) and I painted the closet doors in the rumpus room so that they disappear. Not sure why I never thought of that before, but being housebound gave me that gift so – silver lining? I’m pretty danged happy with the floors. And those closet doors should have been painted ages ago. 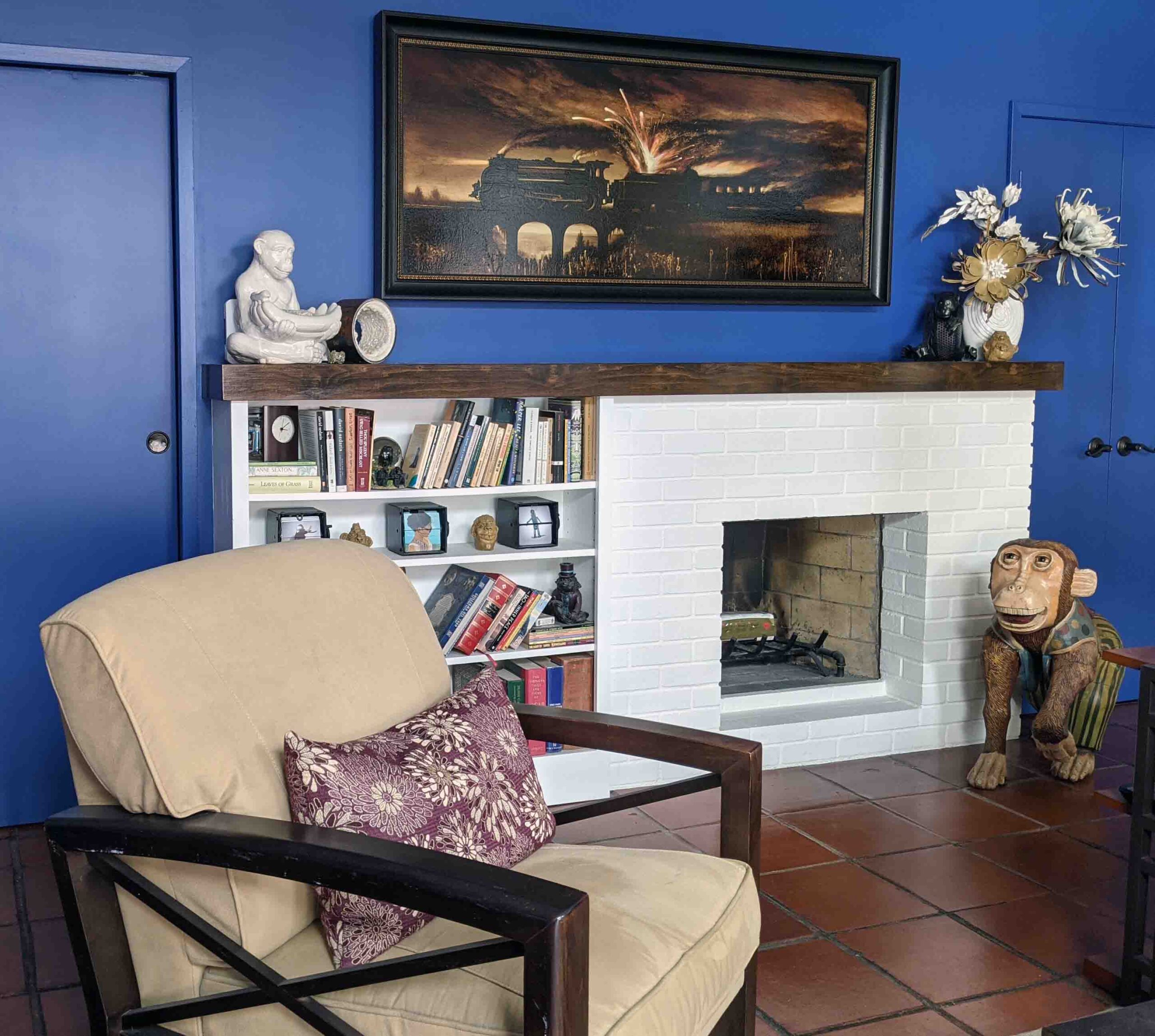 Early on in the dark times, I designed and built myself a jewelry hanger. I was pretty tired of leaving my earrings and such lying on the bathroom counter. As that’s where I get dressed, I tend to add (or take away) jewelry in that space. So I wised up, stopped pretending otherwise and devised a way to keep my most-worn pieces nearby. I no longer have jewelry lying about my counters and I really like the build, which is bespoke to a narrow bit of wall.

I became a Polar Babe. For reals. Late last summer, as the night air began to cool and the pool’s water temperature steadily declined, I got it in my head that I would continue to jump in. That I would see how far into the off-season I could make it. I stopped my daily treading (an hour a day – for reals), but I walked myself to the deep end of the pool, gave myself a quick pep talk and jumped. Every day. When the floating thermometer said the water had reached 54F, I still jumped. When it rained (once), I jumped. I didn’t dawdle, mind you. I popped up from the pool’s bottom and got my ass to the shallow end and out of there as quickly as I could. But I still jumped. I didn’t miss a day and now it’s been over a year that I’ve been getting into that pool. I’m back to my hour a day of treading, which I love. And though the water is now around 84F, I’m still a Polar Babe. Yeah.

Like most everyone, I went without a hair cut (or color) for over a year. It’s been ages since I’ve had hair long enough to pull into a ponytail, so I didn’t remember if I even owned hair pulls. (I did.) And I had a few moments of 80s nostalgia for inspiration… 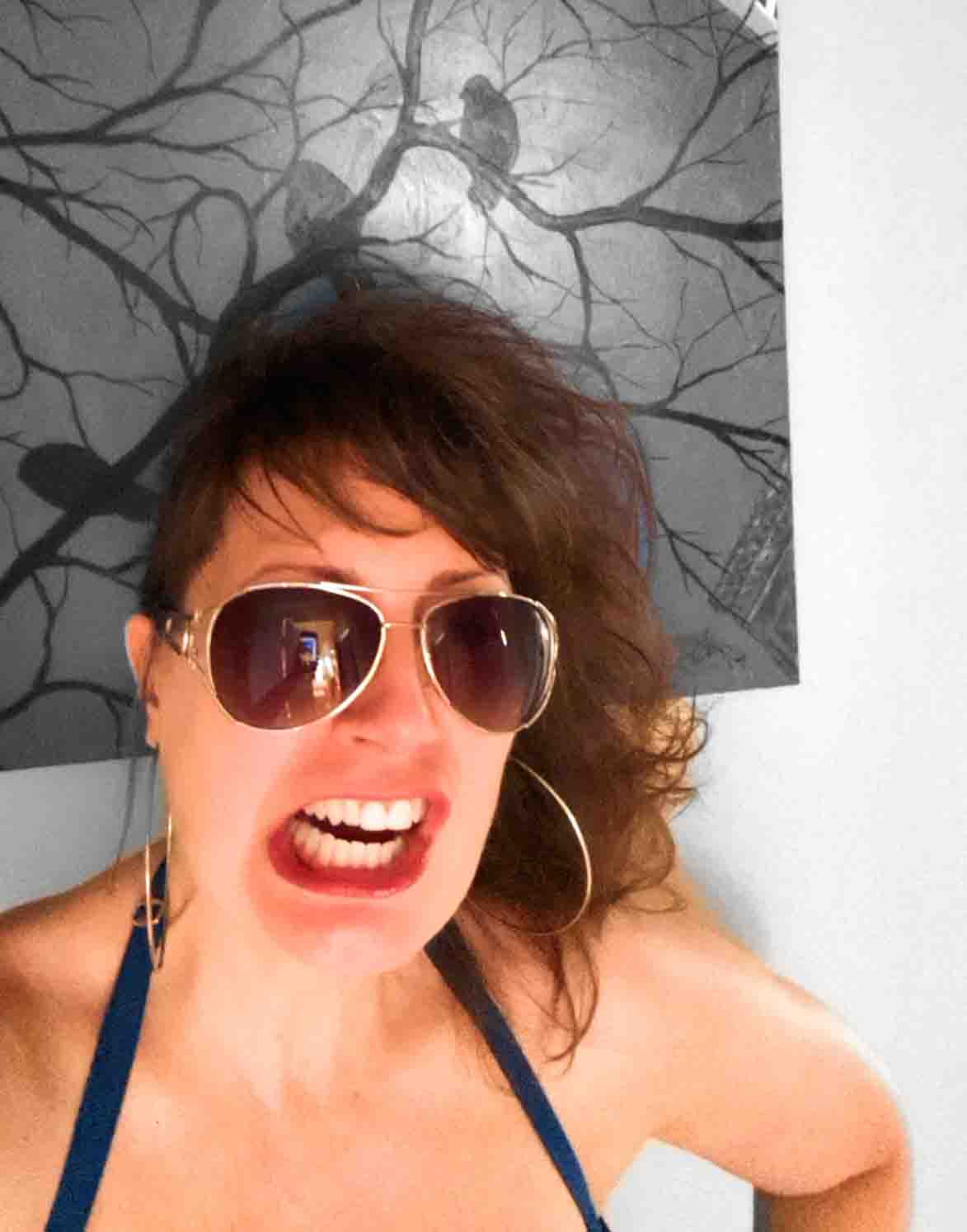 And then the world reopened! Somewhat. I saw the dear souls who tend to my tresses and they worked their magic. I felt lighter. For all kinds of reasons.

At some point I decided I wanted to dress up the area around our pool. It’s tired. We’ve had a couple of estimates for replacing the wall/fence and the lowest number we received was – I’m not kidding – $25,000. That ain’t gonna happen, y’all. So dressing it up will have to do. I found a tutorial that inspired me and I set about altering the specs to fit my needs. 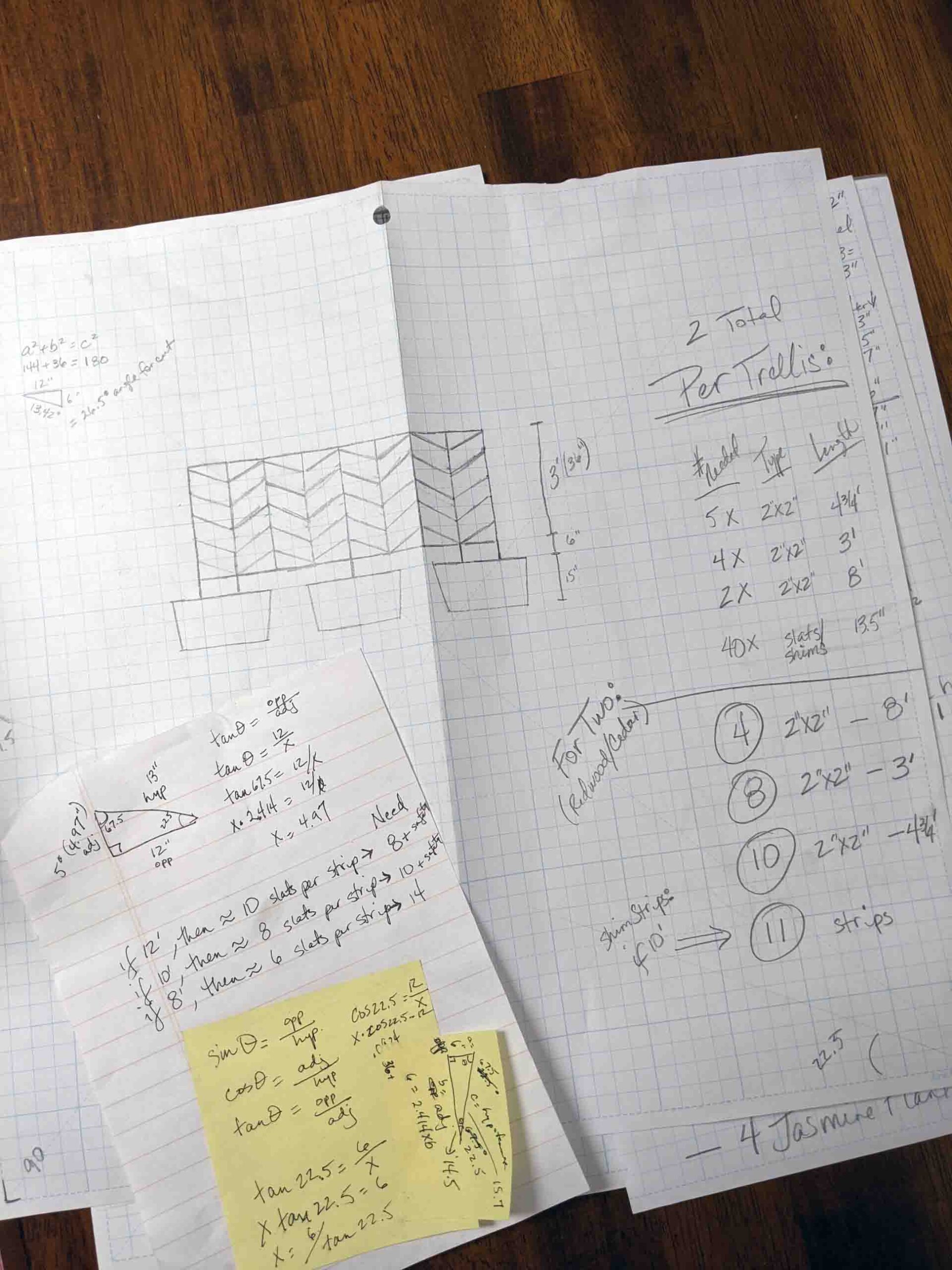 Y’all – I had to freaking math. Hard! It’s been yonks since I ventured anywhere near thoughts of trigonometry, so reacquainting myself with its equations was a task unto itself. But it wasn’t completely foreign. I guess since I once spoke the language of trig, albeit decades ago, it came back more quickly than I expected. And it worked. I was able to calculate my lumber supply needs fairly accurately and with very little overage. 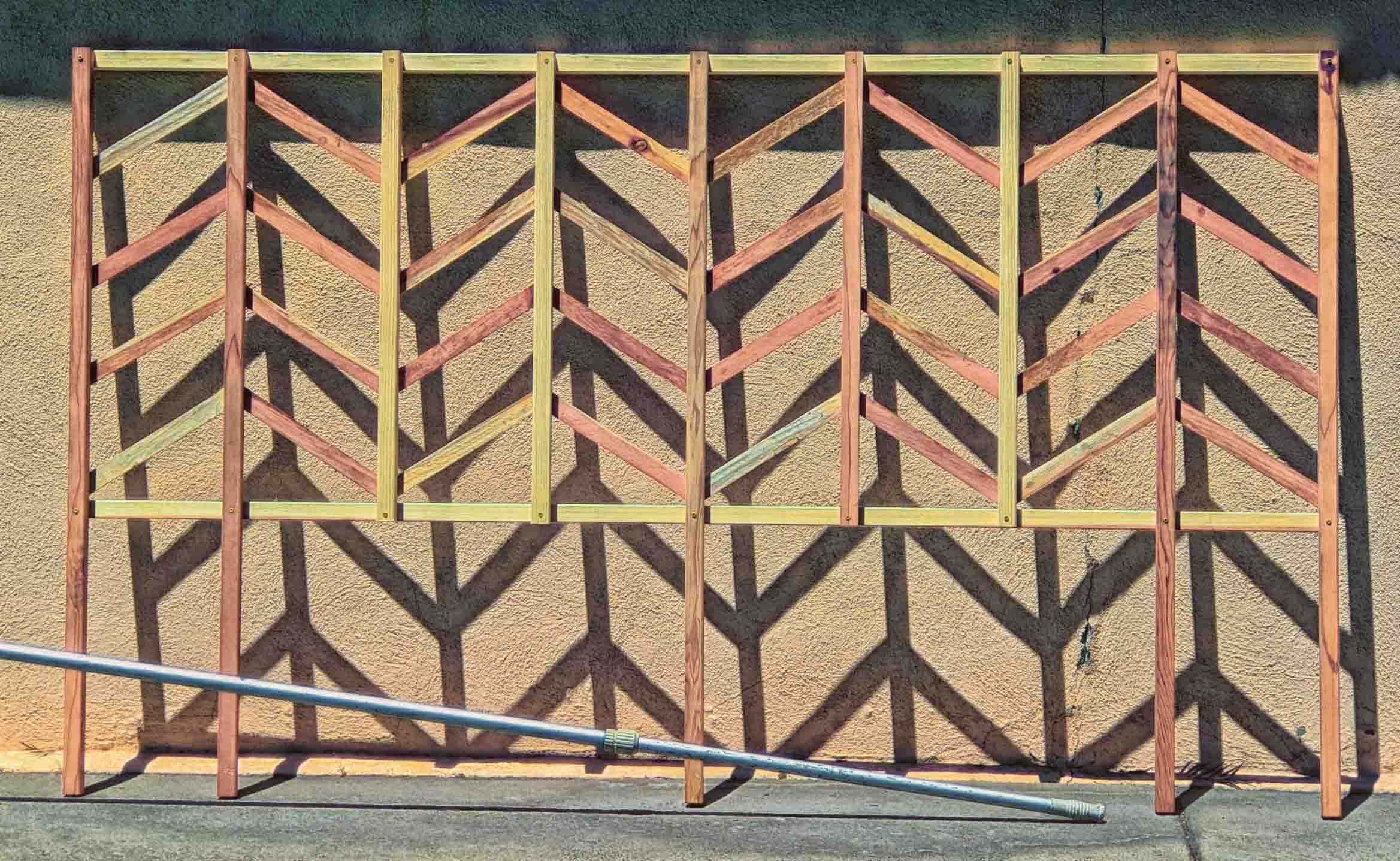 I built two trellises and I super-like them. Now I’m working on altering the fence portion above the wall. Fingers crossed… 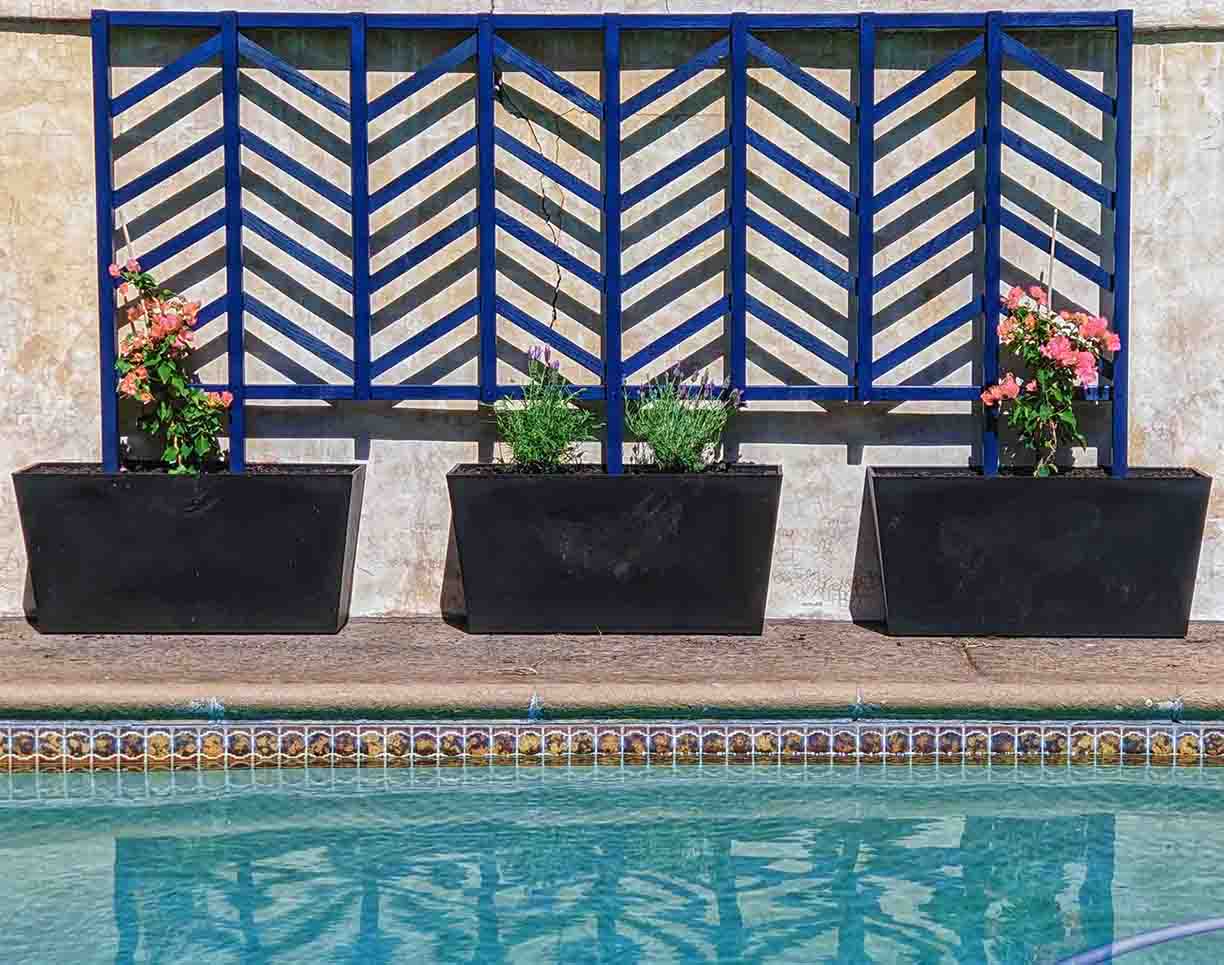 I’ve sewn things. A lot of things. Not just masks, though I’ve definitely made loads of those – for us and for others. I’ve sewn clothes, outdoor pillow covers, belts, chokers, hats… A lot. I’m not quite finished, which means my sewing machine and its accompanying mess is still choking up the dining room table. Not sure when that will be addressed. Even now, just thinking about it is causing my eyes to roll into the back of my head. Hope they don’t get stuck. Dag.

I’ve cooked, I’ve cocktailed. I’ve book-clubbed, I’ve zoomed. I’ve stayed alive. I’m vaccinated. I’m motivated. And I’m excited for the future. For my future. In the words of Mary Ann Evans (pen name “George Eliot”), “It is never too late to become what you might have been.” I’m taking that to heart. And I’m standing on the edge of where I’ve been, overlooking the valley of where I want to go. As I tighten and loosen my fists, I’m preparing to leap. I’m not afraid of falling. I fully expect to fly… 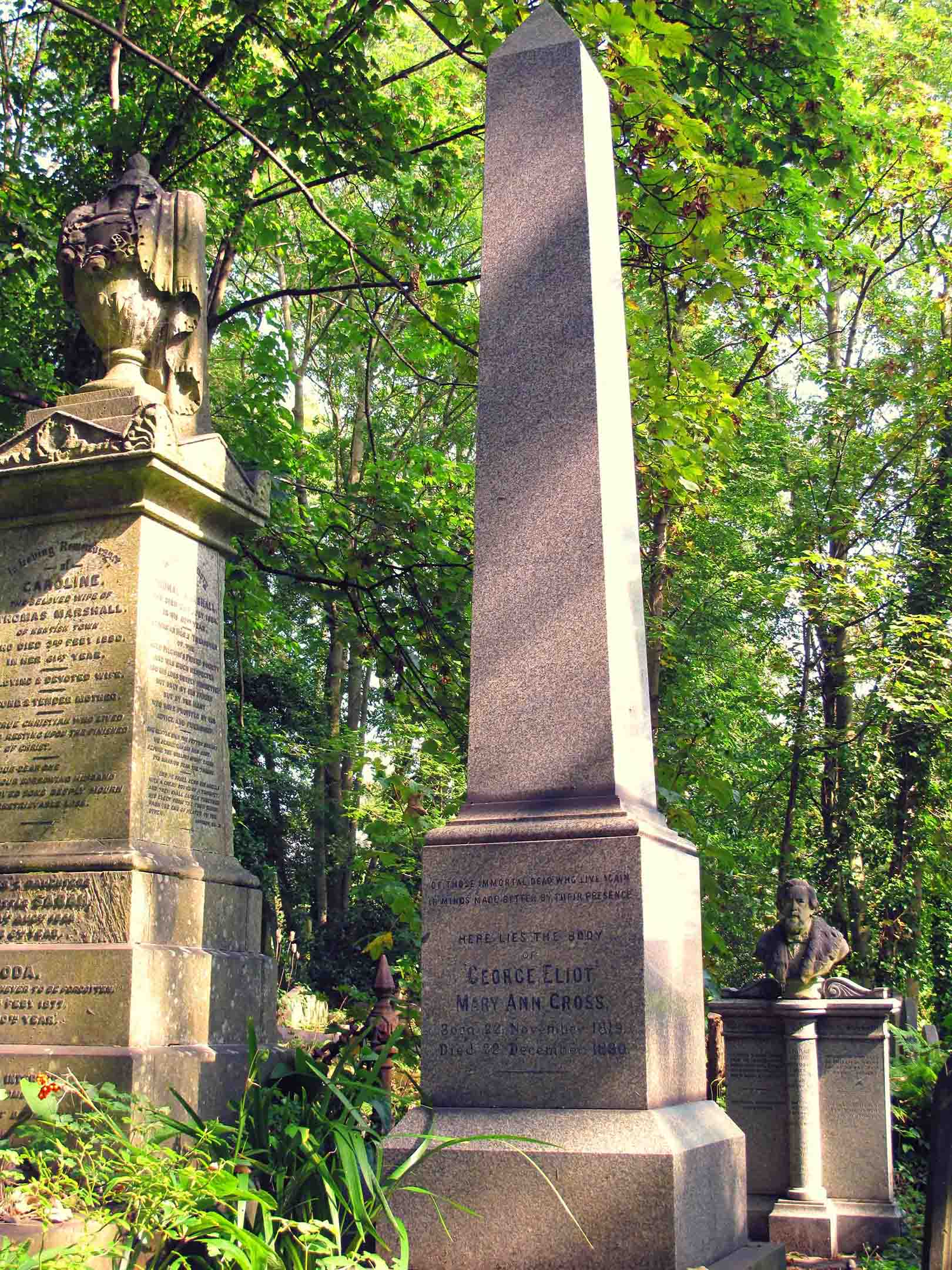 One thought on “The Edge of Where I’ve Been”