Usually when I close my eyes at the end of a day I can think back on my waking hours and come up with a few things I accomplished, things that help me to feel like I didn’t waste my time. I don’t know why I do this to myself, but I do. And honestly, it’s rare that I lie there feeling like a complete schlub who didn’t do a damn thing worth noting. Big things, small things – I count them. And that nightly ritual really helps me to like myself. It might not be how you roll, and that’s okay. But I am definitely habituated to this behavior and it generally serves me well.

When I come to the start of a new season, like today, I find myself trying to figure out what I did for the closing period. How did  I spend it? Did my choices make a difference for me or for others? Was it enough? Was I enough?

It isn’t always a kind process. Sometimes I’m really down on myself, or grasping for anything to count as time well spent. Those times are hard, and usually point to a period of self-doubt or low self-esteem. Sometimes I’m elated to recount three months of accomplishments and experiences. Most of the time, however, I hover somewhere in the middle. I recall a few fun things, a few moments of service, a few standout happenings. Middle of the road ain’t too shabby, y’all.

This summer? Well, it was odd. There was a lot of uncertainty in my little world. A big move seemed possible and because of that, I spent more time than you can imagine in Atlanta, Georgia. Because I’m a goer, I made the best of it. (It wasn’t difficult.) 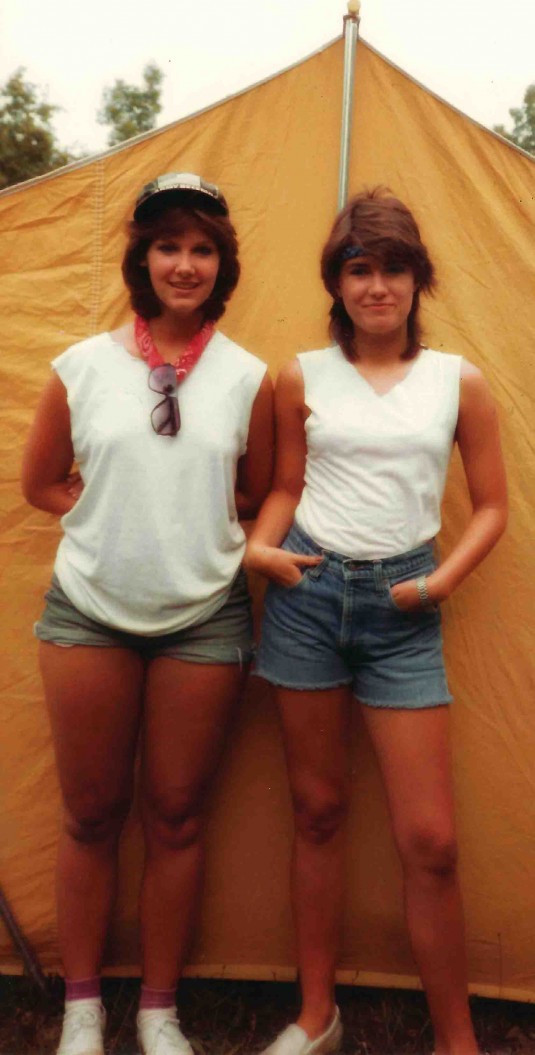 Mister and I spent a weekend in Athens, GA, with my sister from another mister, Lorinda. I have loved this gal since I was 13 years old. She’s even more fabulous than ever and I still love her.

I drank beer – gasp! At Creature Comforts in Athens, they know what they’re doing, y’all. For reals. While there, I took a photo with these two gals. I have no idea who they are. But I liked that they were willing to snap a pic with a complete stranger. And they smiled! Yeah – I dig that. 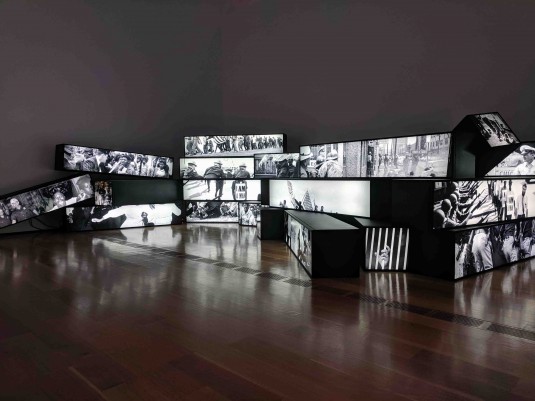 I went to the HIGH Museum of Art. I’m a museum junkie, so this was really a no-brainer.

I got to spend time with cousins. People I not only love, but actually like. 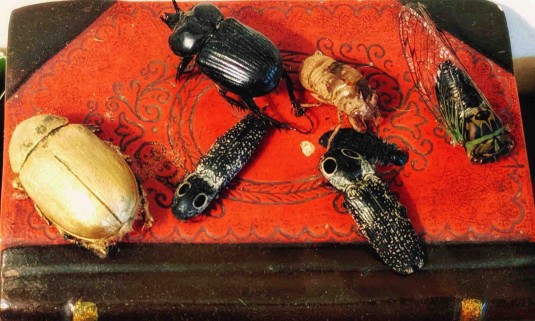 I found a kindred spirit in my cousin Kathy. She collects and displays beautiful dead things. I like that. A lot. 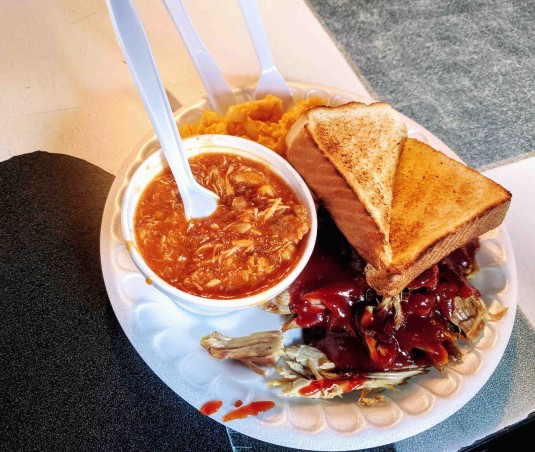 I made a quest to find delicious Brunswick Stew. People outside the South may not be familiar with this BBQ joint staple, but I’m not only familiar with it, but also obsessed. There are rules, y’all. When a bowl of Brunswick Stew is placed before me and I spy with my little eye a lima bean in the mix… Oh, lordy. That ain’t right. And that happened to me at a very popular place run by some Texans. Nope. I searched and searched and probably ate more little bowls of stew than most people consume in a year. On my last day of tooling around town, nearly defeated, I spotted this joint…

Daddy D’z. I went in, took a seat and a chance. When the food was placed before me, I appreciated the beauty, but I’d fallen for that before. I slowly took a bite… And then I started crying sweet tears of joy. That stew was mighty close to what I loved as a child. And I was grateful. 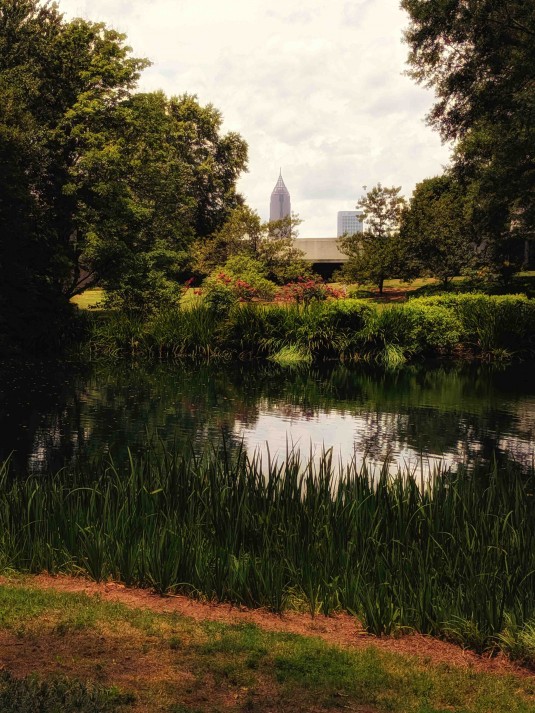 I went to the Jimmy Carter Presidential Library and Museum. Not only is the facility beautiful, it is fabulously inspiring. 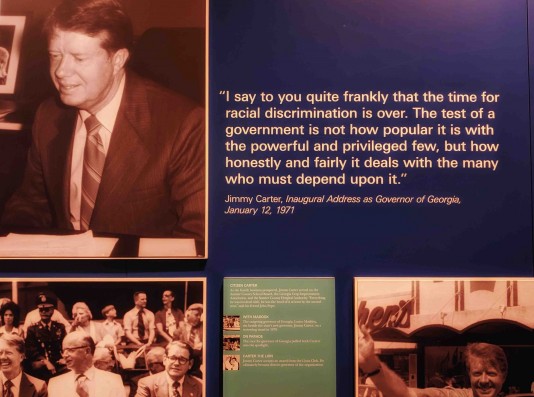 I thought I knew about President Carter, but I knew nothing. He is a beautiful human being and was a fabulous President. Not only that, but he’s done more for the citizens of this country – in his post-Presidency years – than most living Presidents combined. I took my time going through the Carter Library. I shed a lot of tears there. I loved it so much. I would happily go again. 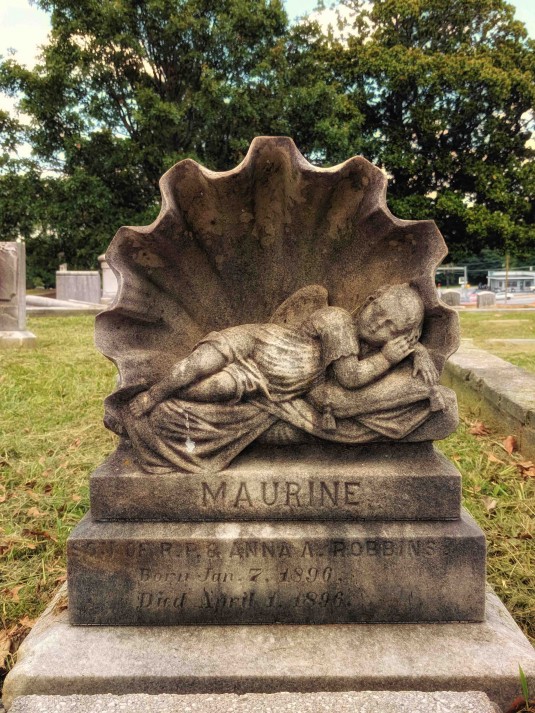 Because I love cemeteries, I tooled around Oakland Cemetery one afternoon. When I stopped in the visitors center, the gentleman there couldn’t have been nicer. He was also a bit misinformed, as he said that he’d been told Oakland Cemetery was more loved and better than the cemeteries of Europe. Had he gone to any of those, I asked. No. I told him that at first glance, Oakland looked to be a fine cemetery, but he might want to visit a few more before making such statements. 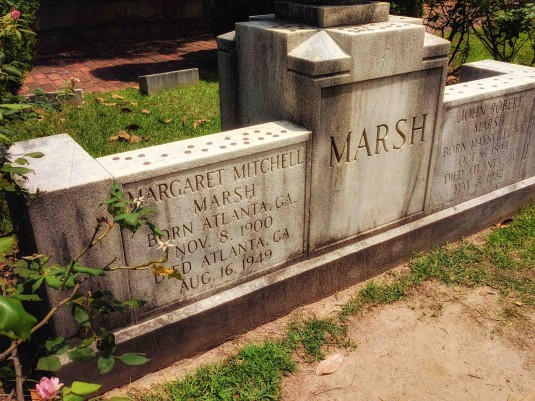 But it is a fine cemetery. Margaret Mitchell is buried there, if you’re into that. 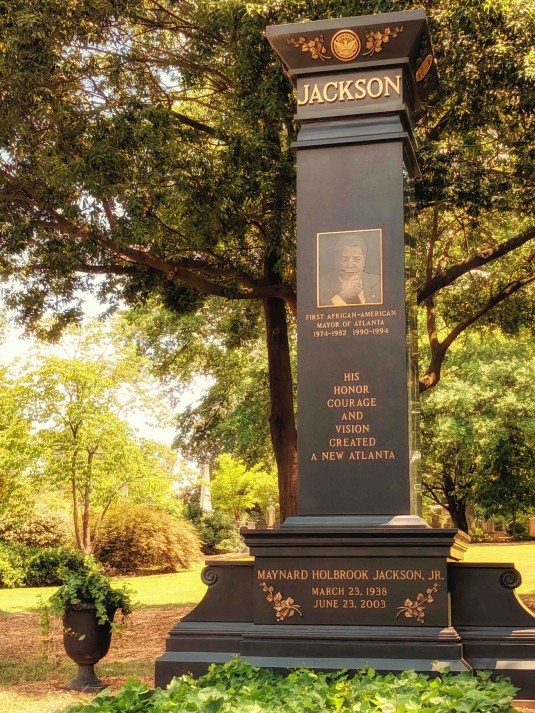 So is Mayor Maynard Jackson. His marker is beautiful. And here’s an interesting note about Mayor Jackson’s grave. In the South, the dead are buried with their headstones facing East, because that’s the direction from which Jesus will rise again, don’t you know. But Mayor Jackson’s marker is askew. It faces downtown Atlanta’s skyline, which can be seen from his burial site. He loved that city. 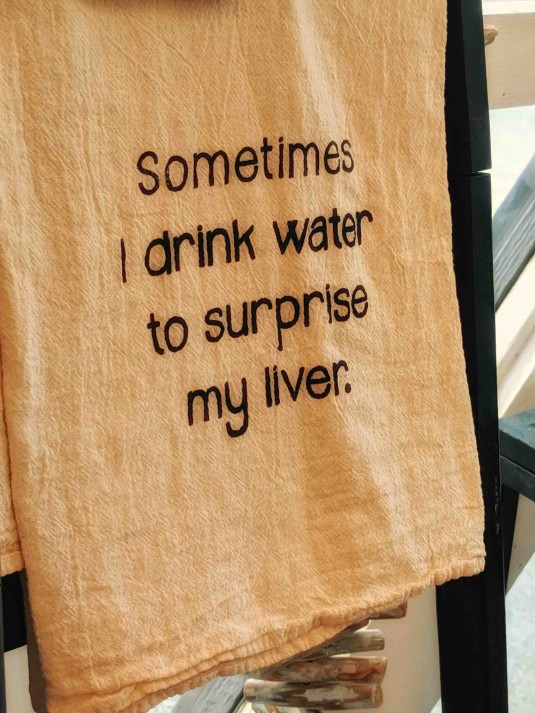 I rode MARTA all over the danged place and walked more miles than a sane person should have during the heat of a Georgia summer. I also drank a ton of local brews and talked with people from all walks of life. 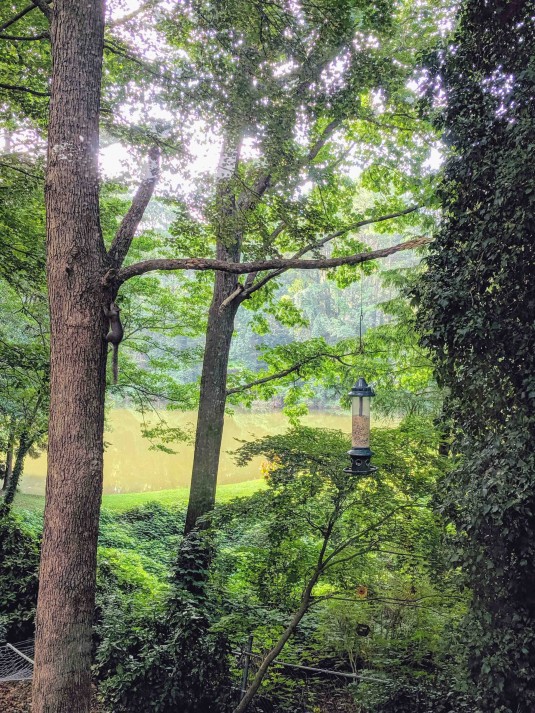 It was lovely to be there. Folks were great. The city was green and beautiful. I soaked up about as much of Atlanta as I could. 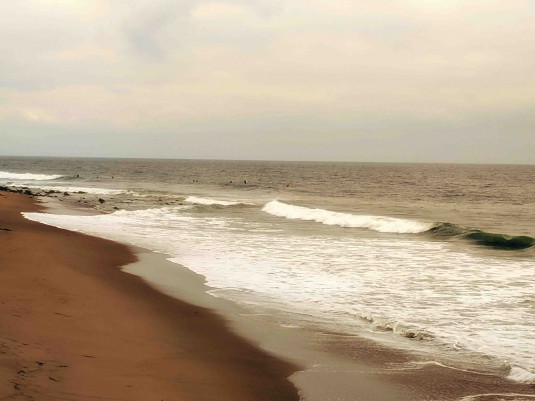 Closer to home, I spent a few days with friends in Malibu, which feels like another world. The booming ocean provided a beautiful backdrop for time with these adored souls. 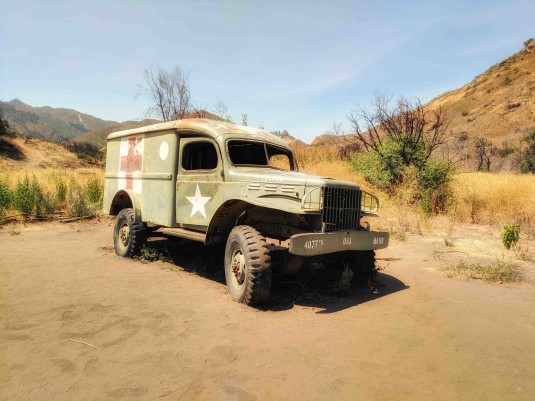 While in the ‘Bu, we hiked to the old M*A*S*H filming site in the Santa Monica Mountains. The hike itself wasn’t difficult, but the heat just about took me out. I will again do this hike, but will definitely bring more water. Dag.

Back at the homestead, I swam and swam and swam. Because we don’t have a pool heater, I try to get in the water as much as I can before the night temperatures drop so much as to cool the water beyond comfort for swimming. We made it until 14 September. That was the last day I could bear it. Once the water drops into the 70s, I get freaking cold. It bums me out once that privilege is done for the year. But that’s the way it goes.

And now, the light is changing. The daytime temps are still h-a-w-t, but the nights are quite comfortable. I’ve started studying different recipes, in anticipation of cooler weather. I’m ready to switch out my clothes for pieces not worn since winter. Social gatherings are increasing, as friends are back in town after their summer travels. Work on various projects has kicked into high gear. Autumn is here.

It isn’t lost on me that as I age I become more aware of the seasons. More appreciative, too. As odd as this Summer was, I found joy in its days. I rode out the unknowns and the difficulties and came out on the other side. And I loved it. 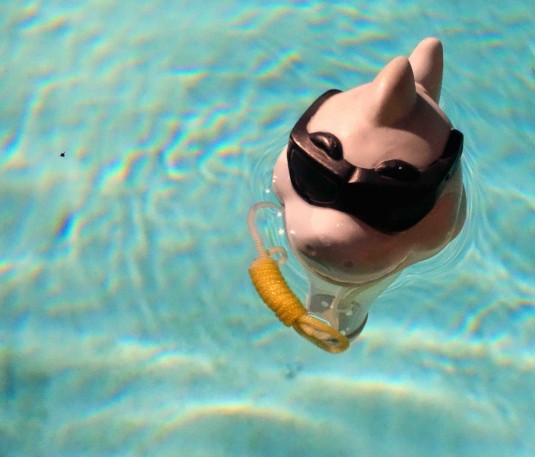 I don’t know how long I’ll be able to remember the way it felt to tread water for an hour, the water lifting my body and bettering my health, but I remember now. Maybe tonight, when I close my eyes at the close of this first day of Fall, I’ll list the moments that occupied my time, checking off what served me well. And then, if I’m lucky, I’ll remember what it feels like to float. To trust the water. To be in the world and of the world. In my own skin. 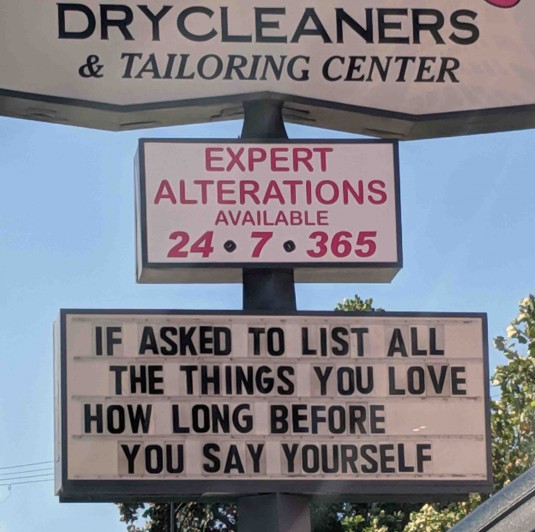