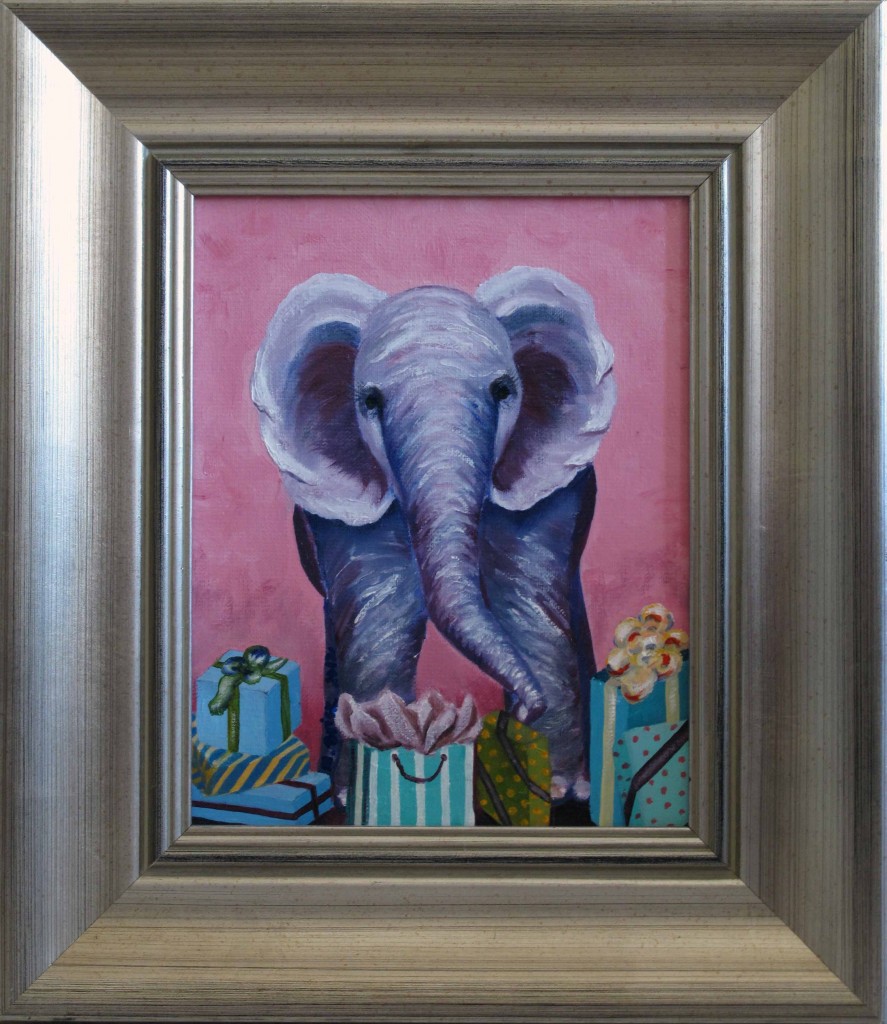 This little painting was done in jest. And there’s a very good reason for its existence. Well, there’s a good-enough reason…

Mister and I are friends with a dreamy gal named Tiffany. Each year, Tiffany throws a party – An Armenian White Elephant Exchange Christmas Party. It is always held in January. It is always packed. It is always major. Tiffany – who has Armenian heritage somewhere in her family tree – prepares an Armenian feast, a feast I start dreaming about in December. Everyone makes up an Armenian party name for themselves that must end in “ian.” (Someone brought their toddler a few years back – his name tag read “Cesar-ian,” which was indeed how he came into the world.) Guests bring something they’ve been given (or found or made – no buying allowed!) that is just a little, well, off. The wrapped “gift” is placed beneath the tree and the fun begins. According to numbers drawn previously, each guest takes a turn choosing a mystery gift. Sometimes there’s some really awesome stuff! Sometimes not. (Another gal’s trash and all.) “Stealing” gifts is allowed, but a gift may only be “stolen” twice. It can be quite competitive when good stuff is involved!

What constitutes good stuff? An elaborately embellished sombrero was a hit one year. So was an authentic “Golden Ticket” from Willy Wonka and the Chocolate Factory. One year a dude made a paper sculpture that must have taken him weeks. It was stunning!

What constitutes not good stuff? Well, there’s a mouth-blown glass sculpture of a penis packed away in a Pod in the desert somewhere. Need I say more?

Anyhoo, at last year’s soiree, I wasn’t doing the best job of dealing with life and was a bit out of sorts. Which is to say I got drunk. Fall-down drunk, to be precise. And when I did fall down, I broke Tiffany’s house. Not really, but that’s how I felt. And though she forgave me and even invited me back to this year’s shindig, I felt like I owe-skied. So I painted this little gal. It’s kitschy. It’s dorky. It’s hilarious, really. And I gave it to my friend last night.