We are smack dab in the middle of L.A. Beer Week and boy are my arms tired. Not that I just flew in or anything. Just kidding. That’s the kind of joke I tell when I’m all happy and hopped up on beer. Which I’m not, though I was on Saturday during the Kick-off Event in Downtown L.A. 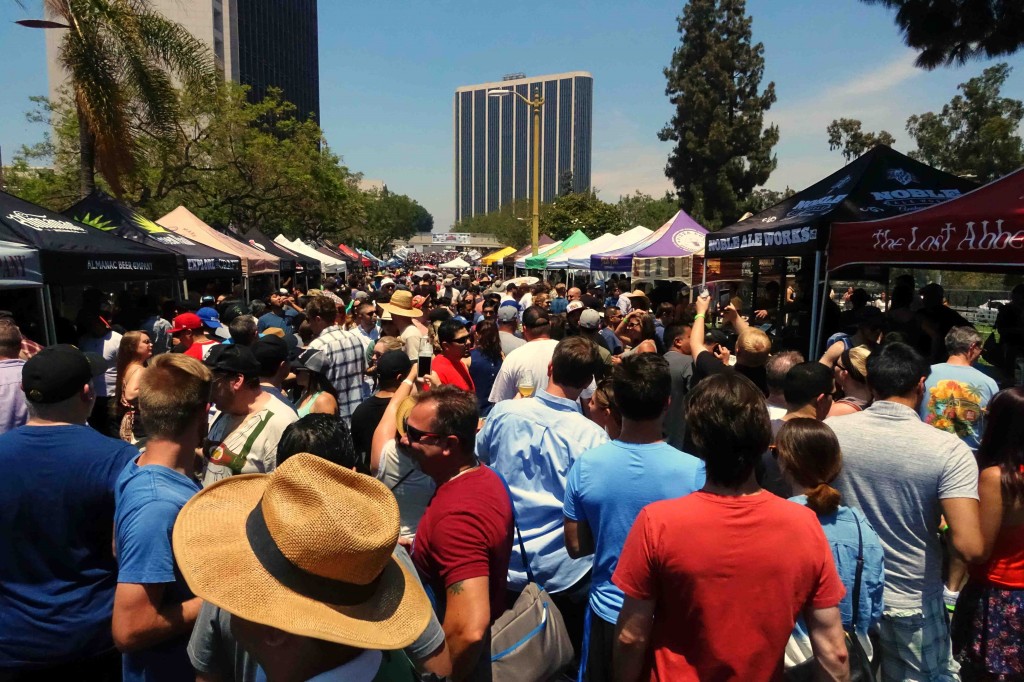 There were well over 100 brewers in attendance and Mister and I intended to do our hospitable best to visit almost if not all of them. It was a hot day, and we were feeling it. We took the train downtown, so that neither of us would have to stay sober and drive. And by neither of us, I mean me. Because y’all, 99.9% of the time, I am the designated driver. So hallelujah! I got to imbibe. 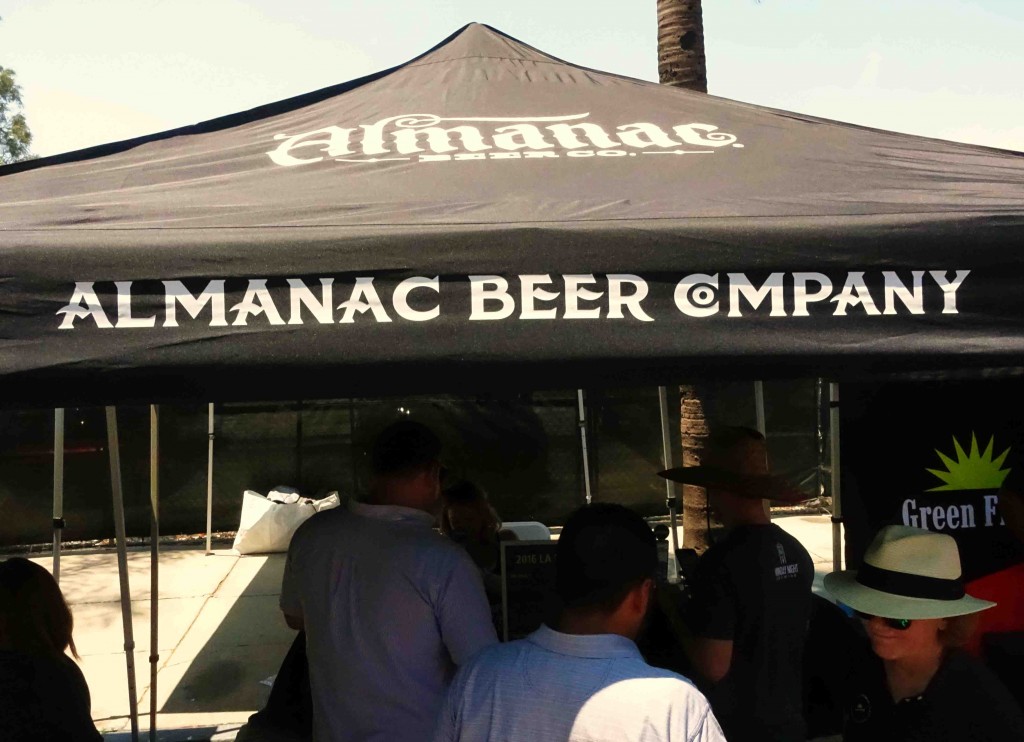 And imbibe I did. I made a beeline for the Almanac Beer Company tent, as they’re one of my favorite producers of sour beer. I was not disappointed, and may have gone back for another taste. Or two. 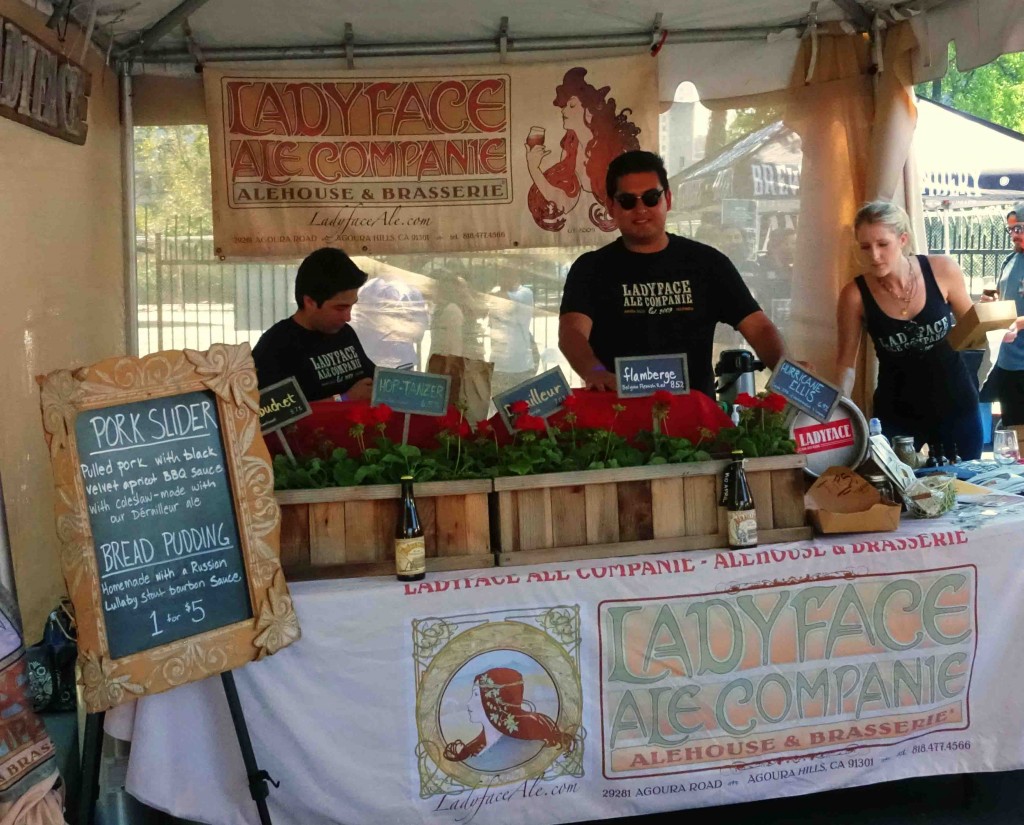 Mister had read about Ladyface Ale and that was another of our first stops. It was also another tent we hit more than once. Their Flamberge was amazing and I absolutely adored it. Truth be told, there were loads of excellent local brewers in attendance and we did our best to try them all. Even though Mister took photos of the beer taps we enjoyed the most, I only managed to mentally hang on to a few examples. I should blame the beer, but I don’t. Instead, I blame the heat. 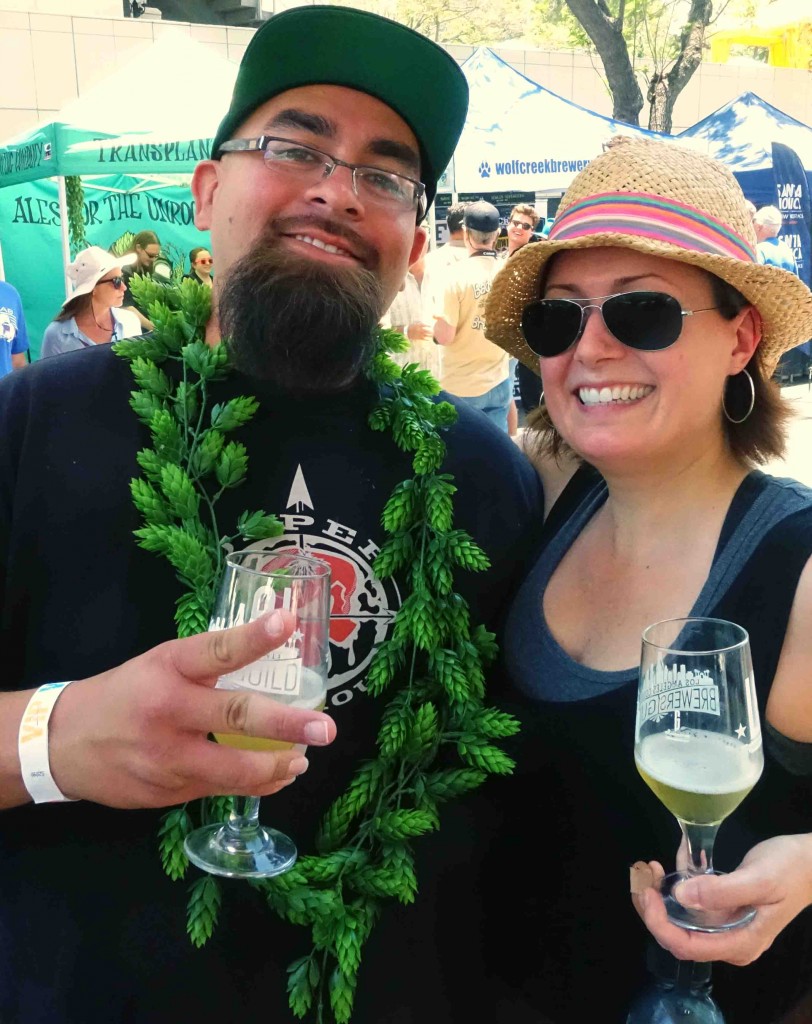 Let me say again that it was hot. H.A.W.T. Both of us had slathered on the sun screen and we felt fairly prepared. I was drinking water and snacking here and there… 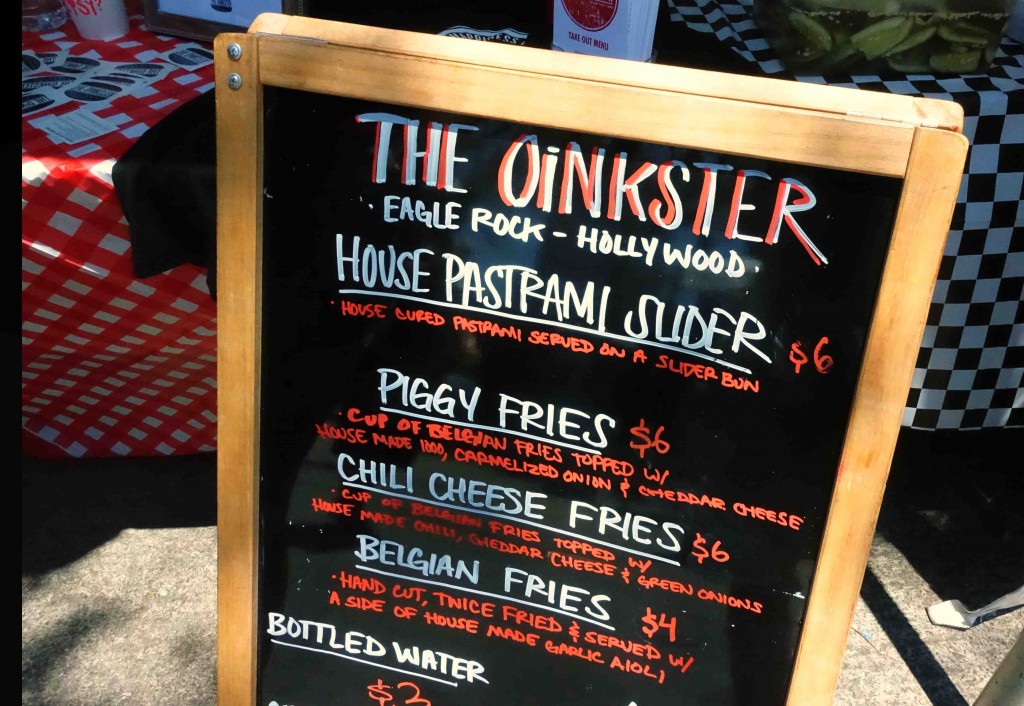 …so the beer wasn’t knocking me out or anything. But by the time our friends Cher and The Professor arrived at the event, I was fairly sated. But sometimes you’ve got to dig deep and show up for your mates. That’s how I felt anyway, so I kept on tasting. And watering. And snacking.

Another thing I did was treat the event as a true tasting, as in when I’d had enough of a particular sample (or simply didn’t care for it), I dumped my portion into one of the many swill buckets stationed around the scene. Honestly, I didn’t think much of that action until The Professor saw me doing it and nearly had a conniption fit. I’m fairly certain he suffered a small stroke when he witnessed perfectly good beer being thrown away. 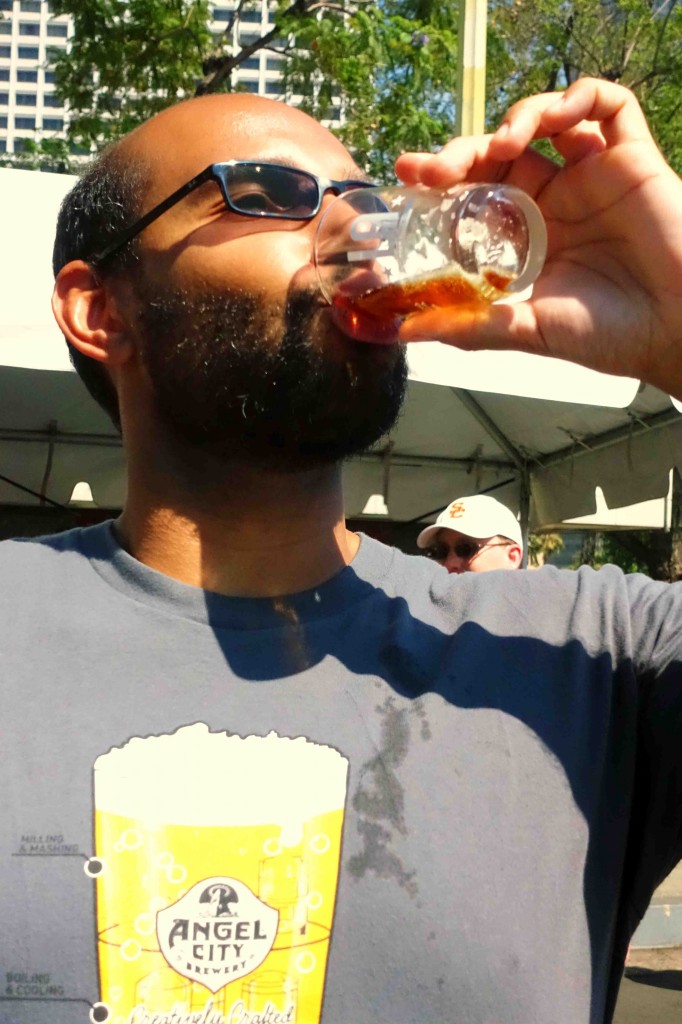 After four hours of fabulous beer, it was time to go home. Cher and The Professor gave us a lift to the train station, then started their drive south. Mister and I boarded the train and talked about the day. Mister was working on figuring out how much we’d actually had to drink over the course of the event. For me, he guesstimated about a half-gallon. For himself, he doubled that. I told him he was crazy, because if I drank a half-gallon of beer I’d be so many sheets to the wind, I could be Martha Stewart’s linen closet. 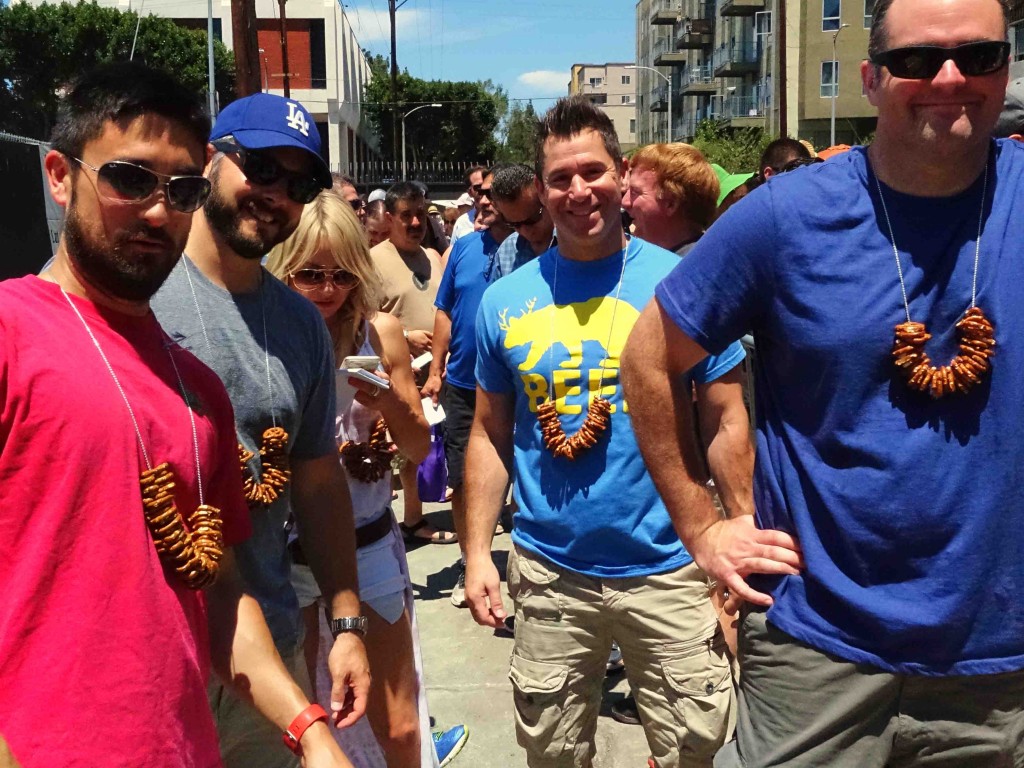 Once we reached home, I started to think a bit differently. It was barely 5 o’clock and we were both struggling to stay awake. Even though we’d used sunscreen, the sun had broken through that barrier and had toasted various parts of our non-SPF-ed bodies. Too tired to cook, we ordered a pizza and put our feet up. 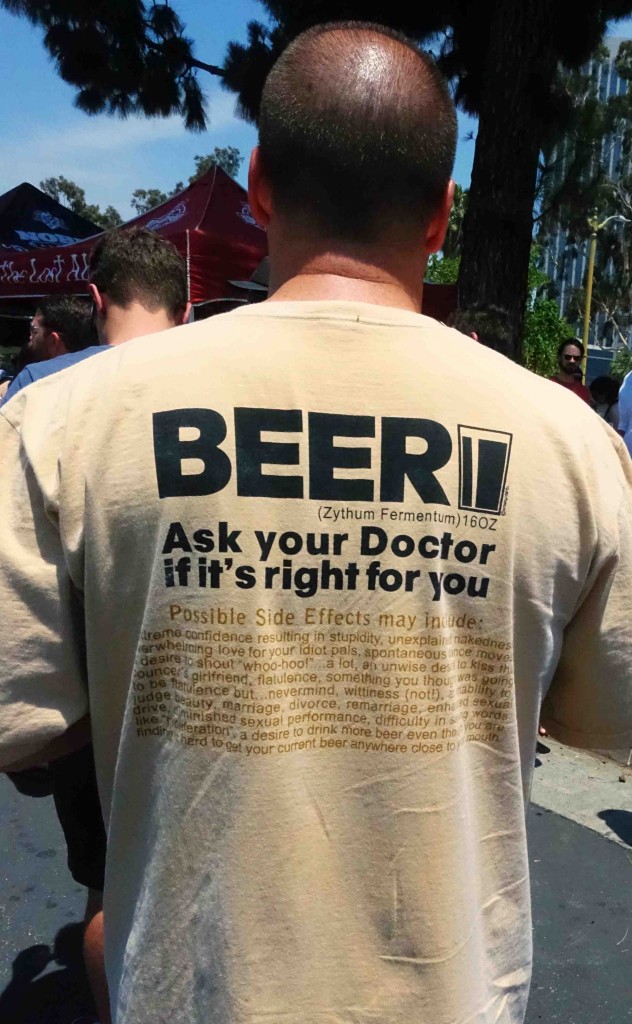 I was pretty pleased with L.A. Beer Week’s kick-off event. We had some amazing beers. The crowd was friendly and happy. All in all, it was a fabulous day. I can’t hardly wait for next year’s tasting.