Last Friday I gave myself a gift: fun. I heard about a 3-day auto auction, taking place at the Burbank airport Marriott, and kind-of, sorta, really wanted to go. Once I learned day passes were available, I couldn’t come up with a single reason to deny myself.

I love old cars, y’all. This isn’t news. And I tend to check out auto shows once in a while. But I’d never been to a car auction, and since this one promised to feature some of the Petersen Automotive Museum’s collection, I figured I couldn’t miss.

When I arrived, the day’s auction was already underway. I decided to wait on that, and made my way outside to check out the available cars. I was sooooo not disappointed.

There were cool cars… 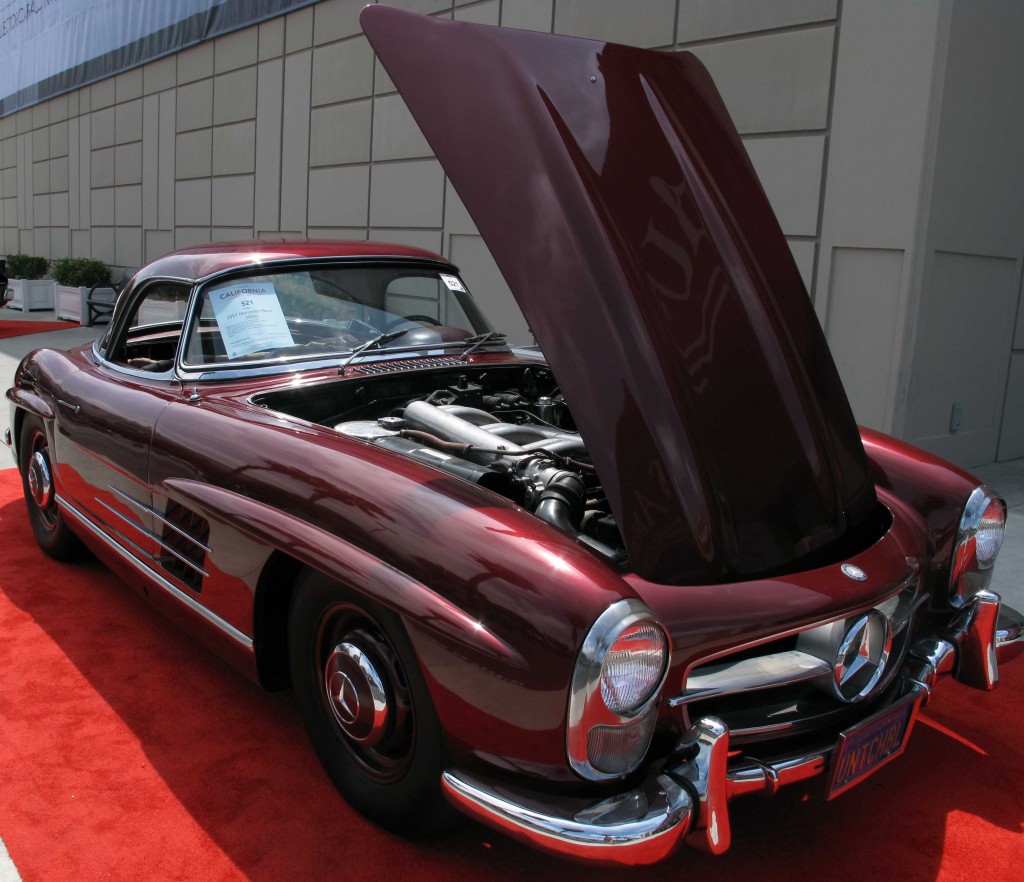 There were crazy cars… 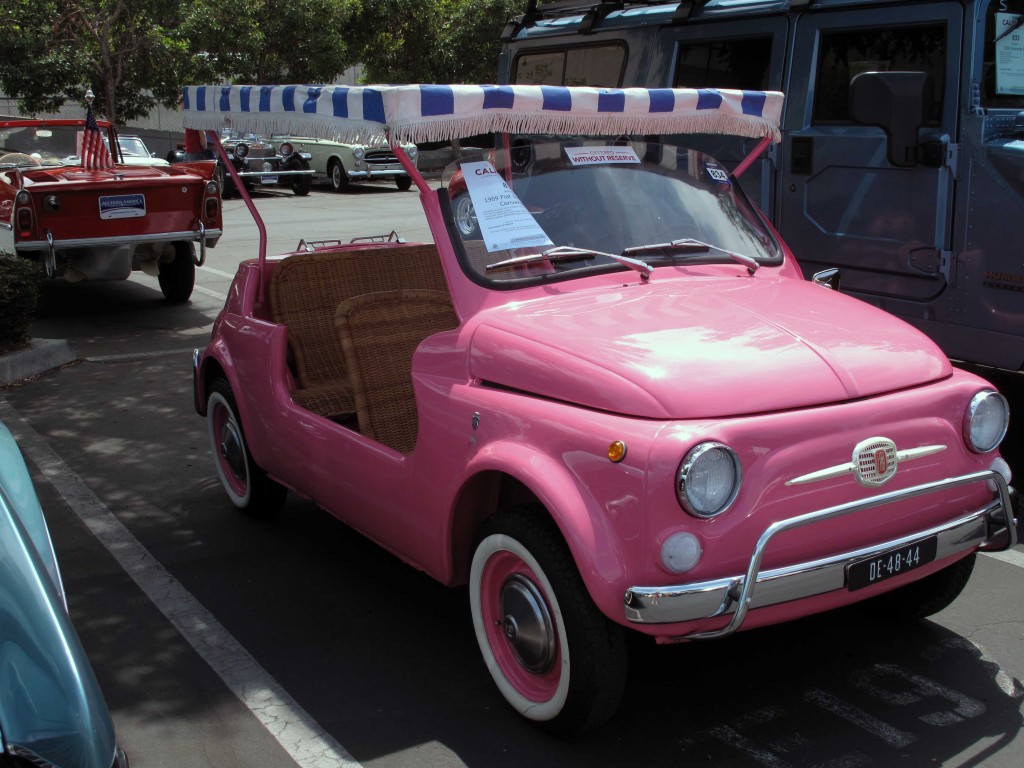 There were zany cars… 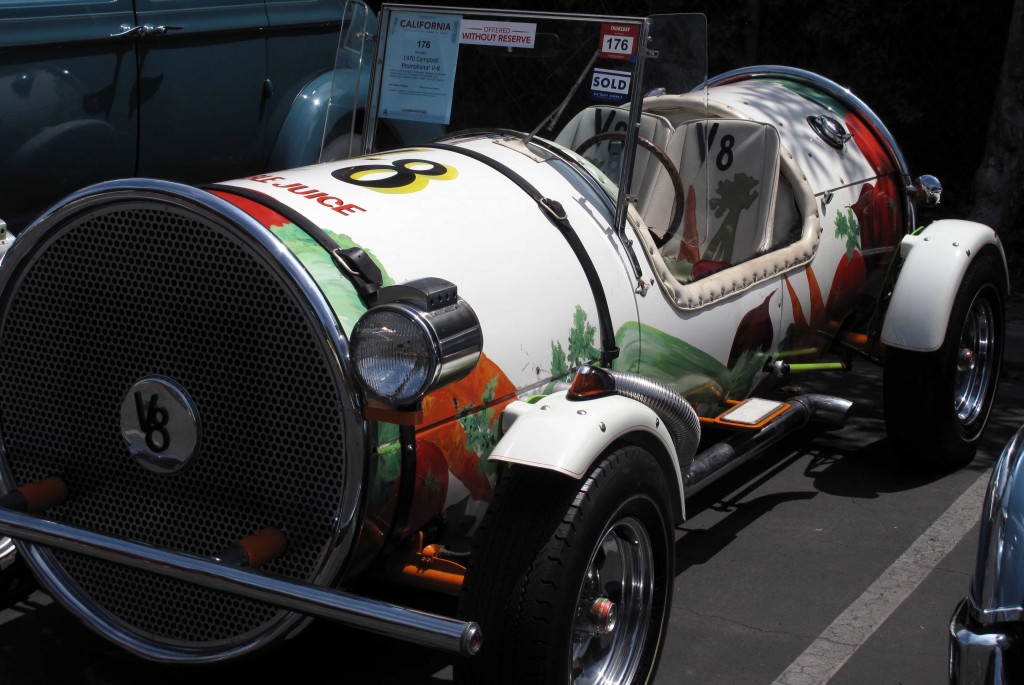 There were beautiful cars… 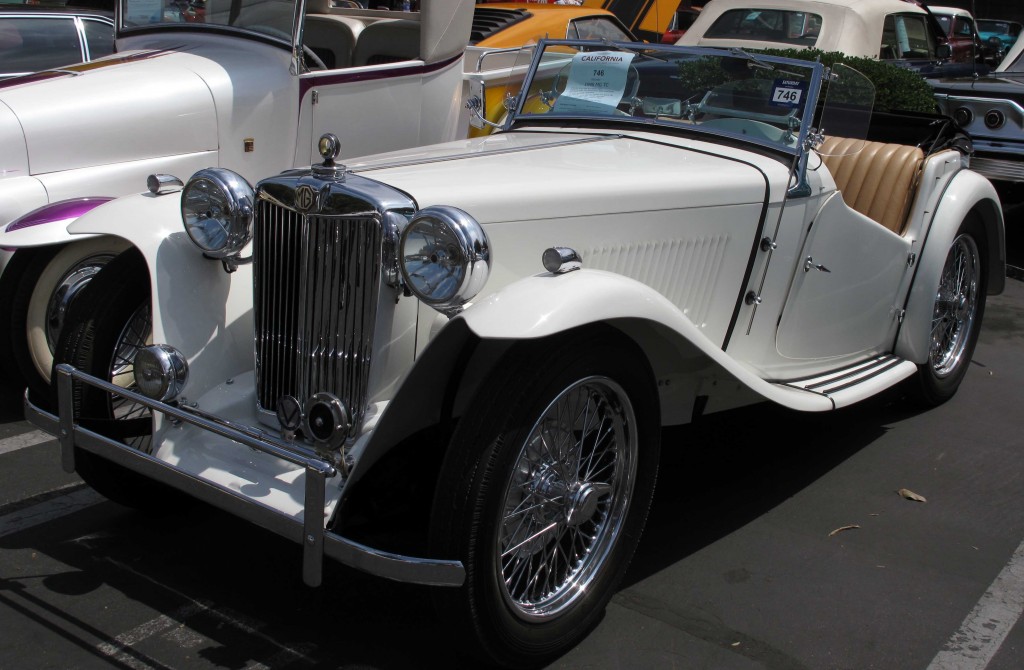 There was even a boat-car! 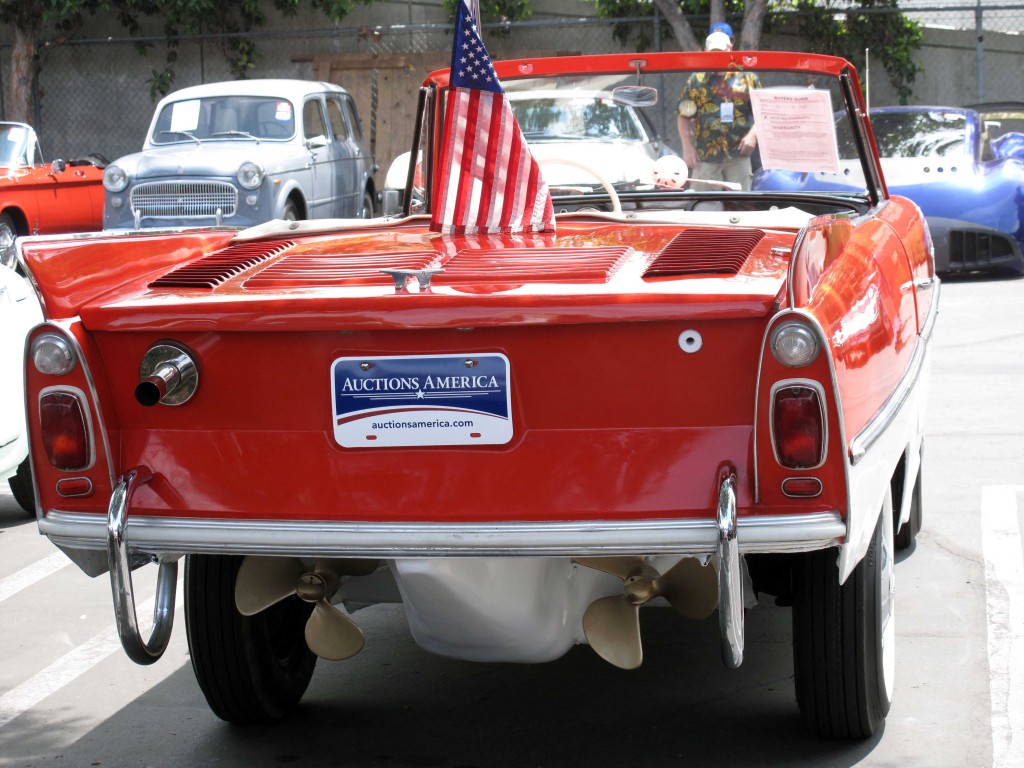 By the time I’d killed my camera battery, I was ready to head inside to experience the auction. At first, I thought it was mildly interesting. The cars at that stage of the day were going for as little as $5,000. Only a couple were making it up to the mid-teens.

But then the cars grew more interesting, and so did the auction. The mixture of both classic and more recent vehicles provided something for everyone. For instance, a 2001 Chevrolet Corvette convertible came up and the bidding went to $44,500. Know what happened next? Nothing. That number didn’t meet the seller’s required reserve amount, so there was no sale. Wow! 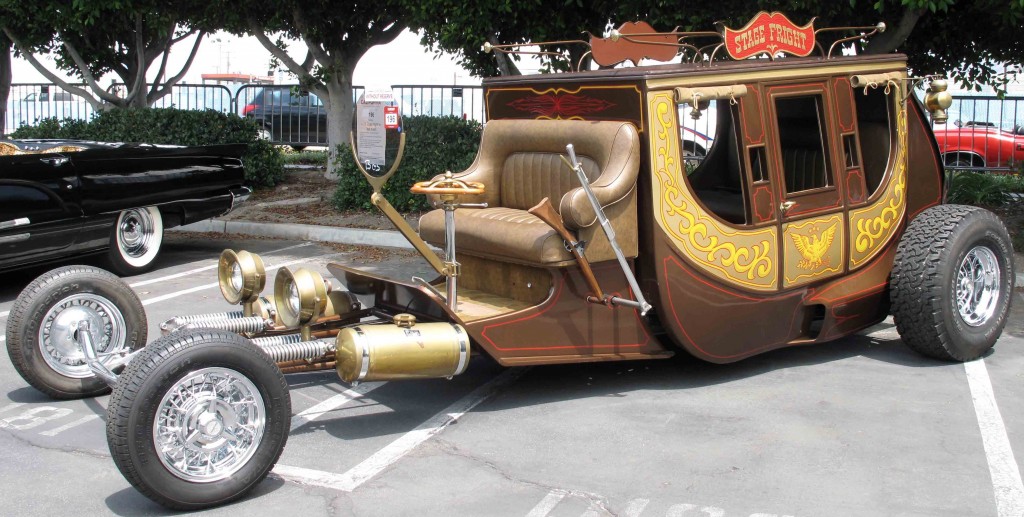 Not every vehicle had a reserve. I witnessed a stretch of 19 cars, with release dates ranging from 1922 through 1976, and not one of them had a required reserve. Basically, that meant that if someone bid $5 for a car and no one else bid against them, they could have gotten the danged auto for – you guessed it – $5. That did not happen, mind you, but it could have.

It was during this long stretch of “No Reserve” vehicles that I experienced some major excitement. I happened to have been sitting behind one bidder who decided to make his move on a 1932 Cadillac, V-8 Five-Passenger Convertible Sedan. I wasn’t so impressed that someone near me was bidding, as that was happening throughout the hall. No, I was impressed to see – upclose – how the auction’s employees worked to keep the bidders going. The guy in front of me appeared to have been done at around $40,000. But I swear, one of the auction dudes came up to that bidder and egged him on, saying things like, “You’re only $2500 away from being a winner.” And, “I hate to think you’ll be regretting this for the rest of your life.” I couldn’t believe it, but that actually worked! When the dust settled and the applause died down, the guy in front of me had gotten himself that ’32 Caddie – for $63,000 (plus the required 10% auction fee – in this case, $6,300). 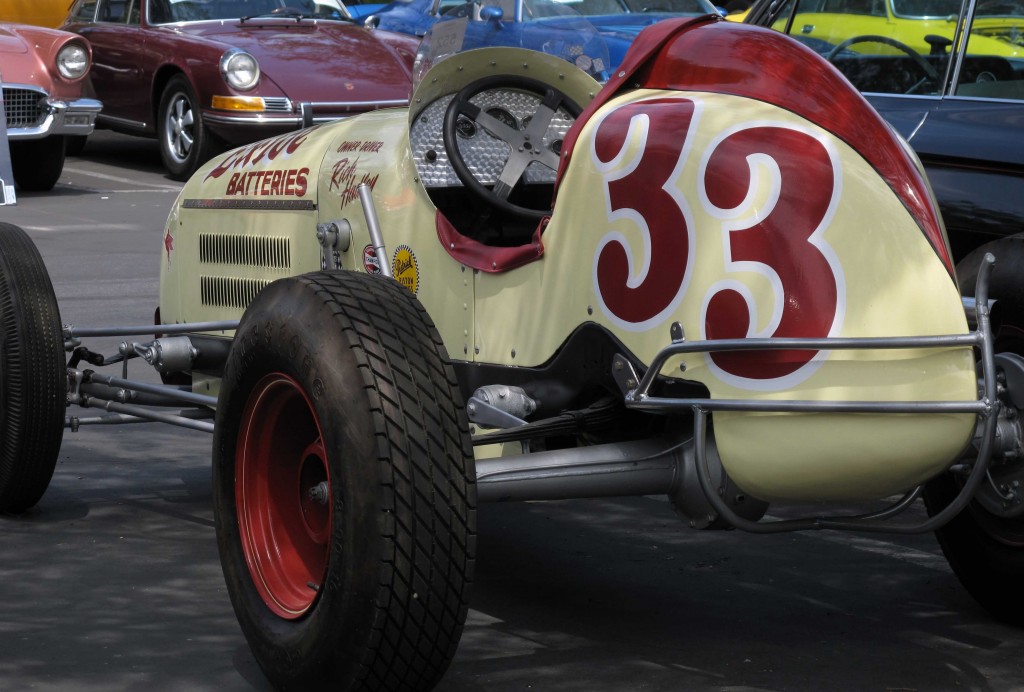 My love of cars doesn’t equal my knowing a dang thang about them. When the super-old models came up, I thought they’d go for the most money. But that wasn’t always the case. And no one seemed surprised. On the other hand, when a 1961 Mercedes 190SL Roadster sold for a mere $60,000, everyone was shocked. It had been expected to fetch at least twice as much. Go figure.

Anyhoo, the excitement I experienced hit two very big highs, and they were both centered around the same make car: Packard.

The first was a 1929 Model 645 Deluxe Phaeton. This was a spectacular car, to be sure. And I was swept away by its beauty. But I had no idea the bidding would be so fierce! There were phone bidders, on-line bidders and real-live people bidders. It got real, y’all. And fast. I had a hard time keeping up with all the action, and before I knew it, that magnificent specimen had sold for $122,500!

I watched a bit more of the auction, then realized I could stay there until they kicked me out. I decided to tear myself away and head home. I had been there for hours. 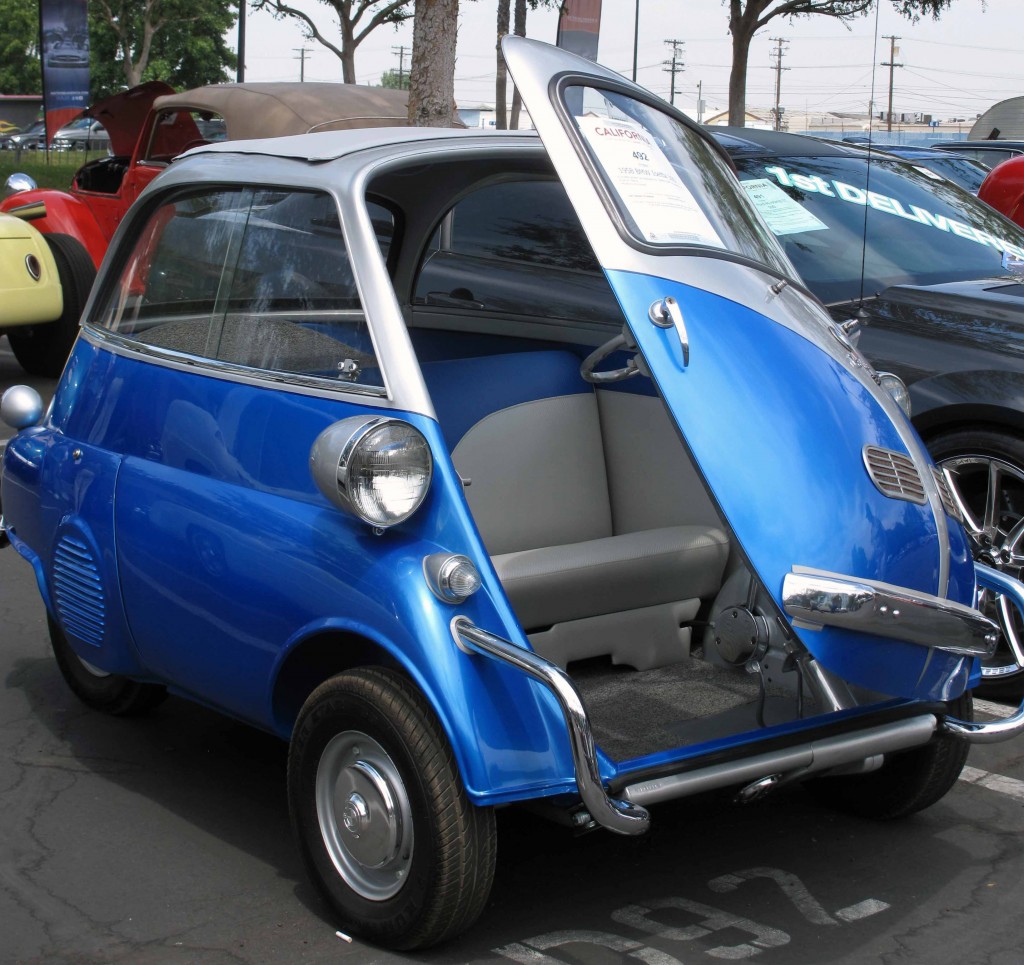 I know cars don’t ring bells for everyone. And that’s okay. I didn’t go to this auction because I’m in the market (I’m not). I just thought it would be fun. And it really was! I had such a good time! And I’m guessing the various actors, musicians, race-car drivers and regular folk who were also there had fun, too. It was a weird – for me – day. I guess a gal just needs weird, once in a while. Word.