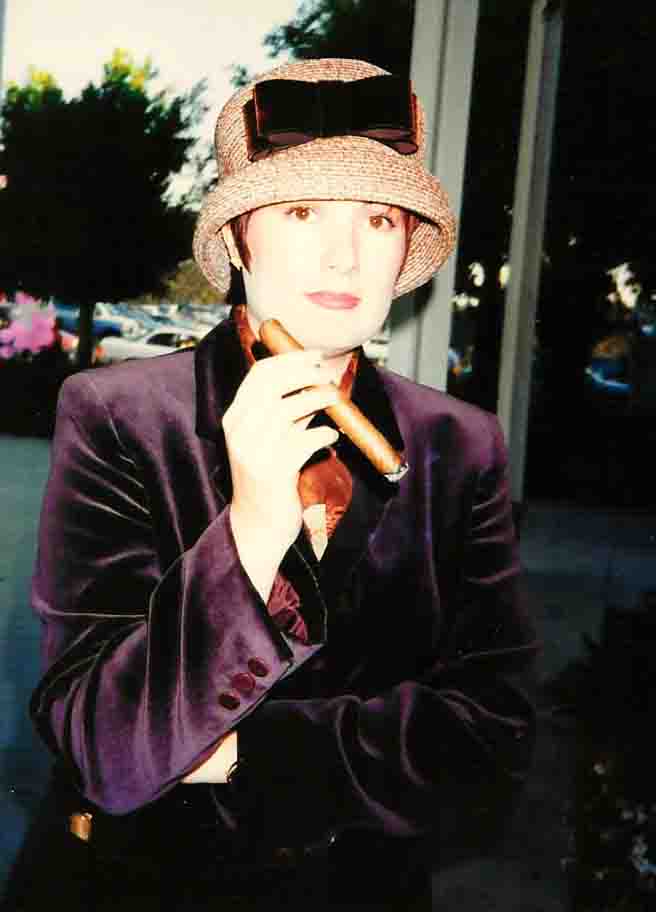 The photo above was taken 20 years ago. (Gulp.) Look at me – I was cute, for cry-eye! I loved that outfit. The skirt is long gone, but I still have the hat and the velvet jacket. When I wear them now, I get loads of compliments. I guess my old clothes now qualify as “vintage.” Go figure.

Now that I am my age (ahem), compliments aren’t tossed my way as often as when I was younger. Mind you, I go about town in my work/painting clothes most of the time, and I’m not on the make. I’m past flirting to get my way and I’m also past tempering the truth to make others feel better. So not only do I walk around in the world looking like trash, I also don’t hold back when I encounter a jackass. For example, perhaps I should offer apologies to the pharmacist who said he’d gotten the dates wrong on my prescription because he’s new, which led to me telling him that if he’s new to numbers, he’s in for a rough road no matter where he works, as using numbers for dates isn’t new and that maybe he should come up with a different weak-sauce excuse for the next time he screws up. But I didn’t just meet me. That guy will not be getting an apology. But I digress…

Don’t get me wrong. I don’t go fishing for compliments. I am generally happy in my own skin, which negates the need for external validation. But I am human. And I do respond favorably to authentic, nice words (especially on those days when I’ve relied on the kindness of lipstick, earrings and a comb). I also respond to not-so-nice words. And those times, rare though they are, are a bit bleak. (I’m talking to you, lying pharmacist.) I once had a dear friend who repeatedly made fun of the way I dress. I know how I dress. I know my taste isn’t for everyone, and I’m cool with that. But you don’t say mean stuff about something so shallow to your friends. Dag. You don’t act like that with anyone. It’s lame. And ugly.

Anyhoo – yesterday I was out in the world and I got not one, but two (count ’em – two) compliments from strangers as I went about my bidness. I didn’t have my lady parts hanging out, and I wasn’t wearing make-up, so I don’t know what the hell was going on. Maybe L.A. was experiencing a group-high. Maybe the weather agreed with me. Maybe the fact that I was consciously aware of being grateful during the day showed on my face. I really don’t know. But I don’t have to know.

When I told Mister about my 1-2 punch of compliments, he said I should take it where I can get it. Wise man. I should probably remember to compliment him on that.