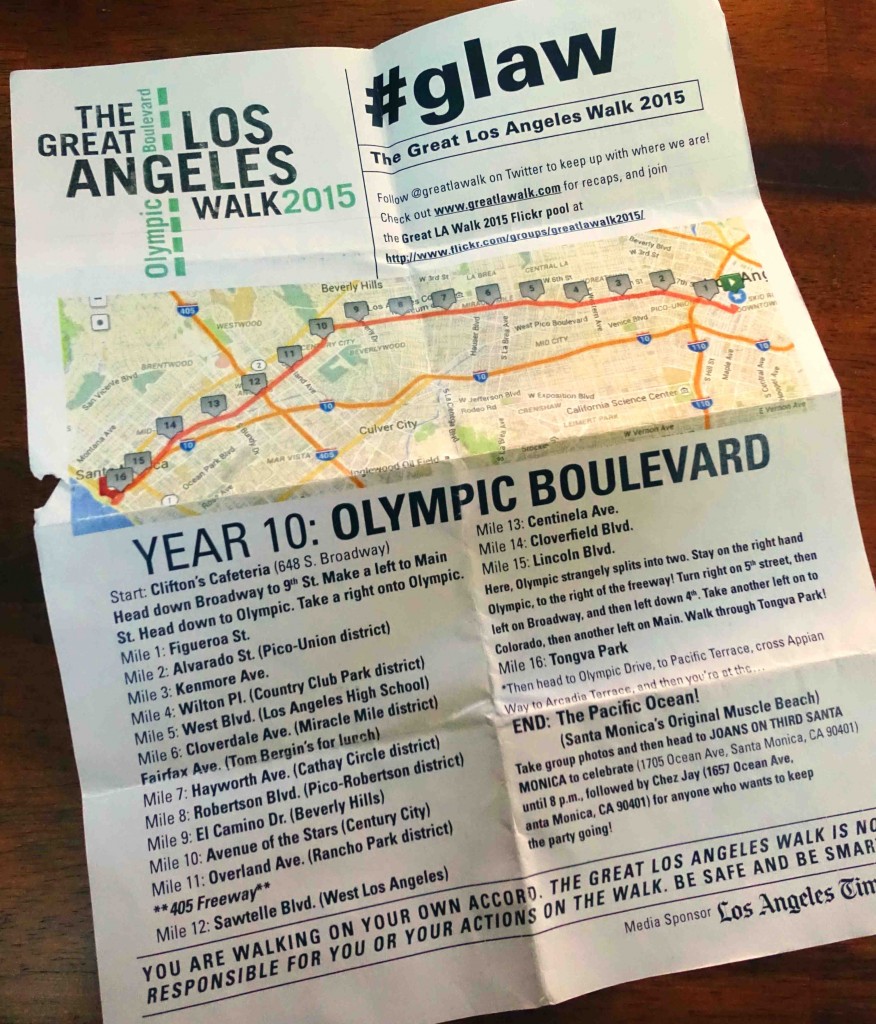 My intentions were true. So when I got a scratchy throat last Thursday night, I was surprised. Was I coming down with something? Really? And then on Friday morning, I woke with a fever. Not good, y’all. So I emailed my buddies to let them know I might not make it. And I waited…

A few months ago, I decided I would once again participate in The Great L.A. Walk (or GLAW). Each year GLAW goes down on the Saturday before Thanksgiving. The route changes from year to year, so I was looking forward to seeing what was in store. When I did the walk 3 years ago, we traveled across the city on Melrose and that made for some good eye-candy. Hearing this year’s walk would be along Olympic Boulevard was exciting. I barely ever drive that road. I certainly haven’t walked it. So I reached out to some friends and enlisted a few to join me. I started preparing by walking more and hoping I’d survive. Getting a fever the day before the walk threw me for a loop. But I decided that if I did indeed have a fever the morning of the walk, I’d bail and take care of myself. I knew I’d be sad, but I’m a big fan of health and I don’t want to knowingly disrupt mine. When Saturday morning rolled around, I checked myself and I was fine. No fever! 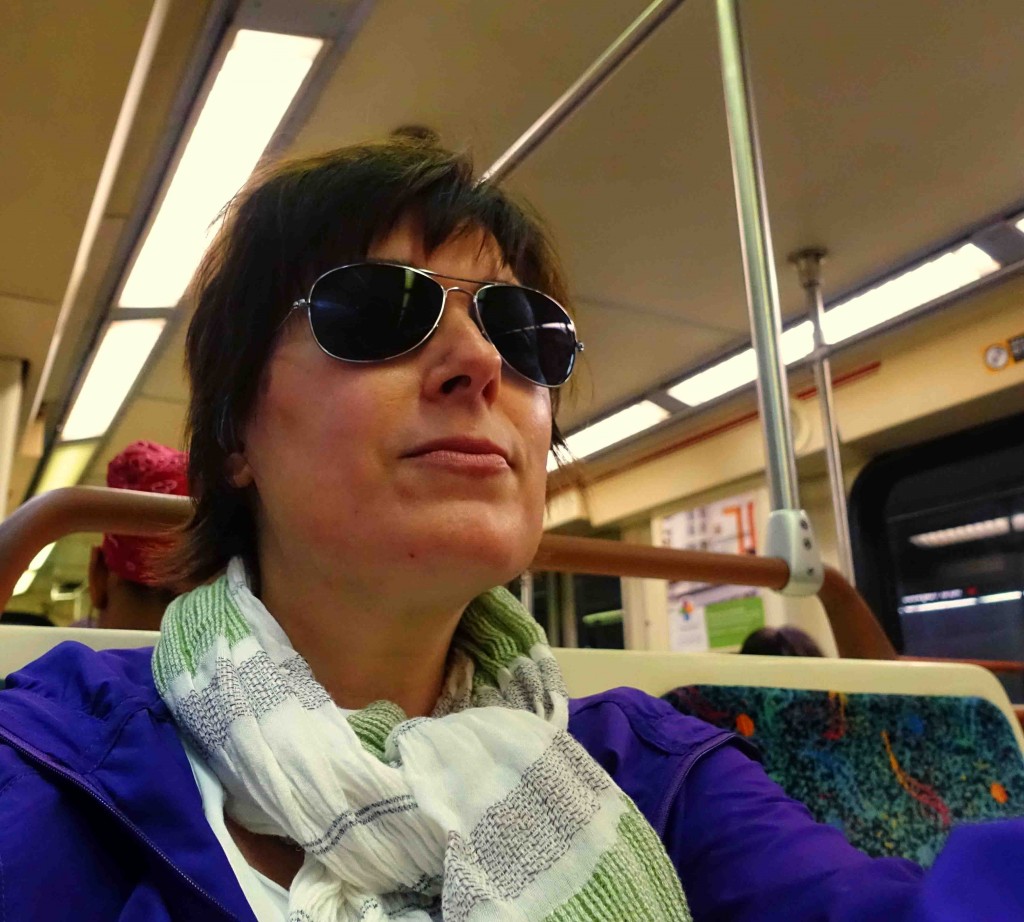 So I dressed and loaded my backpack with way too many supplies, then got Mister to drop me off at the train station. I made my way downtown to meet my friends and to get it going on. 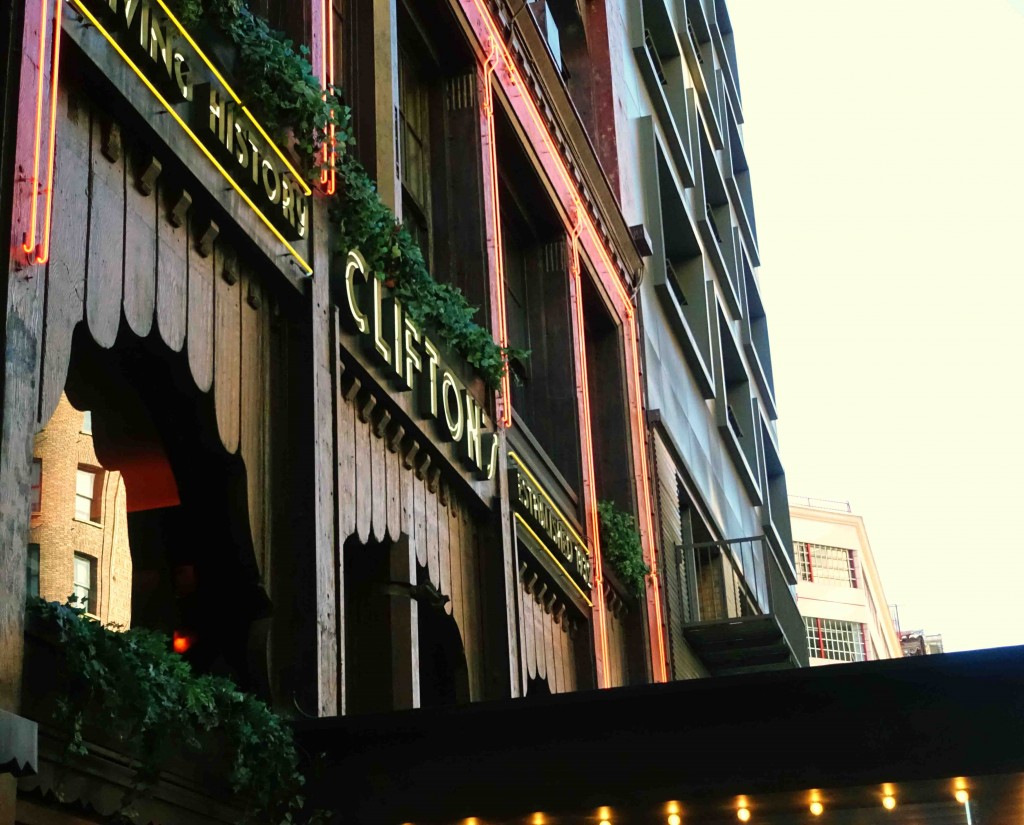 GLAW began at Clifton’s Cafeteria, in downtown Los Angeles. This historic joint recently re-opened, after a massive renovation. It’s very cool and kitschy and it’s been on my list of places to see. Bonus! 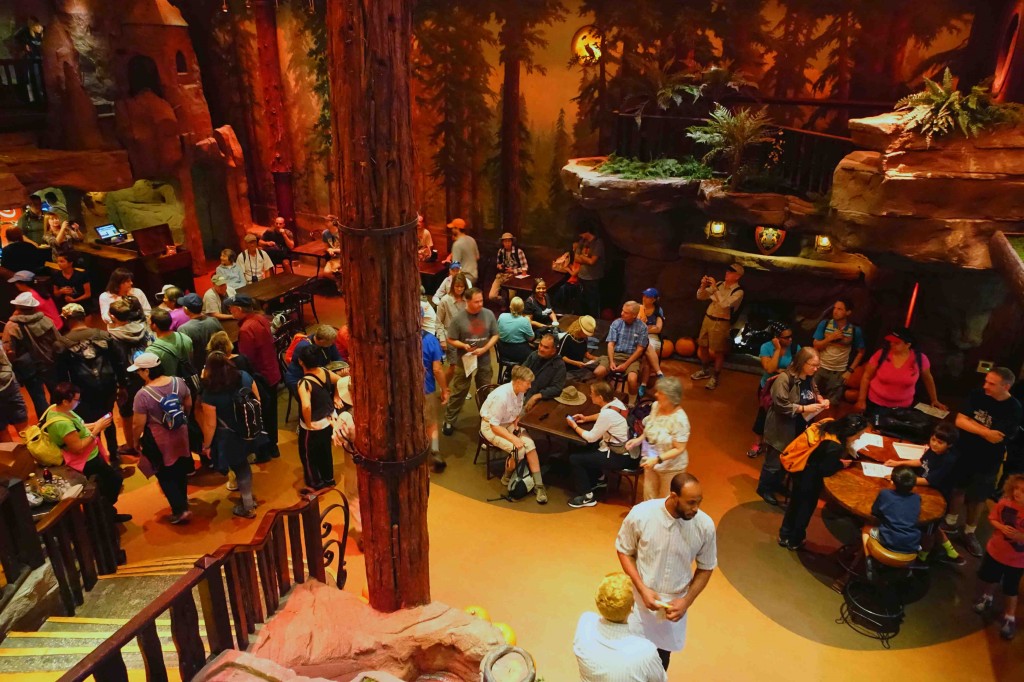 I walked around and checked it out, then I headed to the service line for some protein and coffee. I won’t lie – Clifton’s ain’t cheap. And it’s a cafeteria, for cry-eye. But the greatest disappointment was the lack of anything resembling an actual dairy product for one’s coffee. That’s a travesty in my book. But I’m a goer, so I made do. By the time I’d finished breakfast, the emails and texts started coming in. Most of my buddies were on their way and would indeed be walking the route. That made me happy and I chugged my fake-creamed-coffee. 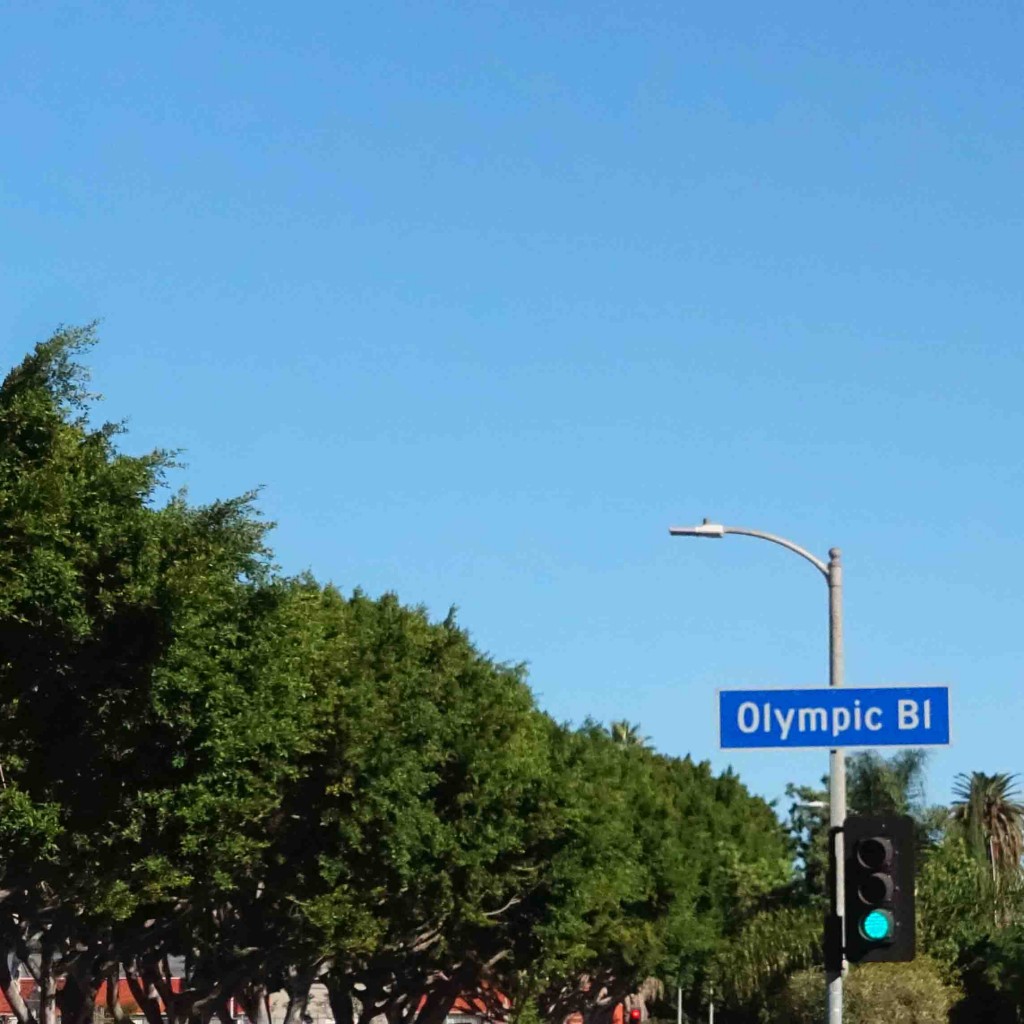 As this is the 10th anniversary of GLAW, the organizers chose Olympic Boulevard as the route. Turns out, Olympic used to be known as 10th Avenue, but its name was changed in honor of the 1932 Summer Olympics Games that were held in Los Angeles. I never knew that, so already this walk had taught me something. 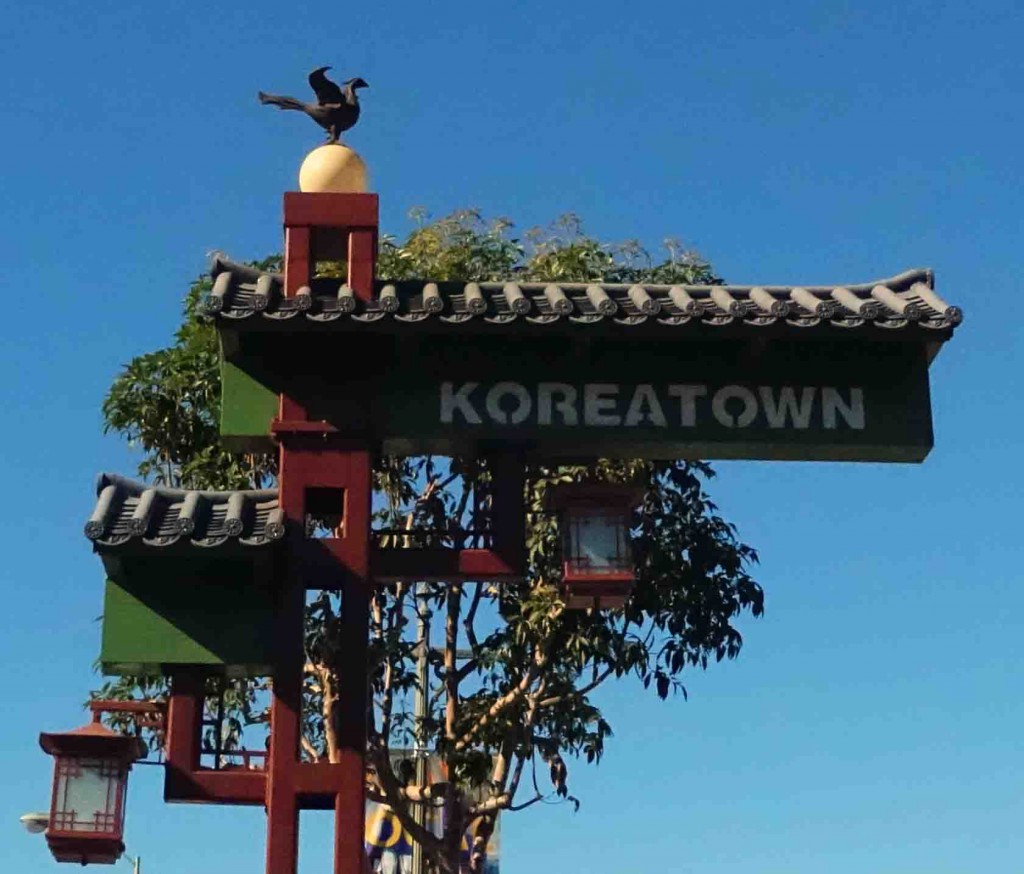 I began the route with my friend Aniela and her buddy Josh. We weren’t racing about or anything, as the walk is supposed to be leisurely. It’s a chance to get to know our city, up close and personal. So we walked and talked and looked around. We also stopped for coffee. I mean really. That first cup of the day didn’t count, what with fake cream and all. Besides – this one came with Love.

As we continued to walk along Olympic Boulevard, Josh pointed out the Hollywood sign in the distance.

The GLAW organizers had made it known to a few restaurants that some of us would be stopping in for lunch. But I had my own visions of meal time: Top Round Roast Beef. 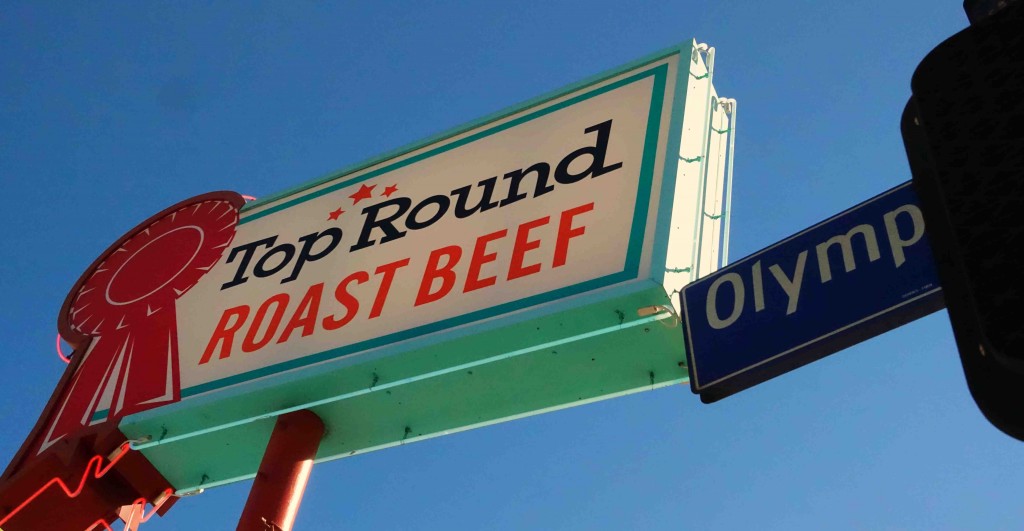 I’ve written about this joint before and it’s super awesome. Neither Aniela nor Josh had been, so it was a great new stop for them. 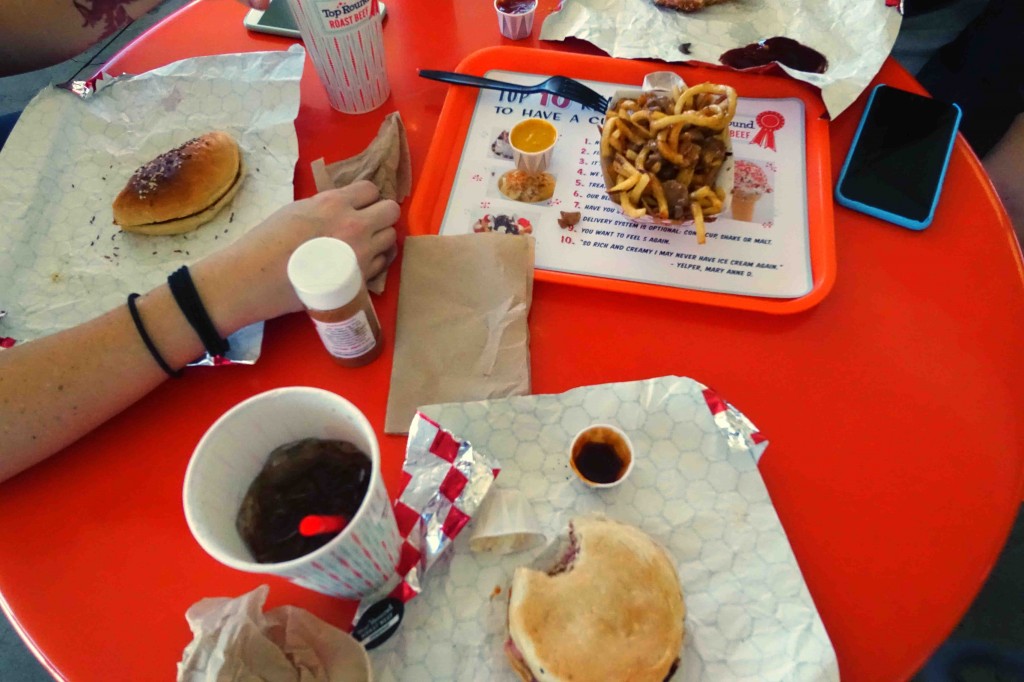 For some reason, I had to make myself eat lunch. I thought I should have been hungry, what with walking and all, but I wasn’t. So I ate my delicious roast beef sandwich out of duty. By the time we’d finished lunch, other friends had caught up and decided to nosh there, too. I wanted to wait for them to finish, so that we could all walk together, but my body was ready to go. And I feared that if I sat for too long, I wouldn’t want to get moving again. So I told my friends I’d see them down the line, then Aniela, Josh and I started walking. 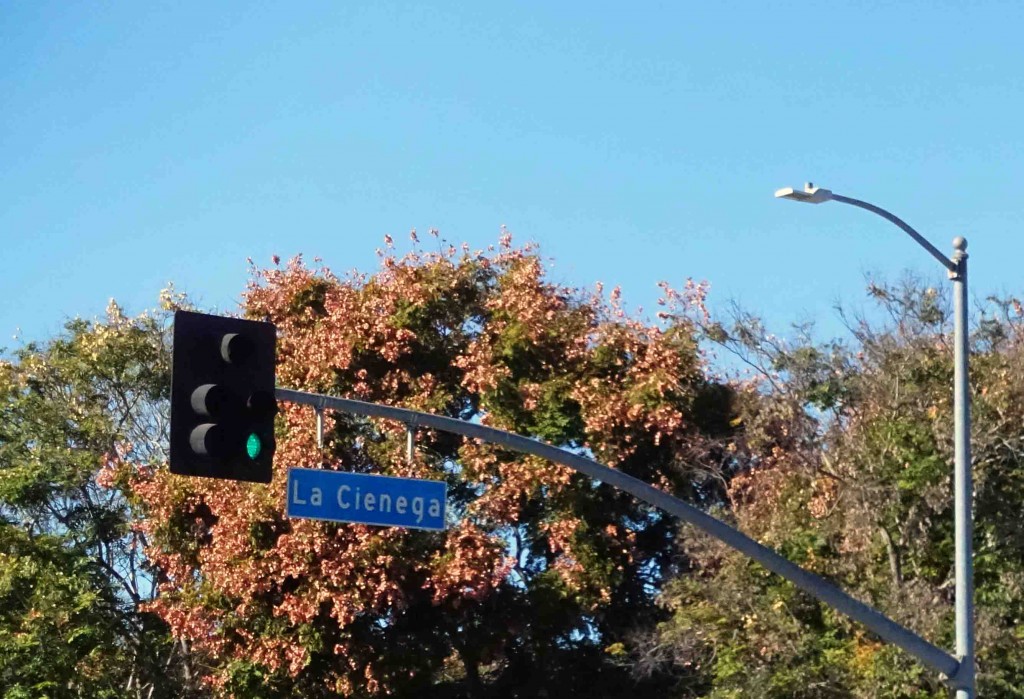 We didn’t stop again until we were in Beverly Hills. That’s when I decided an iced tea was in order. Did I mention it was hot here on Saturday? Well it was. High 80s. So iced tea was definitely called for. We got our refresher on, then kept walking west.

As it turned out, Olympic Boulevard wasn’t as interesting as I’d imagined. Sure – we saw some cool stuff along the way, but not nearly as much as I’d hoped. 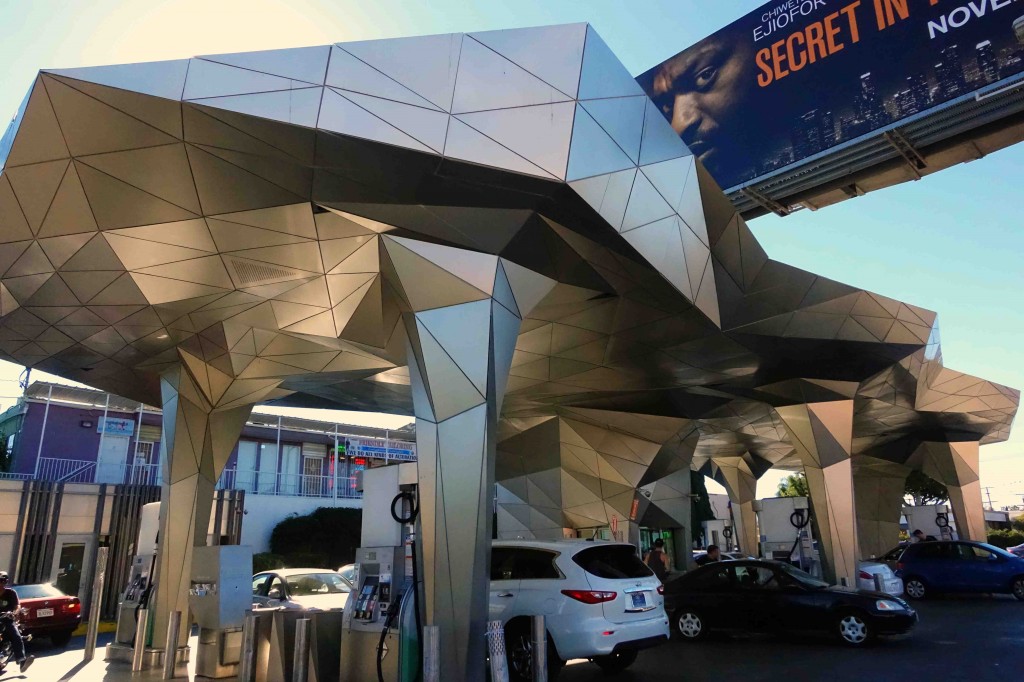 That didn’t ruin the walk or anything, it just meant there was less to see. Oh well. We get what we get. 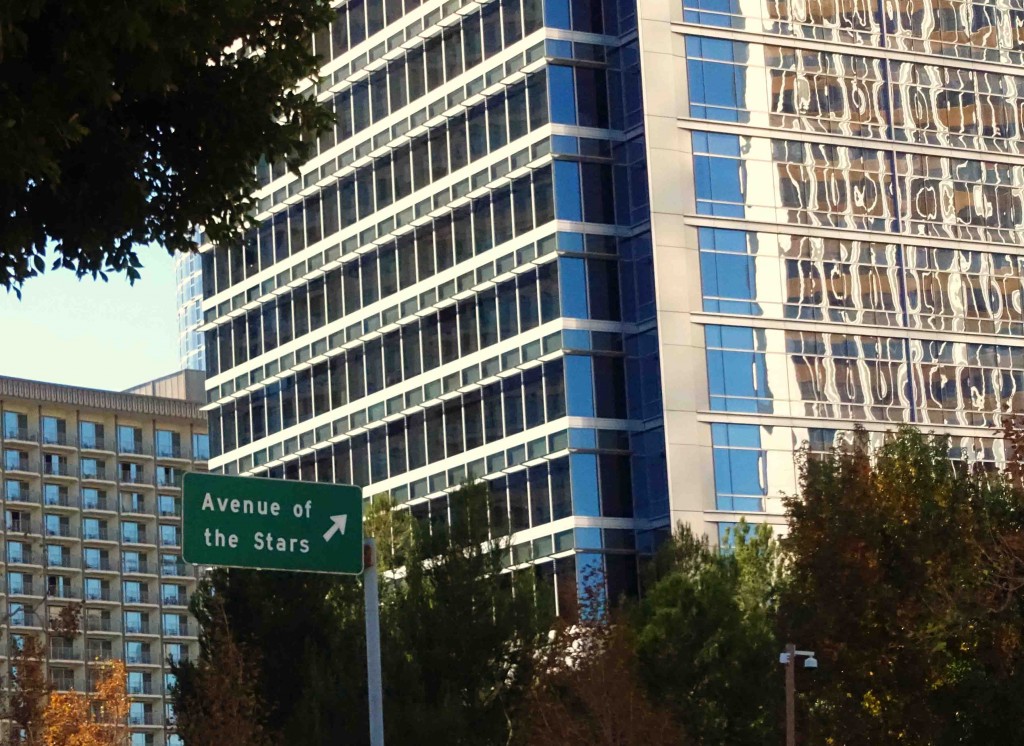 Along the way, I found myself getting excited when we’d reach a known street. Honestly – I was downright giddy! Once the 405 was in the rearview, I couldn’t stop smiling. It was then, at mile 12, that Josh decided he’d had enough. He and Aniela made arrangements for a ride and I bid them farewell. 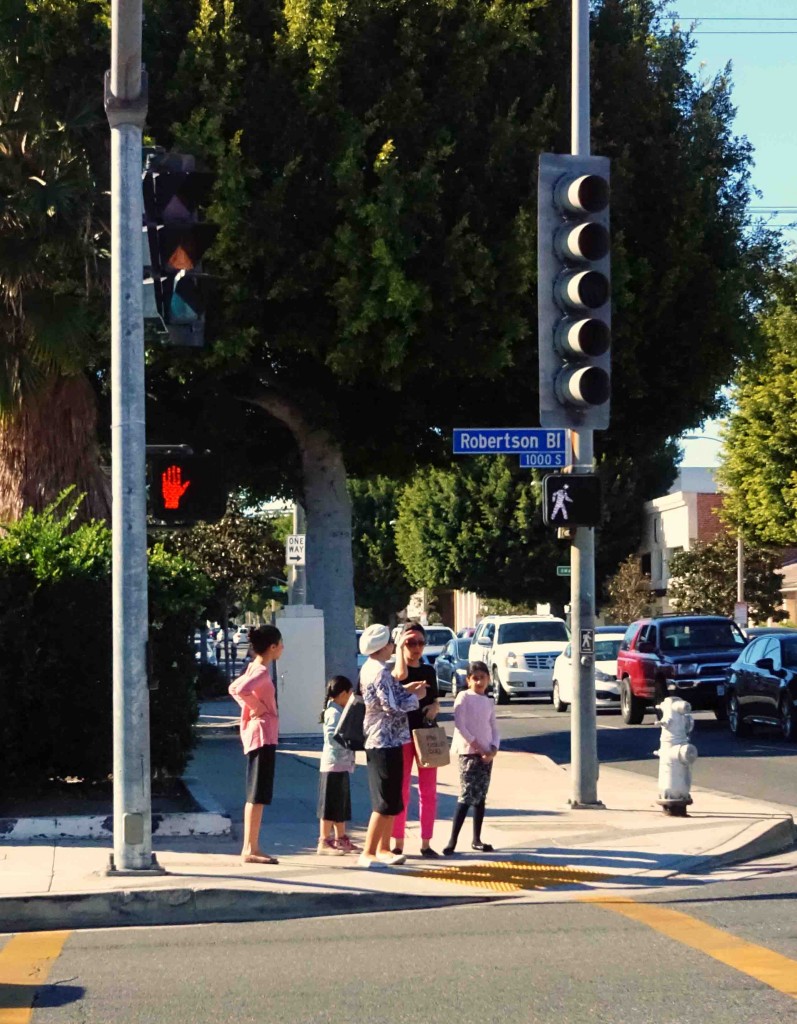 Let me be clear about something here. The idea behind this walk is fun. Not competition. Not completion. If a person isn’t feeling it, she should stop. And as we are all grown-ass people, responsible for our own well-being, it is up to us to monitor when we’ve had enough. With these thoughts in mind, I encouraged my walking buddies to care for themselves and to choose wisely. Heck – they’d gone 12 miles! I’d say that was pretty cool. 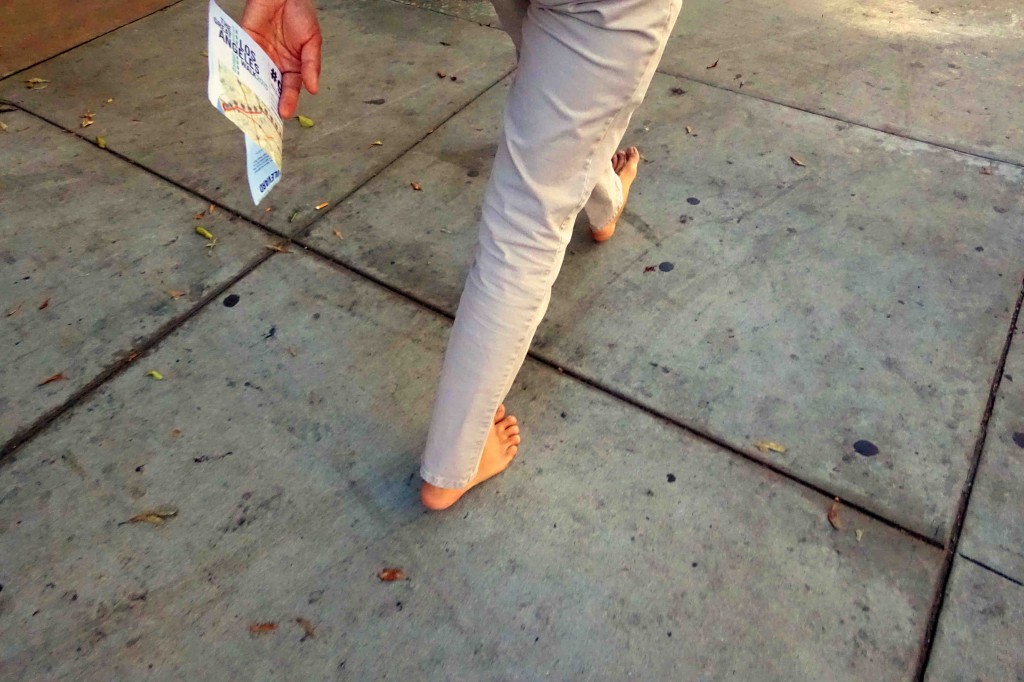 After Aniela and Josh rode away, I considered waiting for my friends who were just over a mile behind. And I really wanted to. But I could feel my legs thinking that if I stopped walking, they could tense up and not go any farther. So I got back on Olympic and started hustling toward the coast. 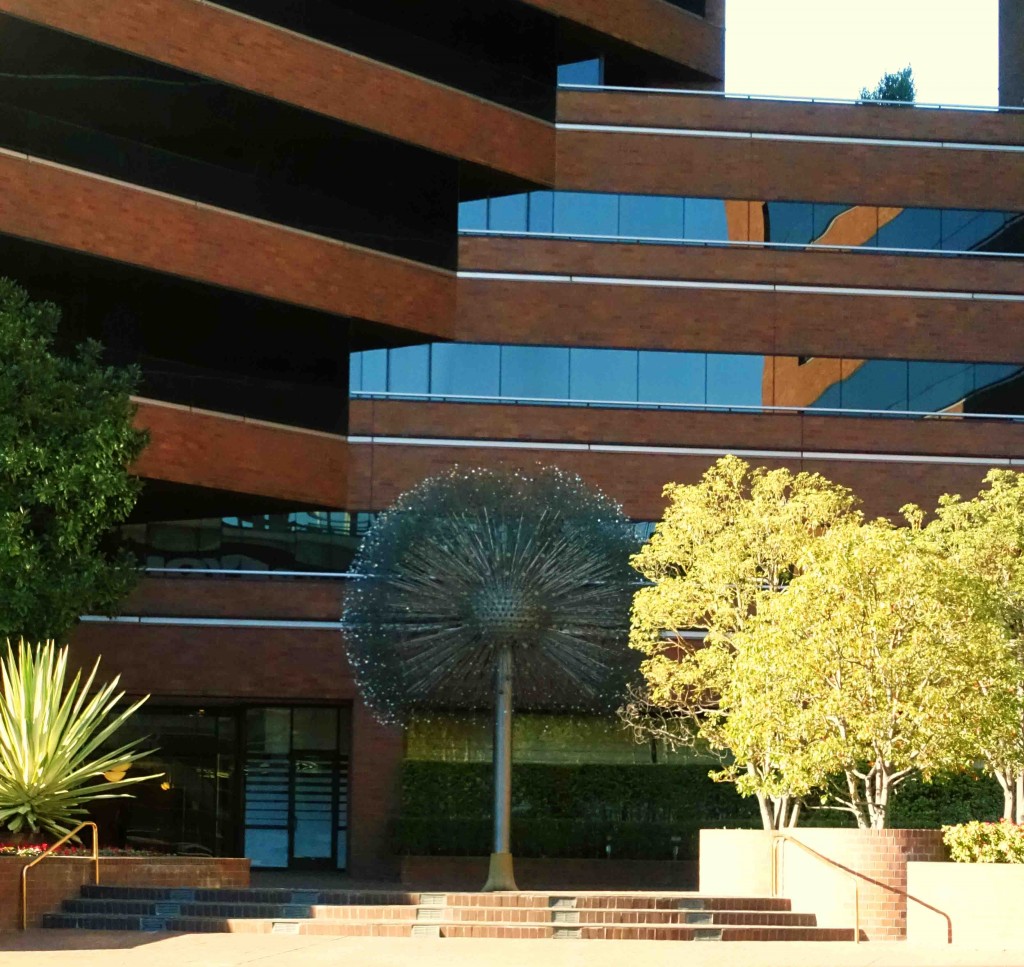 The last 4 miles were rather quiet. The walk was lovely, but again, not particularly interesting. I did spend a couple of miles walking with a woman and her grown son, and they were cool. But the son was having a little trouble keeping up, so I eventually took my leave and booked on. 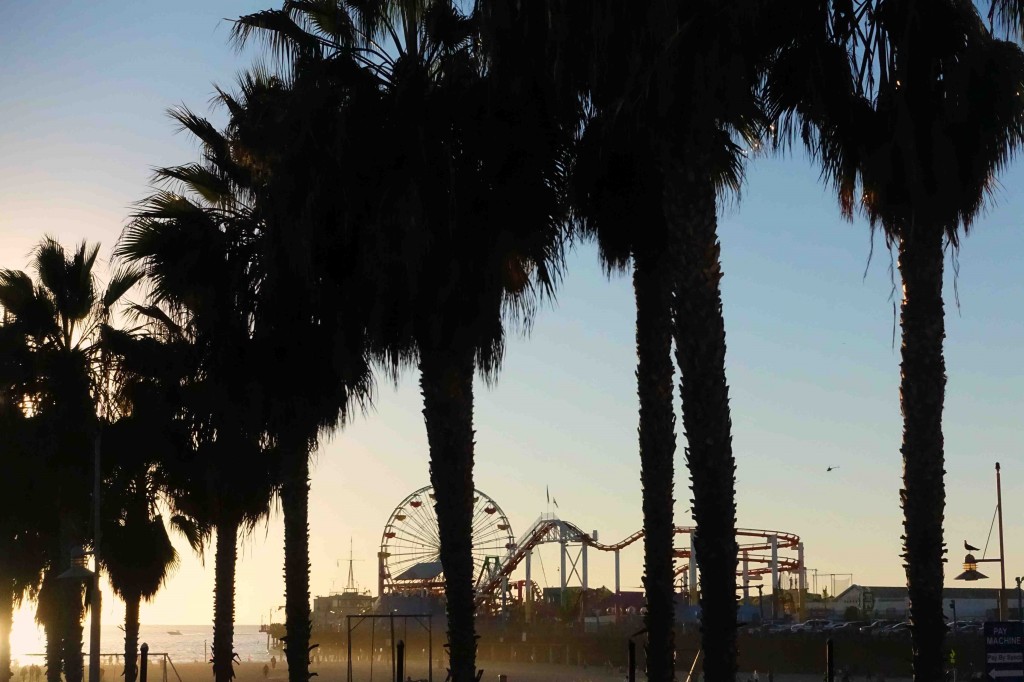 By the time I was in Santa Monica, the giddy was out of control. I met up with other GLAW walkers at the designated finish and we took in the ocean view. After a short wait, the organizers arrived and took group photos. Then I headed to a local restaurant to meet up with my friends and Mister, who had driven down to give us all a lift home. 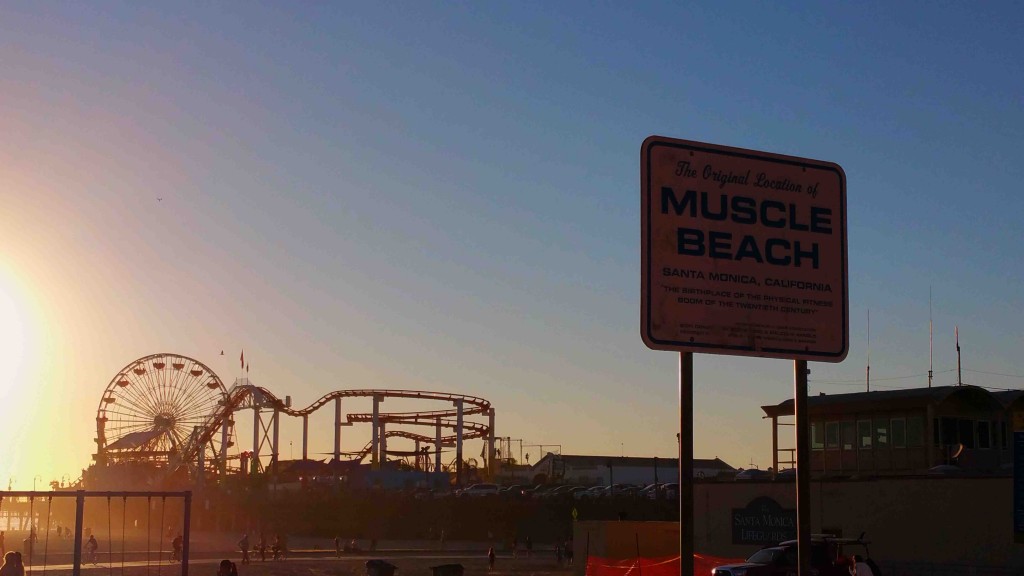 Much the same as at lunch, I struggled to eat dinner. I just wasn’t hungry. But I did mack on a beer and then there were some amazing house-made potato chips. I guess my body knew it wanted salt. And beer. What can I say? I yam what I yam.

Once home, I hobbled in and took a shower. I put on some jampers and kicked back with another beer. When taking an assessment, I realized I had a single blister on my left foot, but that was about it. I had fared pretty danged well and I had done it.

I’m so glad I didn’t have a fever and was able to participate this year. I’m glad I packed my CamelBak full of water, so that I could hydrate all day long without stopping to buy water. I’m glad I put some granola bars in my pack. Though I didn’t eat any, I was able to give one to a homeless gentleman and another to the kid I walked with near the end. (I say “kid” even though he was 26.) I’m glad I sort of trained for the walk. I had intended to do one 8 to 10-mile walk each week, as well as several shorter walks in preparation for GLAW. I think the longest walk I accomplished was 7 miles, and all the rest were much shorter. But my body was ready and not at all surprised. That really helped. 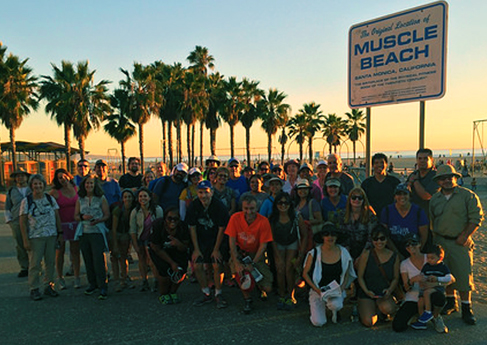 And finally – I’m glad I’m a goer. It’s fun! And I think some part of me really needed to know I could complete this walk. As I watched seemingly healthy people dropping out all around me, I felt pretty bad-ass. I felt strong. I felt capable. I felt that I’m a pretty grand version of myself.