Mikki BriskAugust 10, 2017Home LifeLeave a Comment on So. Lizards. 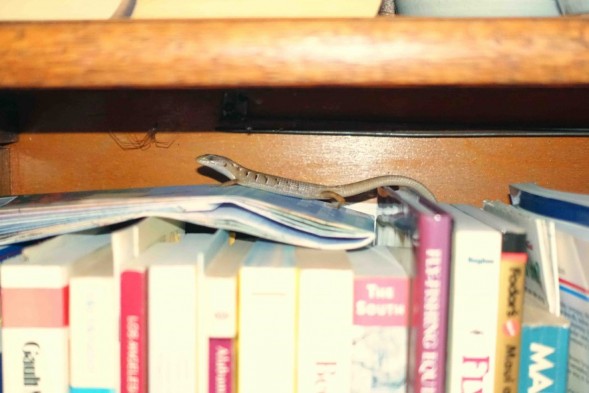 The lizards are at it again. (Rats and squirrels are at it, too, but I don’t care to discuss those little fuckers right now.) So. Lizards.

Since moving to the new pad, it has been lizards – not the vernal equinox – that have indicated the arrival of spring. I know this, because when lizards show up in the house, spring has sprung. And this year the damned lizards were doubly determined to make sure I got the memo.

It started in the morning. I walked into the kitchen and saw a very long piece of something on the floor by a cabinet. I word it this way because I wasn’t wearing glasses and for all I knew, I could have dropped a blackened banana peel on the floor. Of course, I hadn’t done any such thing, but hey – it was possible. So I left the room, donned my specs and returned to the kitchen. Nope – not a banana peel. I was looking at a lizard, about 8 inches in length. I didn’t just meet these lizards, so I got a big bowl and did my best to catch the little dude.

An hour or two later, I spotted a second lizard. This one was creeping into the kitchen, along the same path as the first. I went for the bowl, but was too slow. That little asshole climbed into a book case and cocked his head at me, as if to suggest there was no way I was ever going to get him. I swear – at one point he actually lunged for me. Lunged, I say! As I was in no mood to play games with some lizard I barely knew, I told him he had pissed me off and that he’d blown it. I went for the vacuum cleaner.

Two lizards in one day was too much. I started looking around, trying to determine their entry point. There was a gap beneath the doors in the sitting room, but it was so friggin’ small! Still, I figured the little assholes were coming in some place nearby, so I went to my supply box, grabbed some weather seal and stuck it on the bottoms of the doors and that was that. It must have worked, as I’ve not found another lizard in the house. Either that, or they’re getting better about sneaking around. And if that’s the case, could they please eat a few of the damned spiders? Come on, lizards. Work with me here!

That was a weird 2-lizard day. It was also the first time I’ve been able to catch a lizard without injuring it or cutting off part of its tail. At least that’s how it went down for one of the lizards. For the other, it just went down. All the way. He really shouldn’t have pissed me off. And he sure as hell shouldn’t have lunged.