Mikki BriskApril 26, 2016Creativity Home Life Los AngelesLeave a Comment on It. Is. Done.

So I’ve been working on a fireplace wall for, well, what feels like forever. And I am happy to report that as of last week, it is done. 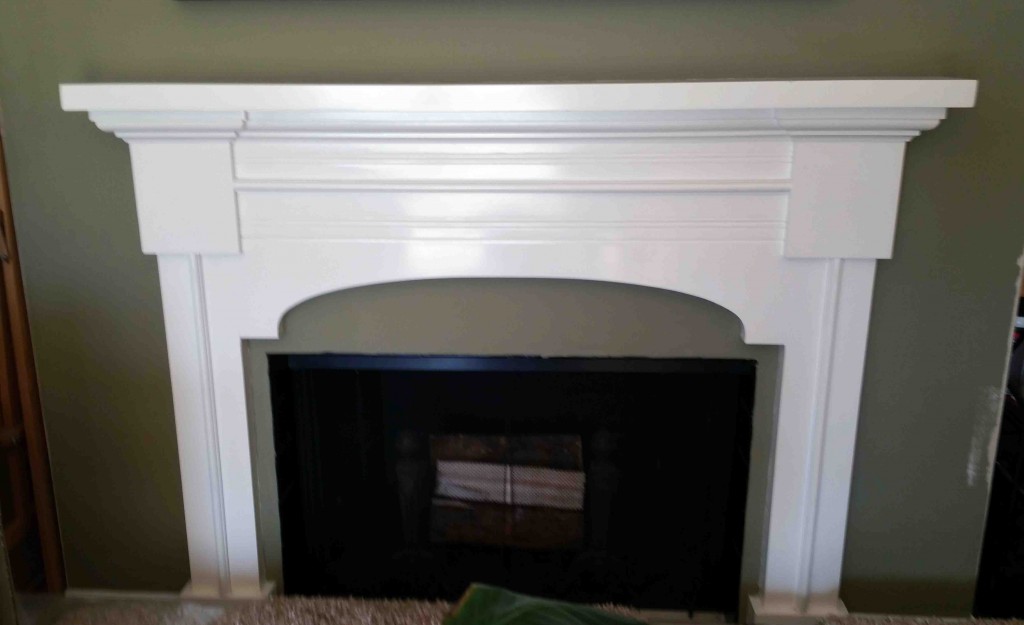 Let me remind you of where I started. There was a too-small mantel on the wall and it had to be removed. For anyone thinking, Mikki! I like that mantel! What’s your beef? I’ll tell ya. According to L.A. County Building Codes, that mantel (made of wood) was too close to the fireplace opening, meaning it wasn’t up to code. And while that doesn’t mean much most of the time, if I ever have to get the heck out of dodge and this joint gets inspected (which is how we do in Cali), that mantel would be a problem. Let’s face it – if I’m about to be on the run, I will likely have one-too-many problems already. Wouldn’t need another. Anyhoo – the mantel had to go. 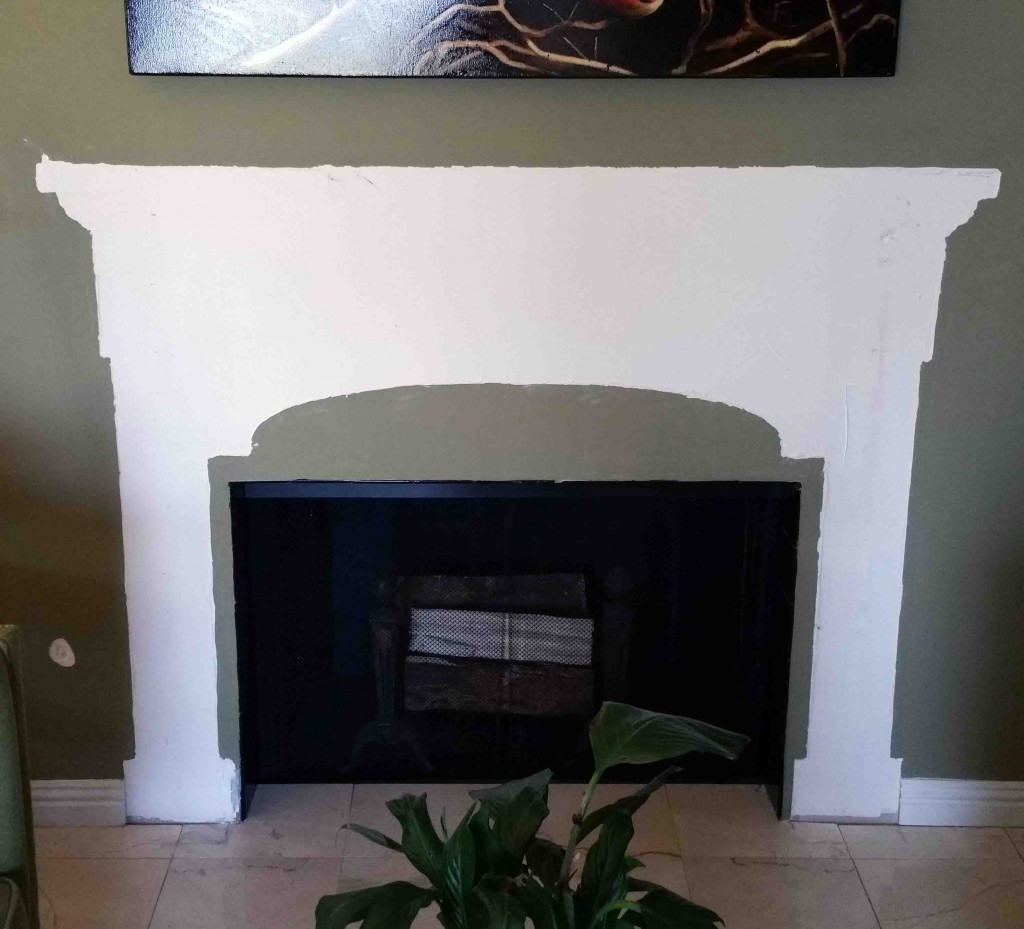 Once I removed said mantel, the wall behind it was pretty banged up. My initial plan had been to simply smooth out the rough spots and have a clean, unadorned wall. But the rough spots weren’t cooperating. In fact, they were downright stubborn. So I gave up on the smooth wall idea and shifted my thoughts toward something in the Venetian Plaster arena. That, my friends, was easier said than done, as I had only ever heard the words “Venetian Plaster,” and certainly hadn’t tried my hand at it. Cut to me, watching vid-jas on the YouTuber and then I got started. The texture part of the process wasn’t too bad. In fact, it went pretty well and I was quite pleased with the results. But the painting part? Not so much. 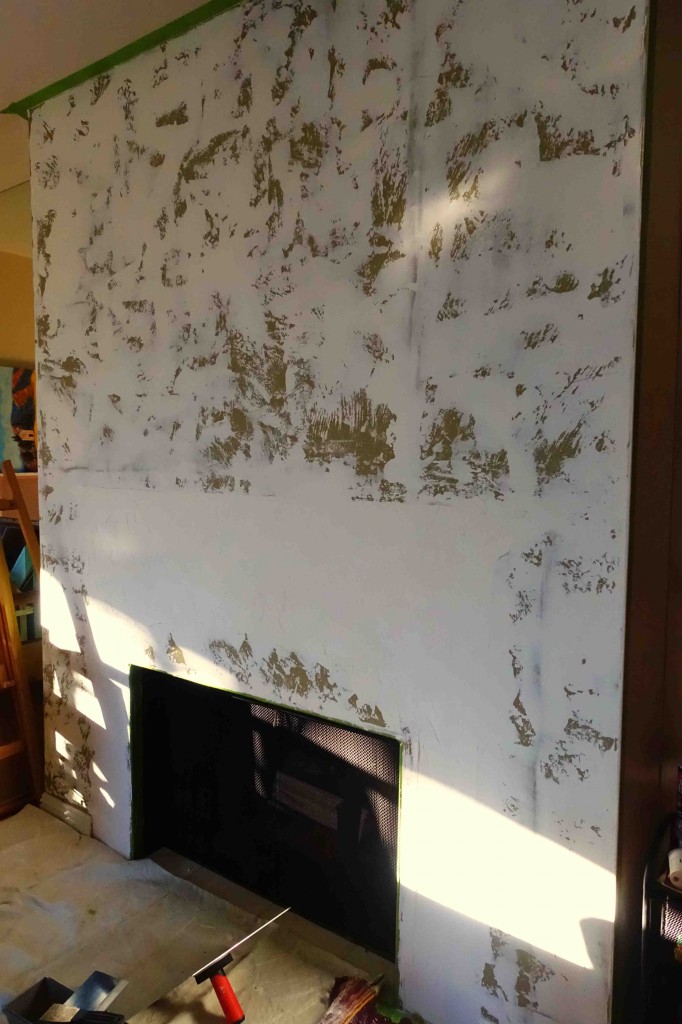 I was so challenged by painting that danged wall that I was nearly brought to tears.

The base coat was easy, I admit. I simply used the same color as the rest of the room. But it wasn’t enough. I knew I needed some accents to “age” the wall and get it to where my brain hole wanted it to be. So I got after it, and failed. I tried a different approach. And failed. I went through my trying and failing process a few more times. When I was just about to give up completely and accidentally burn the whole danged house down, I leaned against a counter and bowed my head. Then, in a high-pitched, Mary Tyler Moore “Oh, Rob” kind of voice, I said aloud, “I have not failed. I have simply found 5 ways that do not work.” And I started a fresh approach. 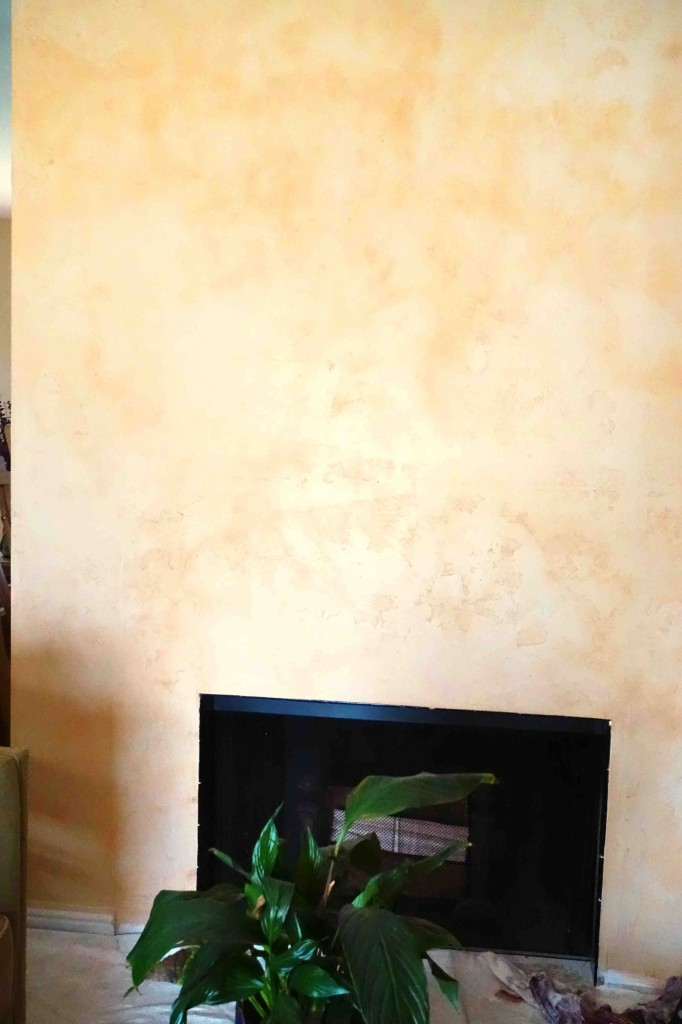 That’s when something amazing happened. It worked! I was getting the desired aged effect, without being overly wack-a-doo. (Don’t get me wrong. Sometimes wack-a-doo is exactly what I’m looking for. Just not this time.) So I finished the wall and moved on to the final details. 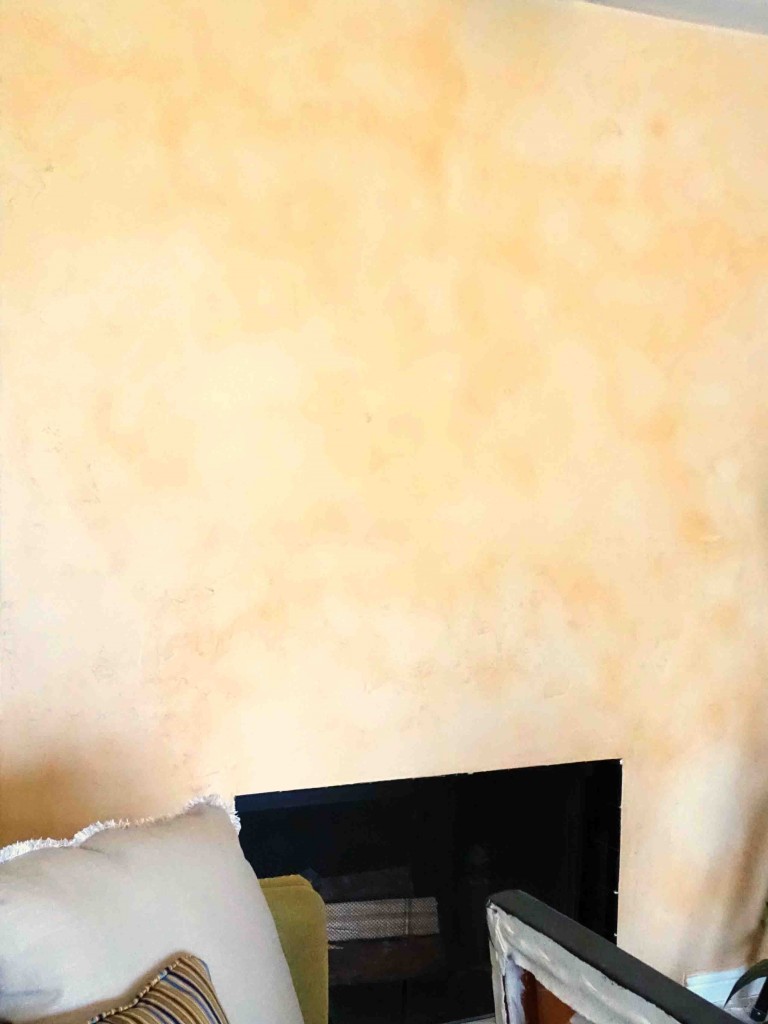 If the too-small wood mantel was a code problem, imagine what a failure wooden base boards would have been had they abutted the fireplace opening. This was another time I wanted something simple. No flourish, no scroll work. Plain, straight lines were what I was after. I went to a few of the big hardware chains to check out their tile and stone selection. It didn’t take long to understand that if I got something there, I would be limited to subway  or bathroom tile. And I wanted neither. So I put on my thinking hat and decided to go to an actual stone and tile store. There I found plain marble that was almost perfect. I say almost because I needed 20-inch lengths, but the best they could do was 18 inches. Okay. I thought about it for a second and decided I could live with cuts versus a solid piece. It would only be 2 inches on each outside end, and no – it wouldn’t be perfect. But friends – sometimes good enough is good enough. They couldn’t cut the pieces for me, so I took my tile back to a big chain store and had the job done. I then went home, applied the pieces and let them set. Once that had cured, I grouted the edges and the “baseboards” were finished. (At that point, I did have to miter some new wood around the tile hearth, as the old wood was cracked. The hardest part of that process was matching the stain to the existing wood floor. And the mitering itself. And securing it and filling the gaps and blah, blah, blah.)

The last step – for reals – was the baseboards on the sides of the fireplace, which would abut the front stone pieces. I needed them to be a height comparable to the stone, and simple as well. Again – I tried the big chain stores, all to no avail. That’s when I remembered the little neighborhood hardware store I often use. Not only did those guys have what I needed, they also ripped the board down to the right height and sold me only what I needed. That’s important, as it’s no fun to drive around in my old Volvo with a 12-food board hanging out the wing windows. But I digress. I got home with the wood, painted it, jigged out a notch for the gas starter key on one side, cut a straight piece for the other side and put the pieces in place. After that I caulked the edges and let that dry overnight. Then I touched up the paint and the job was finished. Truly. It only took forever and a day.

Had I hired a professional, this project would have been completed in a day or two, max. And I probably could have gotten the smooth wall I originally envisioned. But I would have been out beaucoup dollars, folks. And that wasn’t an option. As it happened, I already had a lot of the tools and supplies needed to make this wall a reality. So what was my final tally? Right at $118.00. (The wood strips for the floor surround ate most of that, as they came in at just over $60.00.) All in all, I’d say that’s pretty reasonable, especially since hiring a Venetian Plaster artist can cost an arm and a leg. 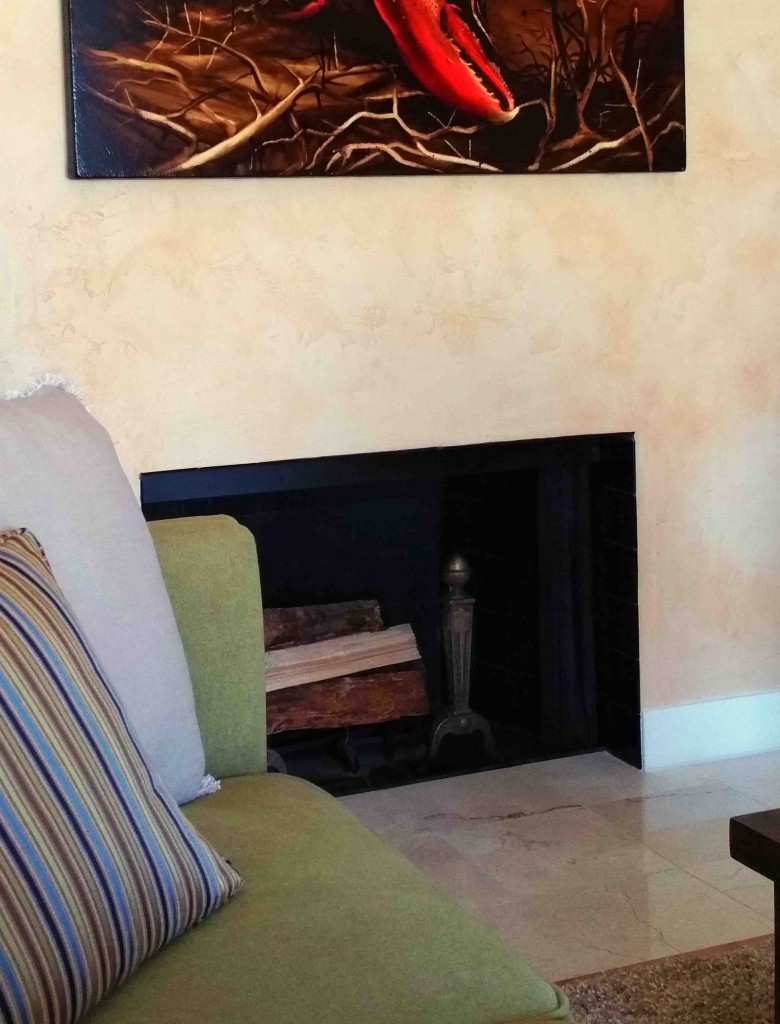 My takeaway from this experience is this: I can handle some jobs myself, as long as I don’t have a strict time schedule as a guide. I think the new area is not only adequate, but also pretty. One of my friends came into this room and said, “Wow! This is a grown-up’s house!” And I suppose it is. Which is funny, since 2 dorky kids live here. But that’s okay. Every now and then we pretend to be grown-up. And now we have a lovely place to sit while doing so. And by the way, if you want the look of Venetian Plaster in your home and aren’t in any hurry, let me know. I’ll only charge an arm. Or a leg. Never both.