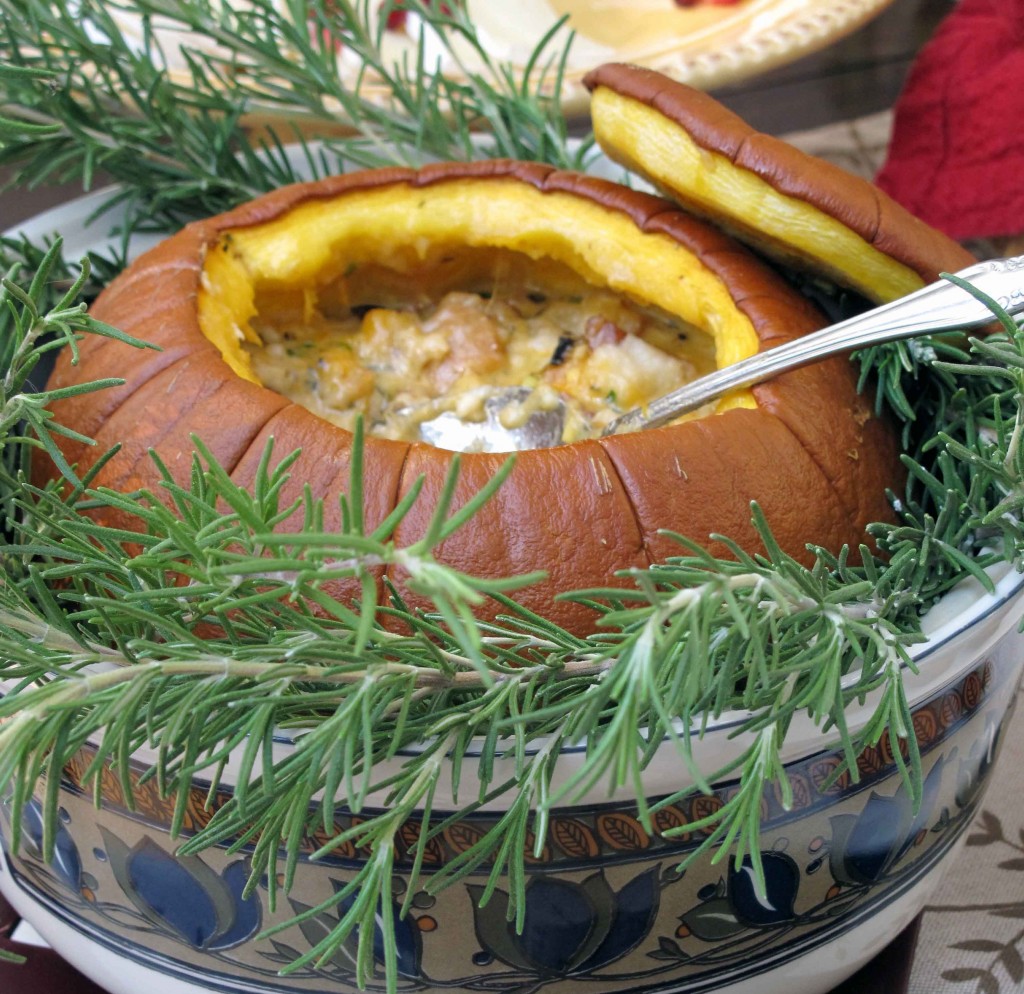 This is another of those not-my-recipes recipe. And I love it more than mere words can say. I’d like to hold it close and dance with it, all the while inhaling the beautiful aroma and eating the very flesh of my partner. Did I go too far? Sorry.

Every time I’ve made this, people have literally begged me for the recipe. And I have obliged. I usually just send them the link to Dorie Greenspan’s recipe on Epicurious.com. I do this because I’ve made a few changes. I don’t feel bad about this, as Dorie’s recipe clearly states one should feel free to try out different things with the ingredients. True to my history, I advise you to look over her recipe (via the link above). I’m pretty married to the changes I’ve made, and like I said before, this recipe is my fantasy dance partner. Since it’s always such a gi-normous hit when I make it for others, I thought I’d share it here. You’re welcome.

The recipe calls for stale bread, but I’m just not with it enough to make sure I have that around. And honestly, stale bread in our house usually equals dead bread. Not good. So I cut the bread into cubes the day before I plan to make the pumpkin. I place the cubes in a bowl and leave it right out on the counter until the next day. This dries it out pretty danged good. 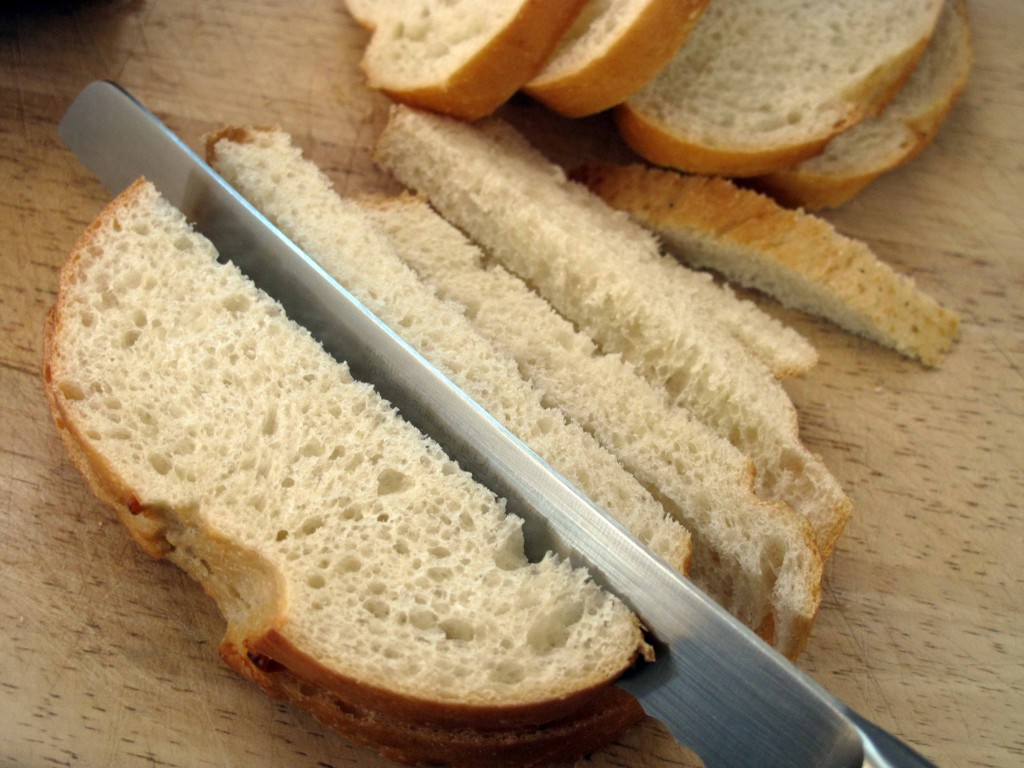 And another thing: the original recipe says to cut the bread into 1/2-inch chunks. I like the bread to absorb all the yummy goodness, and to not be too overwhelming, so I cut it in 1/4-inch chunks. And for the record, I use Sourdough Bread. But that’s just me. 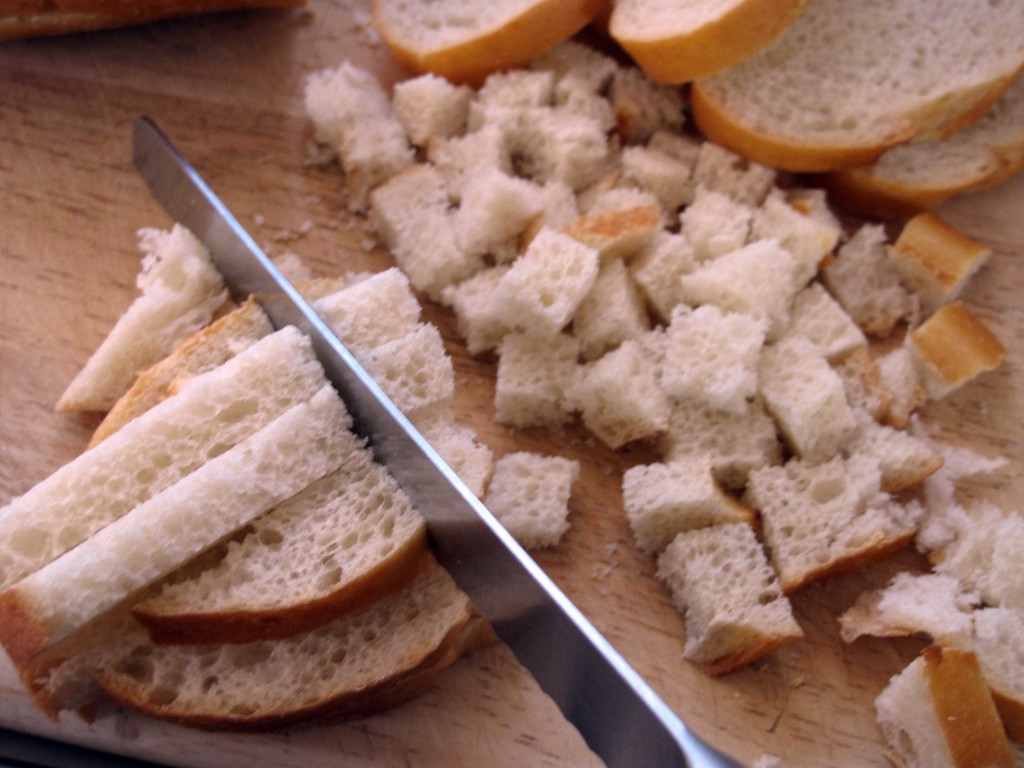 Cut the cheese into 1/4-inch chunks. For this go-round, I used a mixture of Gruyere and some sort of Cheddar. It all depends on what I happen to have on hand. On this day, I had a red something or other cheddar and it am be good, y’all. Set the cubed cheese aside. 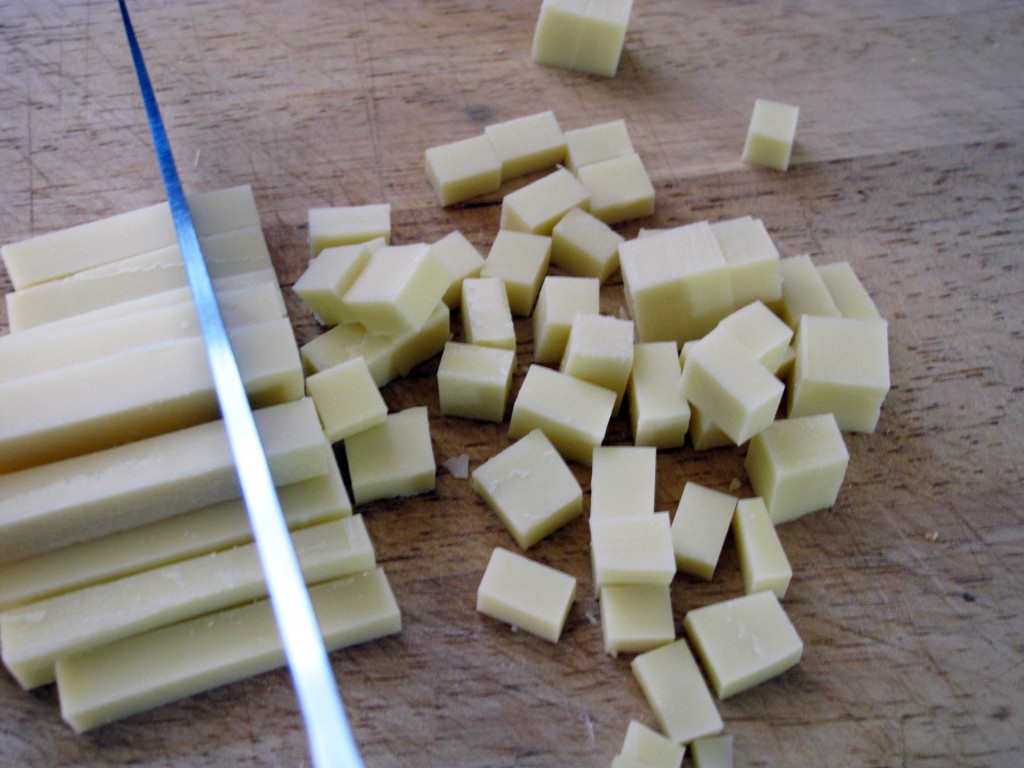 Fry the bacon. (The original recipe calls for 4 slices, but I use 5 slices.) Once cooled, crumble. Set aside. 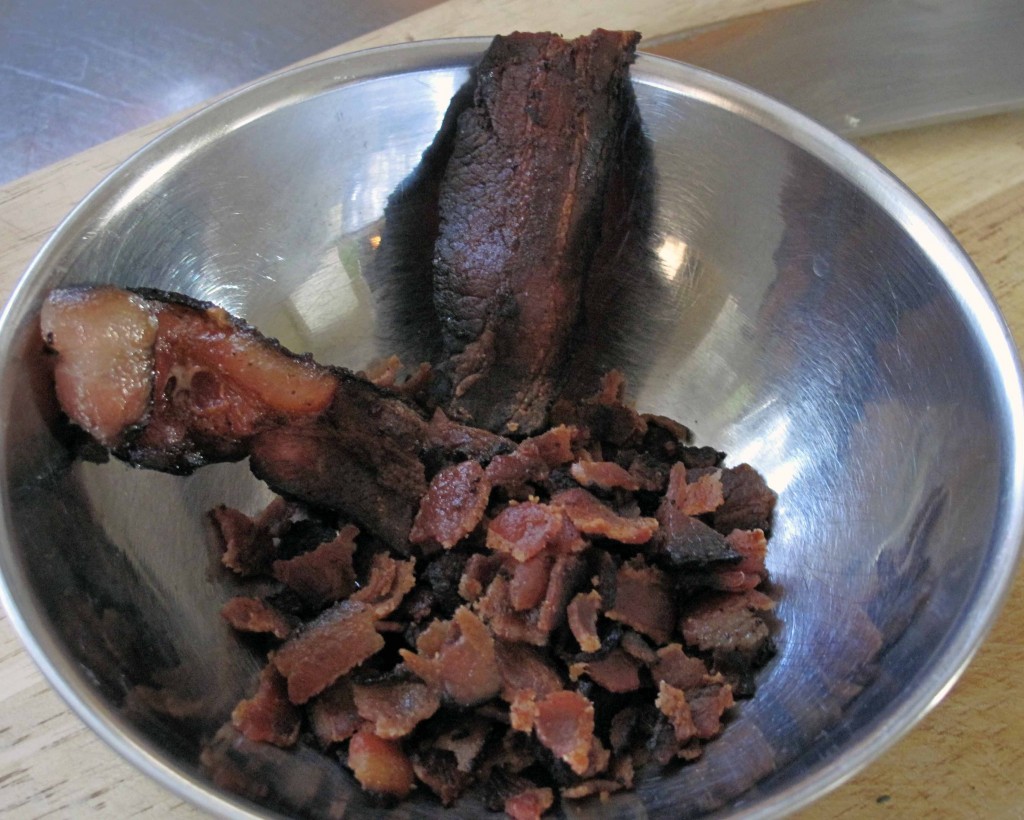 Here’s another of my changes: I use 1/4 cup of both Green Onions and Chives. It has never been too much and I love, love, love the flavor. So chop the Green Onions, using the white and light green parts only. 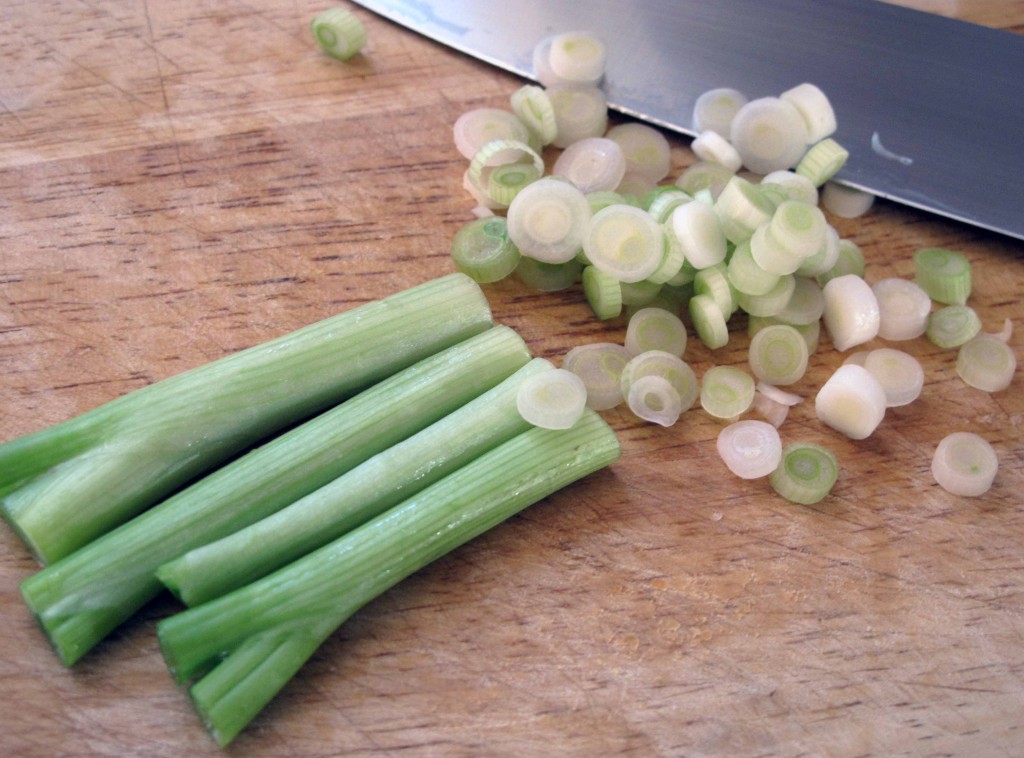 Finely chop the Chives. Add to the prepared Green Onions and set aside. 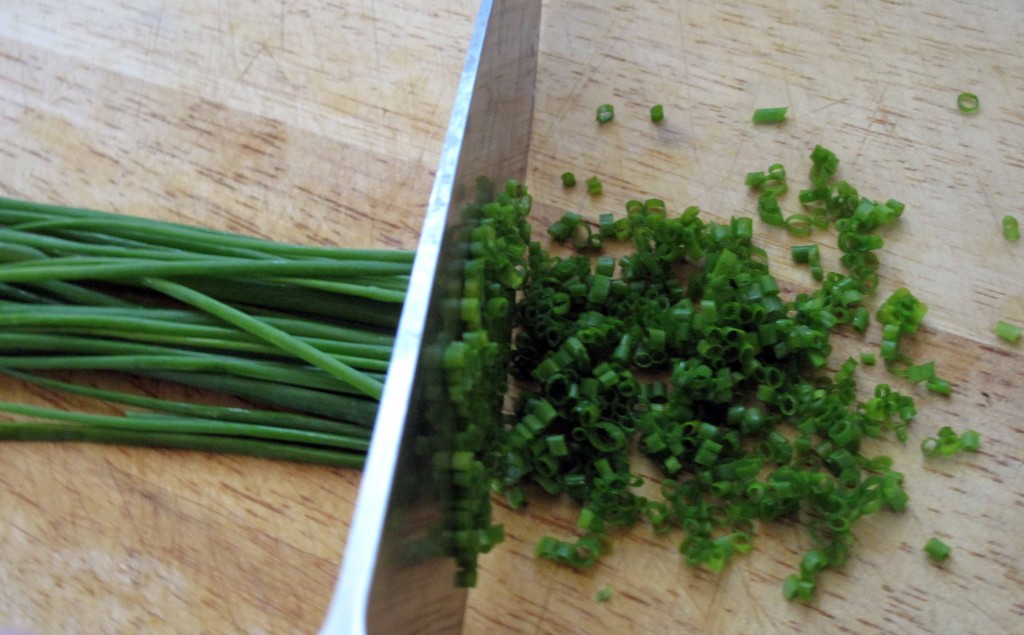 Strip the Thyme leaves from the stems. Please! Don’t just chop the danged stuff, stems and all. Nobody wants to chomp on sticks, y’all. Yes, it does take a little longer. But it’s the right way. I’m just sayin’. 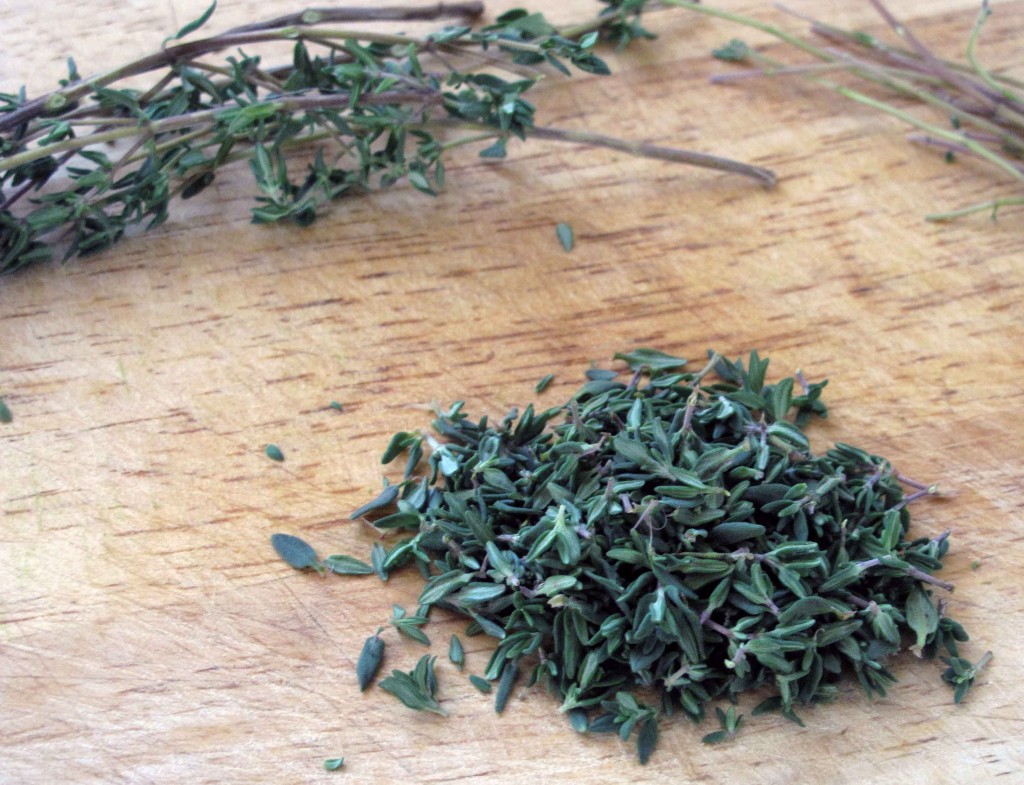 Press (or finely mince) the Garlic. On this one, the recipe calls for 2 to 4 Cloves of Garlic. I always, always, always use 4 Cloves, and it’s never been too much. Set aside. 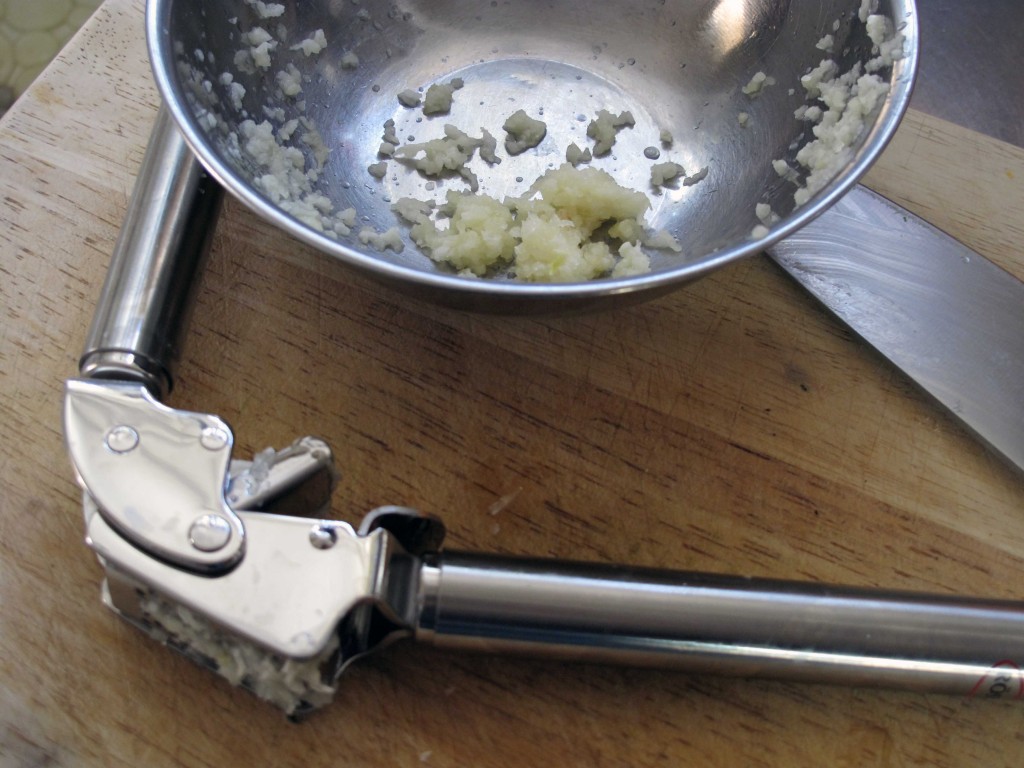 It’s now time to preheat the oven to 350 degrees F. It’s also time to clean the pumpkin. There’s no getting around it, so just dig in and get your hands dirty. 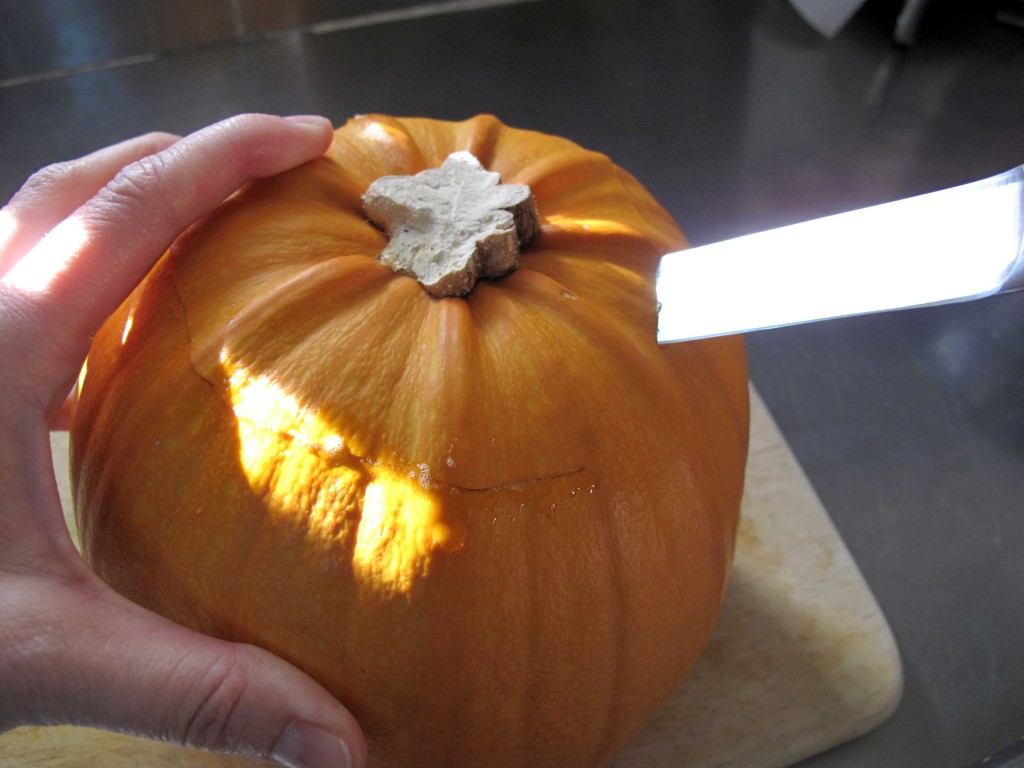 Using a sharp knife, carefully cut the top off the pumpkin. Maybe do this at an angle, so that the top fits on top without falling in. Here’s another thing I do after cutting the top off of the pumpkin: I cut 2 small triangles out of the top, along the edge. I do this for venting purposes, out of habit I suppose. If you don’t want to do this, then don’t. Trust me – it’s okay. 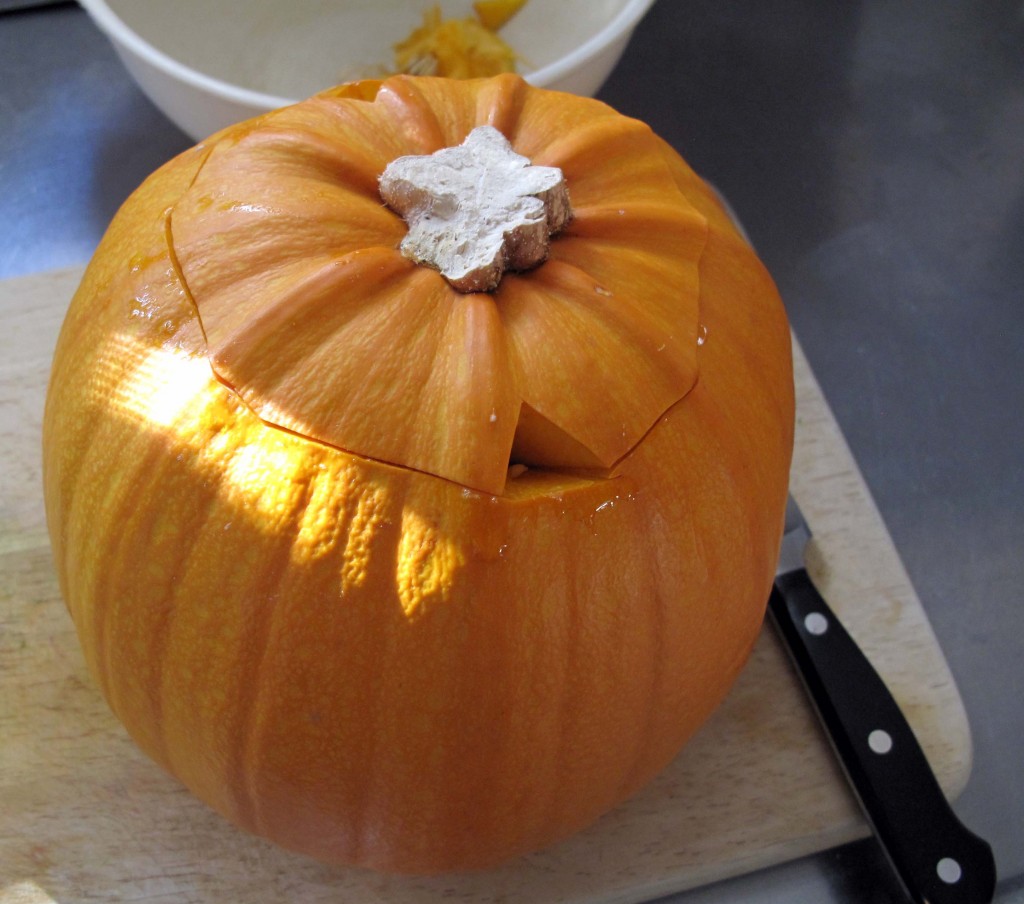 Now! Scrape out the insides of that punkin! The seeds and strings all have to come out. 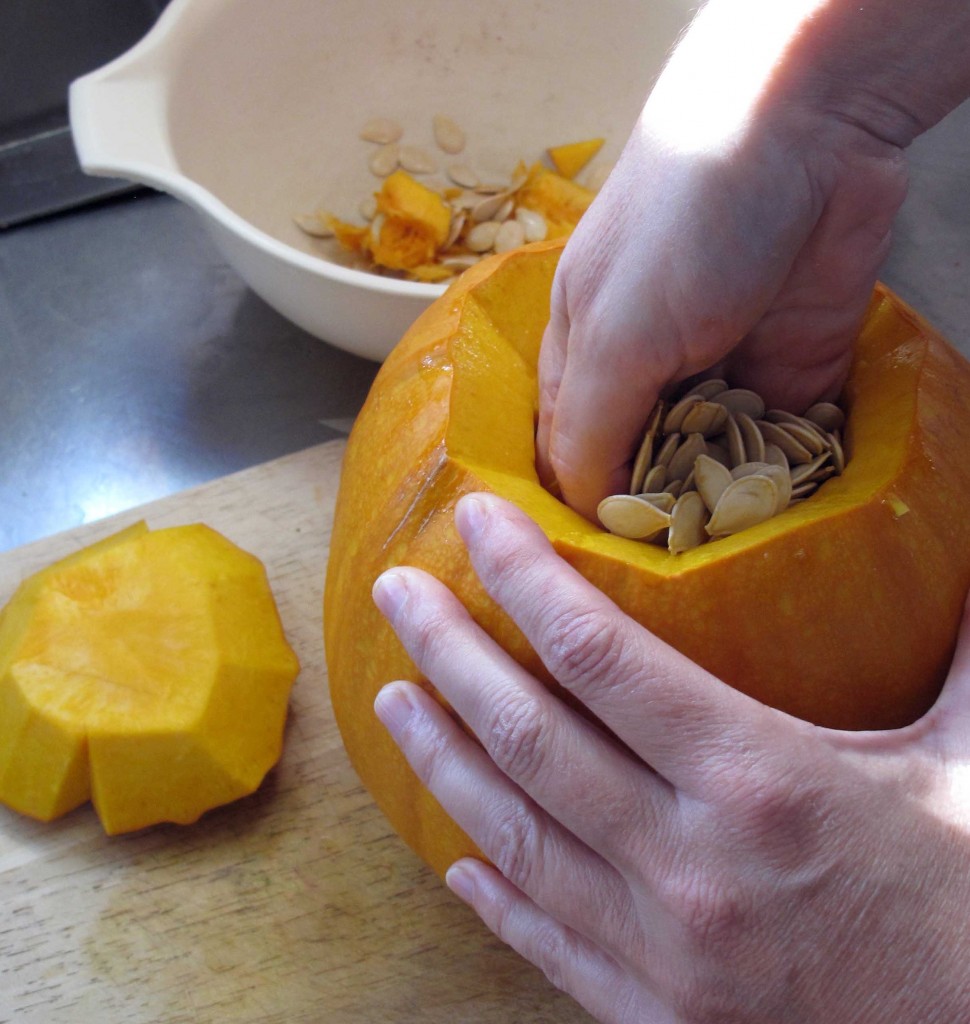 Once you’ve done as much as you can with your hands, take a large spoon and scrape until the inside of the Pumpkin is smooth. But don’t scrape too hard! You want to leave as much flesh as possible. You’re really only after the seeds and strings. (And you can clean those seeds and roast them, you know. But toss the other gunk.)

Once the Pumpkin is cleaned, sprinkle the inside with Salt and Pepper. Now you have to figure out what you’re gonna bake the danged thang in or on. Per Dorie’s recipe, this decision is important. I’m not gonna lie to you, I always bake the Pumpkin in a casserole that fits around it just right. I serve it straight out of the casserole and the presentation works for me. If you opt for the baking sheet method, just be careful and patient. 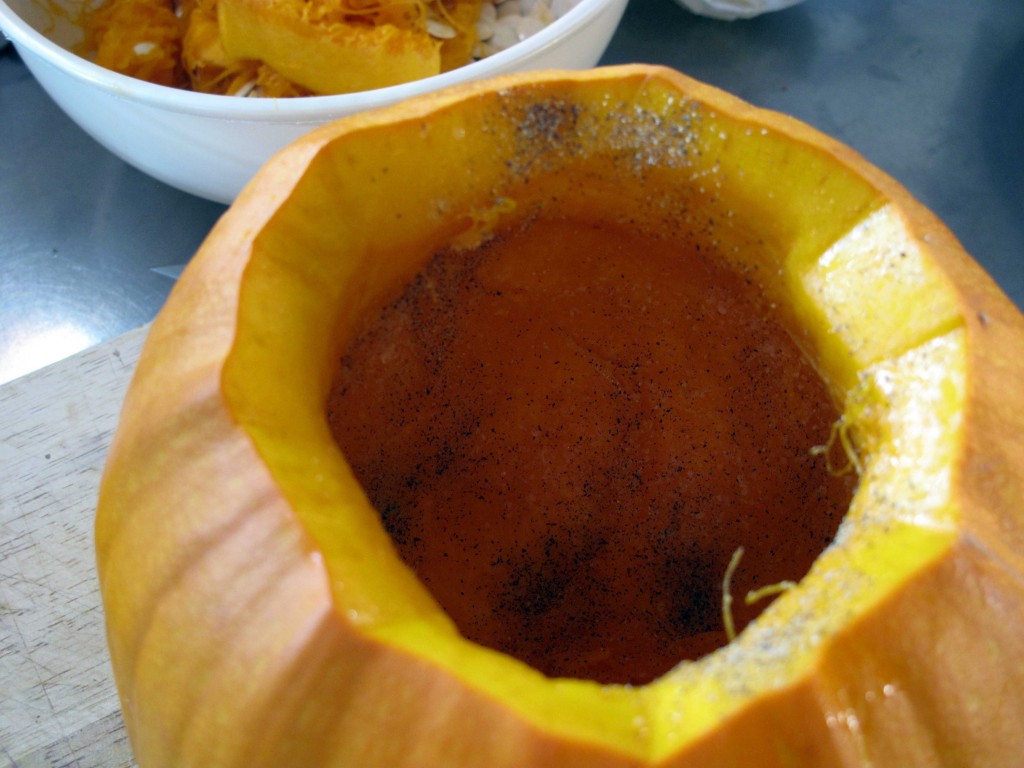 Anyhoo, at this point I place the Pumpkin inside a casserole dish. Set aside.

Take all those stuffing ingredients you’ve already prepared (Bread, Cheese, Bacon, Garlic, Green Onions, Chives and Thyme), along with some freshly ground Black Pepper and toss them in a large bowl. 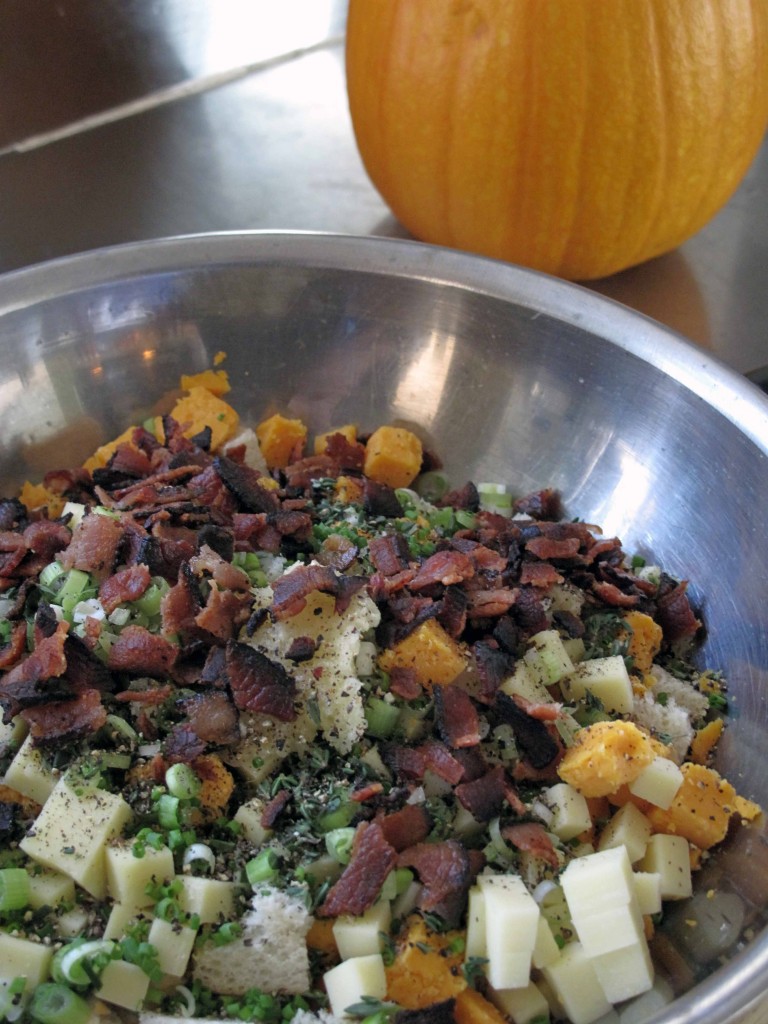 Using your hands, stuff the cleaned Pumpkin. I fill it as much as possible, though I don’t press it down so that it’s so tight it becomes a brick. That being said, I do pack that bad boy. 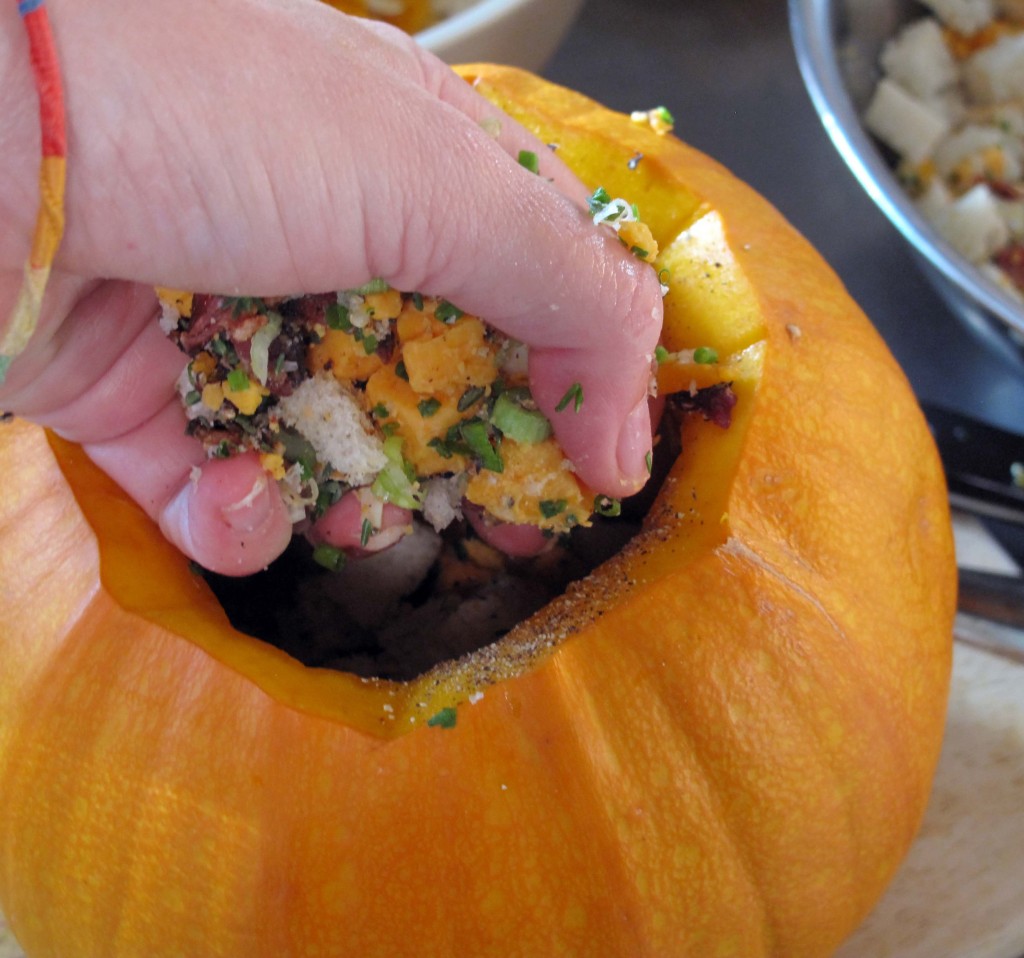 Here’s another change I’ve made: Dorie uses 1/3 cup Heavy Cream and I use a full cup. I grate some Fresh Nutmeg into the Heavy Cream, and mix it up with some Salt and Pepper. 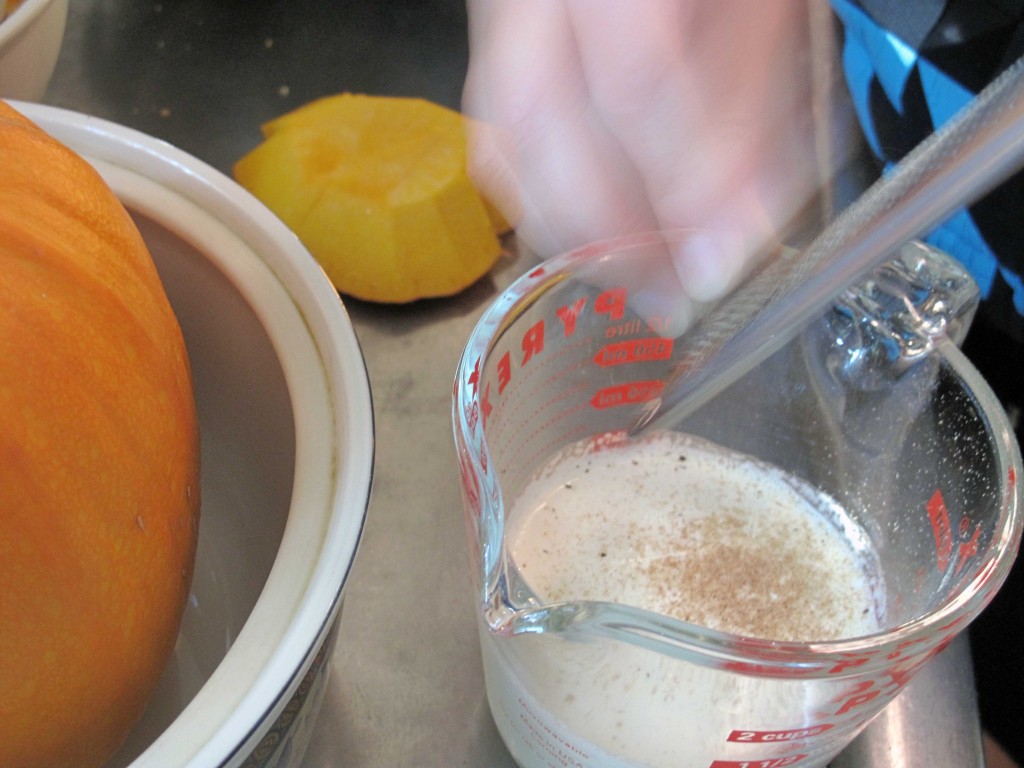 Slowly pour the Heavy Cream mixture over the stuffing inside the Pumpkin. 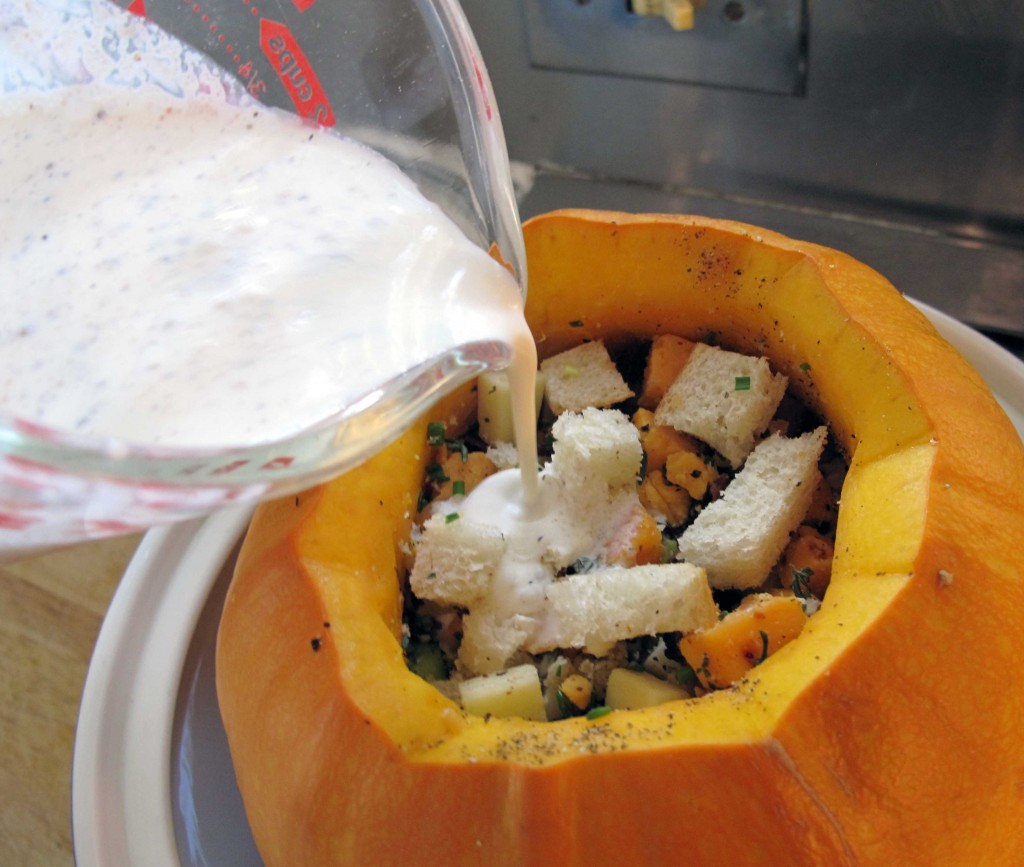 Place the lid on the stuffed Pumpkin and place the baking dish in a preheated 350-degree oven.

Bake for 90 minutes. Then remove the pumpkin lid and bake for 20 to 30 minutes more.

Remove from oven and stir the stuffing, inside the pumpkin. Feel free to scrape some of the flesh into the stuffing as you stir. But do be careful not to scrape too much flesh, as the walls of the pumpkin have been weakened by cooking.

Serve the mutha! I use crackers or bread sticks for serving. And it’s so amazing! I’ve never followed Dorie’s suggestion of slicing the stuffed Pumpkin for serving. For me, it’s still an appetizer/dip sort of thingie. This one takes some time, y’all. A good deal of prep is involved. But once you put it in the oven, you’re basically done. Sugar Pumpkins are only available for a few months each year. Do yourself a favor and make this awesome dish. And if you cross paths with Dorie Greenspan, thank her for me. 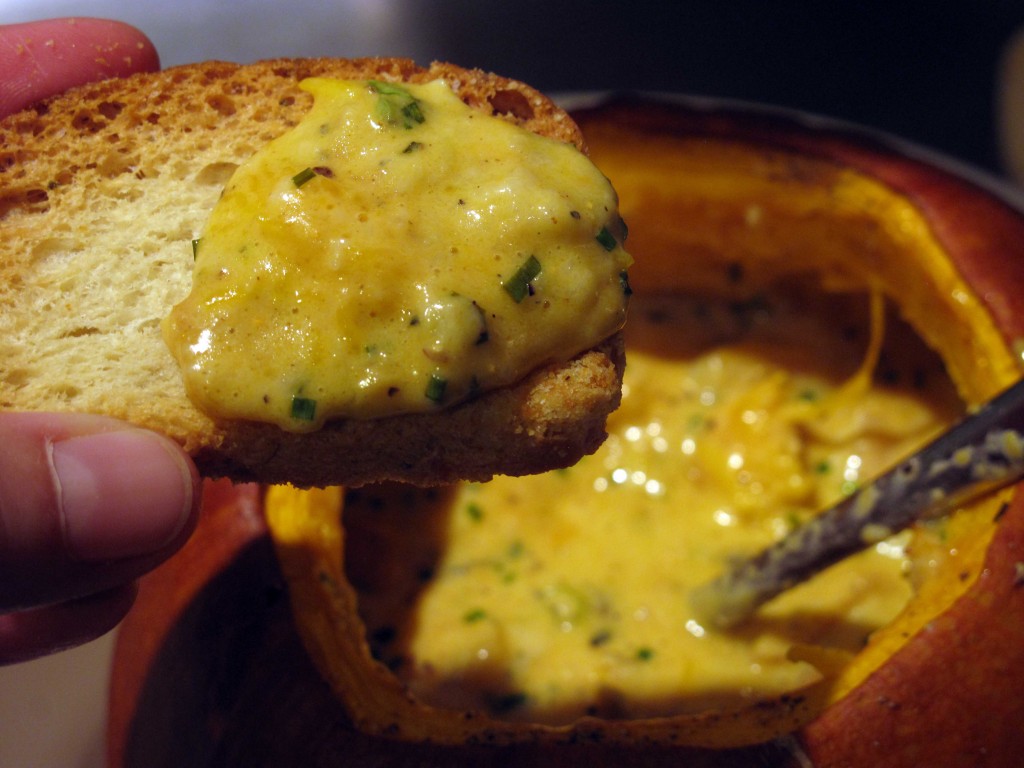 Here’s the link to her recipe: Dorie Greenspan’s Pumpkin Stuffed With Everything Good

And here’s the printable (without my changes)…

Dorie Greenspan’s Pumpkin Stuffed With Everything Good
Recipe Type: Appetizer
Author: Dorie Greenspan
Prep time: 35 mins
Cook time: 2 hours
Total time: 2 hours 35 mins
This is so amazing! I’ve never followed Dorie’s suggestion of slicing the stuffed Pumpkin for serving. For me, it’s still an appetizer/dip sort of thingie. This one takes some time, y’all. A good deal of prep is involved. But once you put it in the oven, you’re basically done. Sugar Pumpkins are only available for a few months each year. Do yourself a favor and make this awesome dish. And if you cross paths with Dorie Greenspan, thank her for me.
Ingredients
Instructions
Notes

This is Dorie Greenspan’s recipe, so the changes I’ve made are not included. Please see my blog post for those changes.