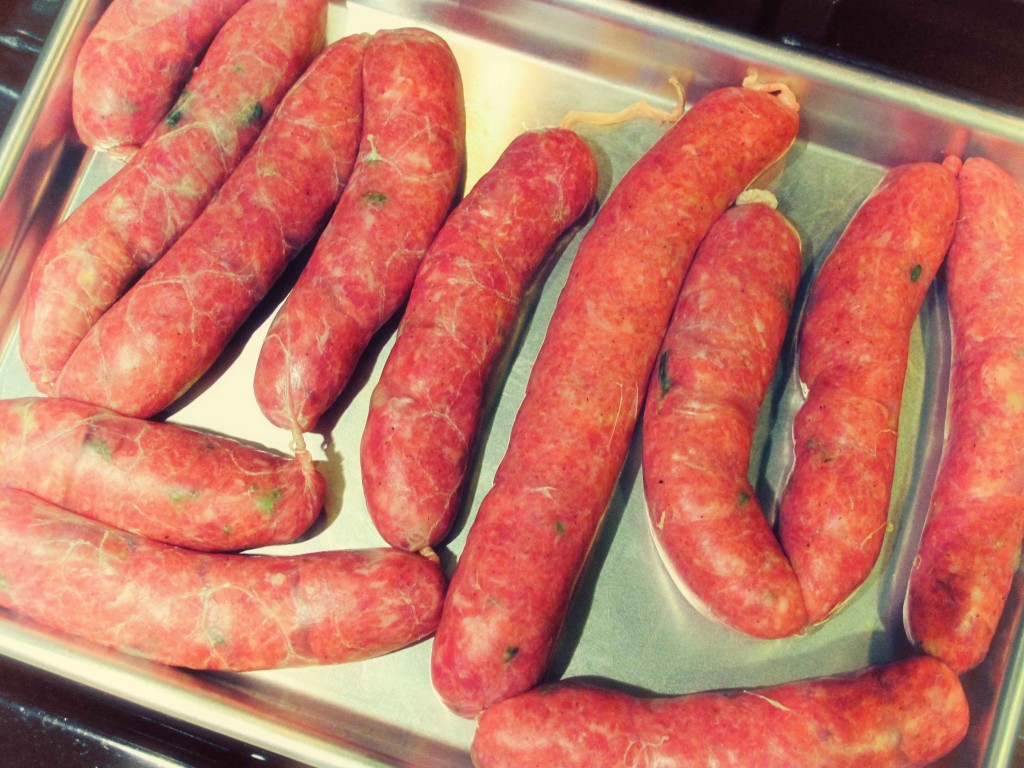 Anyhoo, Mister and I wanted to see if we could create his Grandma Sophie’s Polish sausage. She passed away years ago, but the recipe was preserved by her sister, Esther. Esther died last year. She lived to a ripe, old age and had a full life. Her cholesterol level was in the 400+ range, but a little Polish sausage here and there didn’t hurt (as that wasn’t what took her to the sweet beyond). It’s funny, the recipe we have still has her name and number on it. I may share the recipe at some point, but for now it’s still a private family thing.

As Santa brought me sausage attachments for my stand mixer – the very gifts I’d requested (thanks a butt-load, Santa!) – we had all the tools we needed.

So we gathered our ingredients. Because I’m a food dork, I knew to drive straight to a particular Italian deli for the hog casings. Once I had those in hand, the few other needed ingredients were a snap to assemble. I headed home and Mister and I started grinding the pig meat. It wasn’t a hard process or anything. In fact, soaking the casings took longer than any other step. And with 2 of us making the sausage, it was fairly easy. Once the links were made, we let them “cure” for 2 days before cooking.

Mister’s father’s family ate Polish sausage thusly: they boiled it for about a half hour, then they cut it in pieces and finished cooking it in the oven, and finally they served the cooked pieces with ketchup. Say what you will, but believe me when I tell you that their family tradition is a good one, y’all.

So this week’s creation was food. Good food. Food with history. As we were stuffing the sausage and making all kinds of dirty jokes (as well as a few “The Wall” references), it occurred to me that Mister’s Grandma Sophie and Auntie Esther probably got together back in the day, for their sausage-making sessions. Probably made the work a bit easier, being shared and all. I couldn’t help but think one or both of those good Catholic gals made their own dirty jokes somewhere along the line. I like to think so anyway.