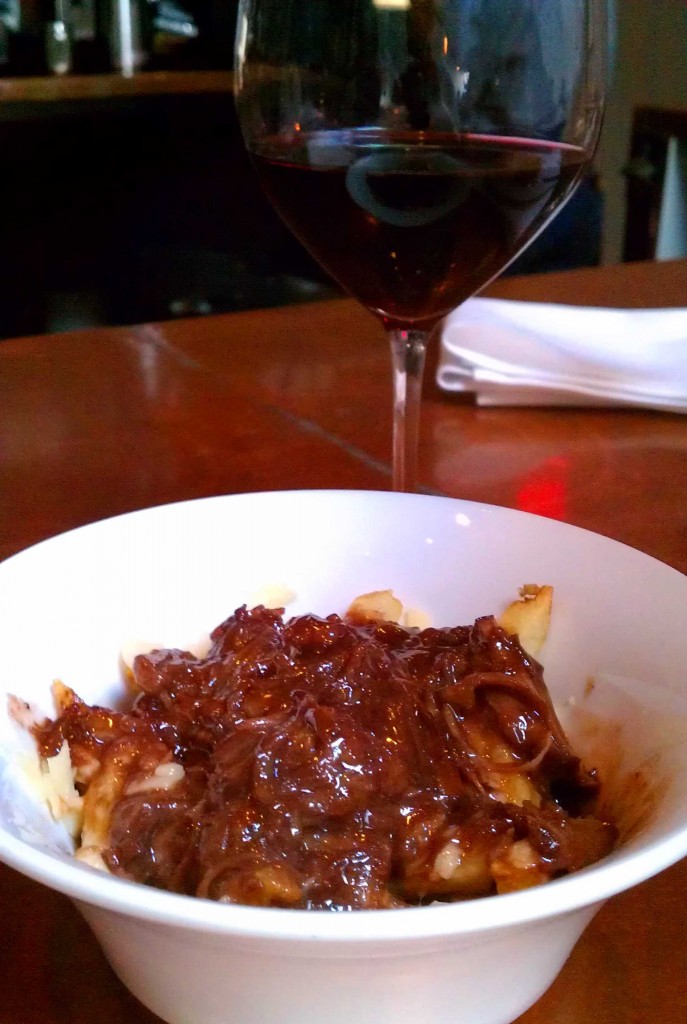 This weekend Mister and I went out for a danged good meal. We’d heard about “Animal” a few years ago when it opened. Then, during the whole foie gras bullshit that was going on, I remember the restaurant’s owners being quite vocal on the subject (they were against the ban). Listening to those guys during interviews, I really learned a lot about the movement against foie and why the animal-rights folks were so ass-backwards on the subject. I respected those guys and decided I wanted to try their restaurant. Me being me, it only took me 2 years to get there.

I’m going to tell you now that I did not take any photos, other than the one above. This was by choice. I wanted to be fully present for the meal and Mister, and I’ve been trying to not dork out so much at restaurants. So far, I’m appreciating my choice.

Anyhoo, we didn’t have a rezzie so we were seated at the bar (next to Marc Maron, for those who are into celebrity sightings). Animal is a small plates joint, so we each chose a couple of dishes and ordered everything at once. We savored chicken liver toast, then a gorgeous green garlic caesar salad came out. (We chose that dish because we thought we should order at least one vegetable.) Best salad I’ve had in ages. Next there was a wagyu carpaccio, with slight Asian influences in the dressing and presentation. It was spectacular. The next dish was crispy pig head with rice, “bulldog sauce” and a soy-marinated egg. Just to clarify, it wasn’t an entire pig head. It was the cooked meat from a pig’s head, fried up and beautiful.

At that point, I was feeling pretty good. Sharing dishes had left me on the verge of being sated, and not at all stuffed. And that’s when the last dish was placed before us: poutine. For those who don’t know, poutine is basically french fries covered in some sort of gravy with cheese (or cheese curds, for purists). The dish originated in Canada in the 1950s, and yes, it did lead to chili-cheese fries. But make no mistake – these were no mere chili-cheese fries, y’all. This was the most mind-blowing dish of the night for me. In fact, after a single bite, I had to be still for a moment. I sort of zoned out and lost touch with where I was. When I was able to re-connect with my surroundings, I cussed out loud and realized Animal’s poutine would surely be my “last supper” request, should I ever find myself on death row. Mister and I continued to share the poutine and each time I took a bite, I cussed. Couldn’t help it. It was a stunningly impressive dish. Impressive enough to lead me to take the above photo.

Before I forget, I want to share something that happened earlier in the meal. To the left of us at the bar were 2 chicks who’d ordered different dishes than us. As they appeared to be food dorks (like us), we chatted about the menu. When those gals had reached their limits with the dishes they’d ordered, they offered their leftovers to us. Now, I have never once had complete strangers offer their food to me at a restaurant. Someone in my group? Sure. But strangers – no. I don’t know what to tell you, other than the truth. We took those leftovers and we ate the heck out of them. It was crazy and cool and weird and wonderful, all at once. Don’t ever think there aren’t amazing people in L.A., because we’ve got ’em.

When all was said and done, Mister and I agreed we’d had a fantastic meal at Animal. Arriving at opening time took care of the lack of rezzie, and the bar was a great place to sit (full menu service there, too). I highly recommend it, and if you’re visiting, maybe plan ahead for this one.

And if you order the poutine, I can tell you from personal experience that it’s okay to cuss. It’s that good.