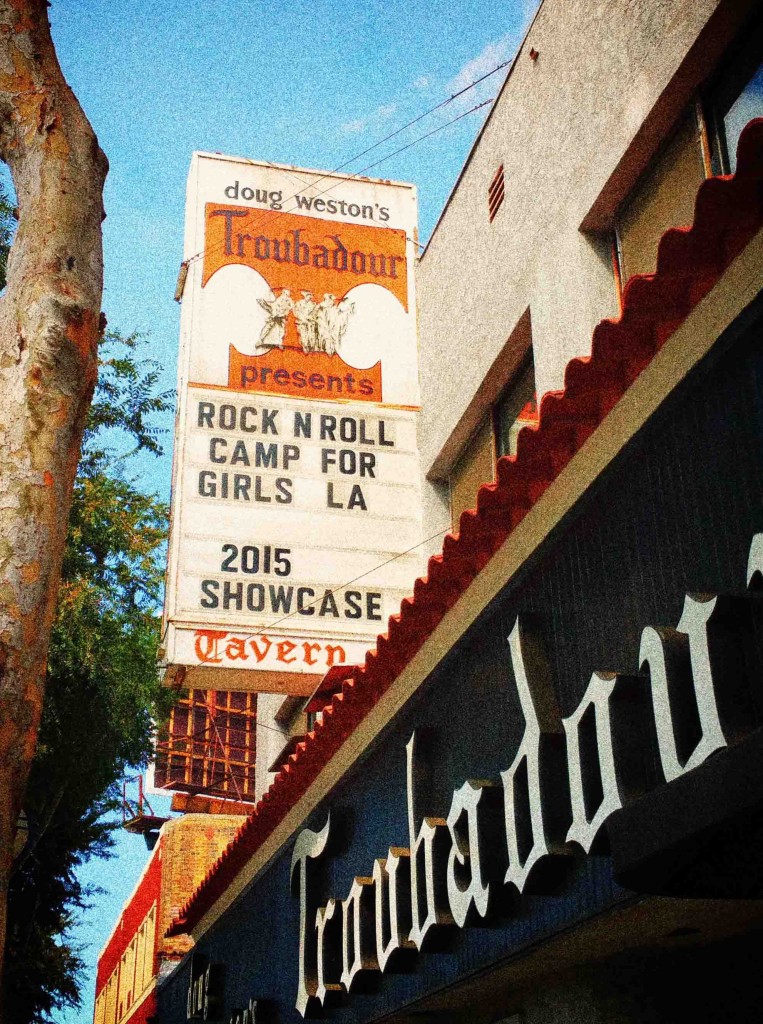 Saturday was this year’s Rock Camp showcase and it all went down at The World Famous Troubadour!

Though the day’s moments followed the same order as those of years past, it was fresh and exciting. Each of the camper bands was unique. And all the campers were bold and brave. 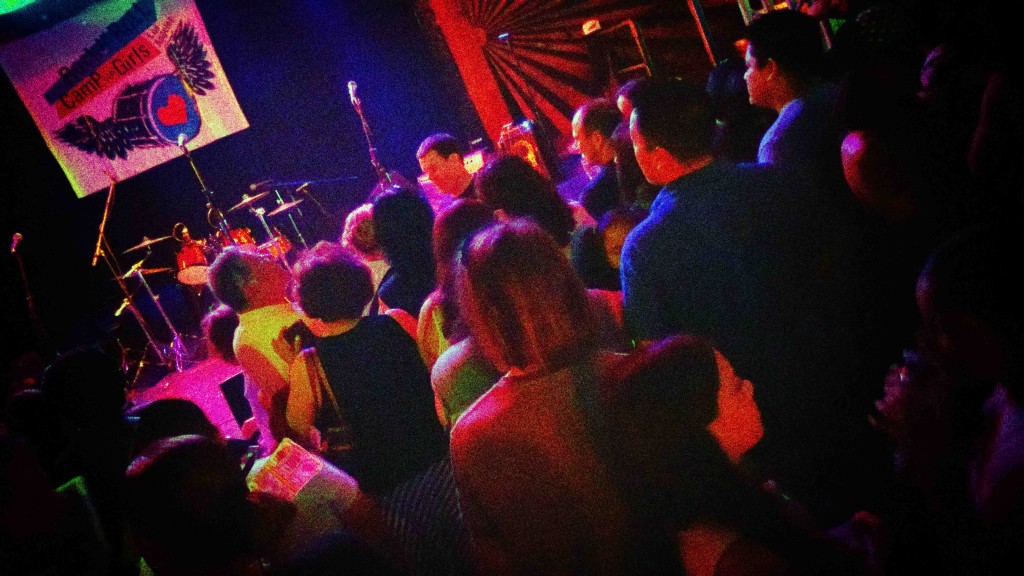 I witnessed young girls taking the stage and owning microphones, shredding on lead guitars and bass guitars, wailing on keys, ripping on drums – and every girl on that stage was a Rock Star. It was astounding to hear their songs and watch their performances. I was not only impressed, I was also moved. It was a beautiful way to end a week at Rock Camp. And it touched my heart.

After the last camper band left the stage, our interns for the week performed an original composition. Then all the campers took the stage for the last time and collectively sang the camp theme song. And just like that – it was all over. Rock Camp 2015 came to a close. 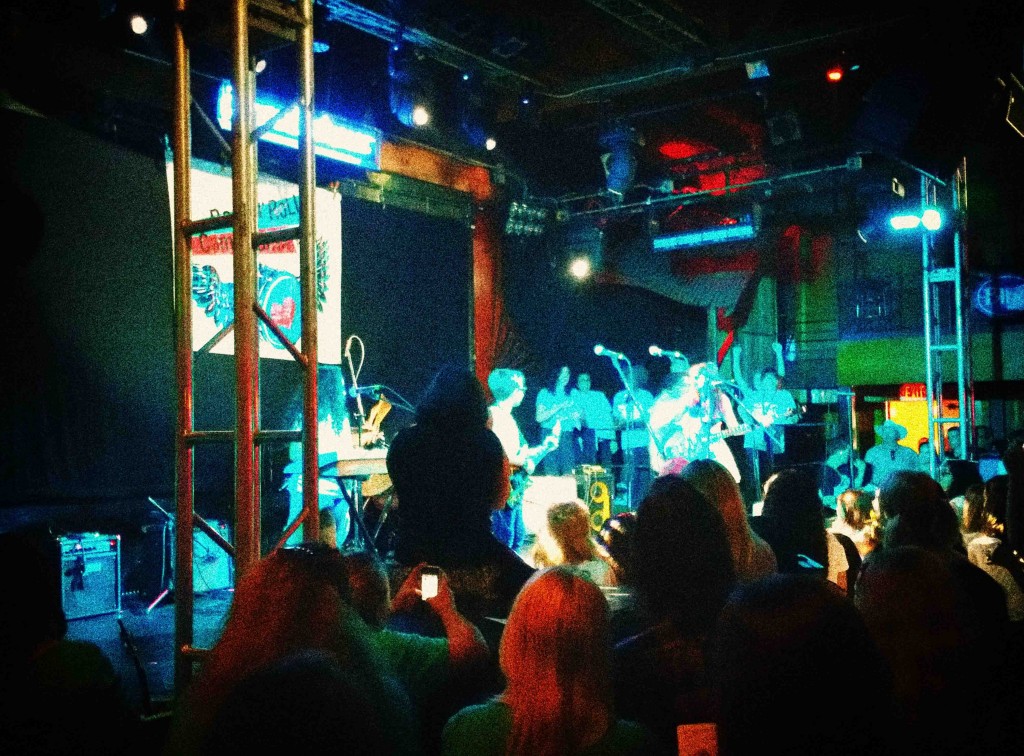 I want to be honest with you. I do. With that in mind, I admit that the very end of Day 5 was challenging for me. I am not at liberty to disclose specific details, but I can tell you I felt so many things that broke my heart. I was disappointed in myself. I doubted my contributions. I wondered if I truly belonged. That last one really stung, because all week long I kept thinking how amazing it felt to be an integral part of the team that makes Rock Camp happen each year. I love those volunteers. More than once I’ve said they are my tribe. And I’ve meant it. Doubting my place among them hurt. Still does. I’m guessing the pain won’t subside for some time.

Usually at Rock Camp, campers and volunteers learn of new abilities. Their eyes are opened to their being able to claim a new talent or skill. I love that about Rock Camp and I’ve counted myself lucky to have experienced my own growth during camp. This year, I learned of my limitations. And while I absolutely do not like it, I did still learn something. And I’m trying to see that as growth. I’m trying.

Finally – many parents approached me at The Troubadour to tell me how much they appreciated my greeting them and their girls in the parking lot each morning. Some parents shared lovely things their girls had said about me. Some parents simply told me I had helped them start their own days with a smile. All those nice words made me feel a bit better. So did the sweet note I received from a fellow volunteer, thanking me for my work during the week. But the thing that really pushed me over the top and into cry-eye mode happened on the stage. 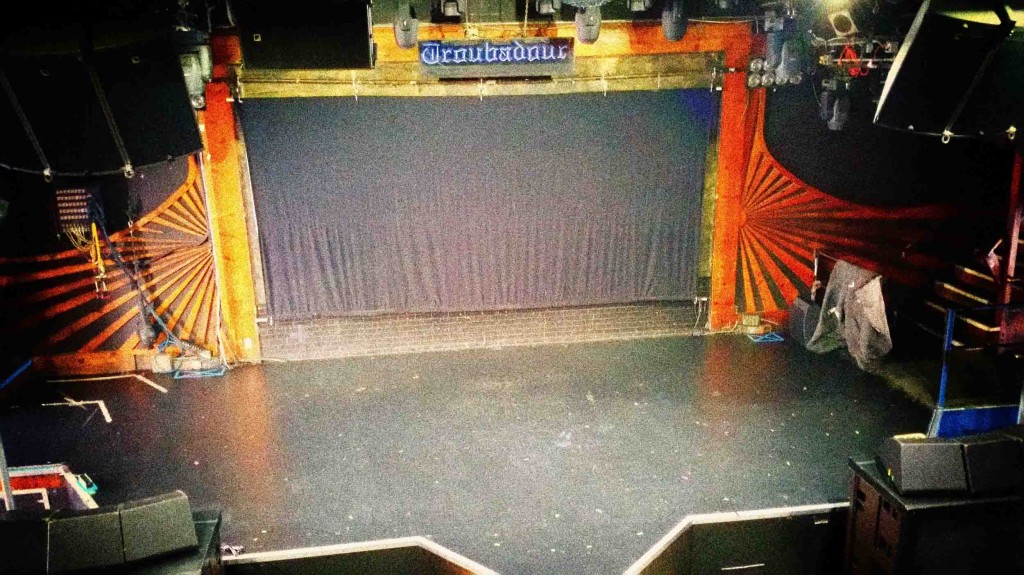 The band I and 2 other volunteers coached this week was called “Apparently Famous.” Those 4 campers were so utterly amazing, I almost couldn’t process it. They were – each of them – kind, intelligent, respectful, open-minded, polite and ready to rock. Anyhoo – after they had finished performing their song, “Devils in Heaven,” they leaned into their microphones and in unison said, “Thank you, Mikki!” Just typing the words makes me cry. I don’t know why they did it. I don’t know why I was singled out. I mean, they had 2 other amazing volunteer coaches all week, too. Why my name was spoken is a mystery. Tremendously appreciated, but a mystery all the same.

Sometimes when I’m doubting my place in this world, when my value as a human soul is questioned within, when I just don’t know if I matter – the universe reaches out to me to get my attention, to remind me to hang in there. Sometimes I get it. Sometimes I don’t. At Saturday’s showcase, the universe reached out to me through the voices of parents, volunteers and 4 amazing young girls, who absolutely-positively made my day. No matter what my future holds, I will always be grateful for those Apparently Famous campers and their loving hearts.