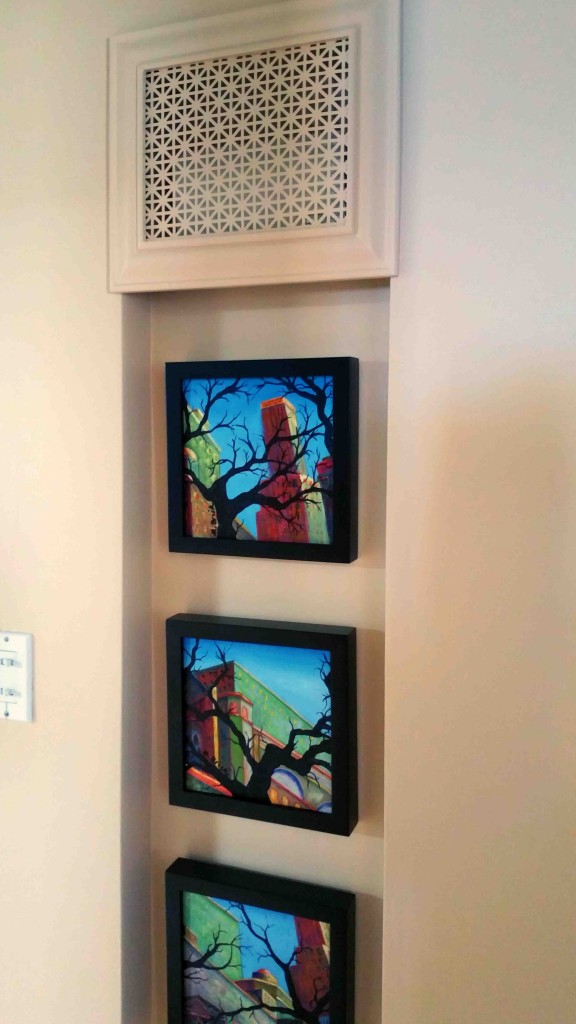 This is one of my favorite creative projects at the New Pad. What you’re seeing above is in a hallway. Why the builders of this place decided to cut out a nook, I cannot say. It was a long, long time ago and I am not the boss of the past. But cut out that nook, they did. And that’s where the doorbell apparatus was installed. I have no idea how old the doorbell is, but I do know it’s danged unattractive. Ideally, something more appealing could have gone in. But I am a big fan of the “if it ain’t broke, don’t fix it” mantra, and so the old, ugly doorbell was kept. Still – I sure didn’t like the yellowed plastic casing of the thing. So I devised a plan.

I took an old photo frame (that we already had) and made sure it was wider than the nook. Then I went to the hardware store to find some sort of patterned, cut-out sheeting. Honestly, I hoped to find plastic. But I didn’t. Instead, I found a sheet of cut-out metal. It would have to do. Because the metal’s gauge was of a certain thickness, I knew I had to also get myself some cutters that could handle the job. Once I’d purchased those items, I went home and marked out the size I needed for the metal to fit into the frame’s insert. Then I cut it – carefully – and used small glazing points to hold the metal in place. Once I felt that was solid, I took out the exact same paint I’d used on the walls and painted the entire frame/metal insert.

At that point, I considered installing a “shelf” just beneath the doorbell, to isolate and enclose the casing. But I got lazy. It happens. Instead, I attached super-sticky velcro to the wall and to the frame and hung the cover in place, with the bottom left open. I then hung 3 little paintings beneath the doorbell cover and bam! No more ugly doorbell guts. Not only that, the doorbell isn’t muffled or anything, so hearing it hasn’t been affected. And if I ever do need to work on or replace the doorbell, I only have to pull the cover from its velcro attachment for full access.

Like I said, this is one of my fave projects. It sort of disappears into the wall, which is exactly what I’d hoped would happen. I don’t see the doorbell or the velcro that holds the frame to the wall. All I see is a blended cover.

I absolutely love when an idea works out!