“And I can hear my mother sayin’

Isn’t that a great sayin’?”

“Moments of Pleasure” from The Red Shoes 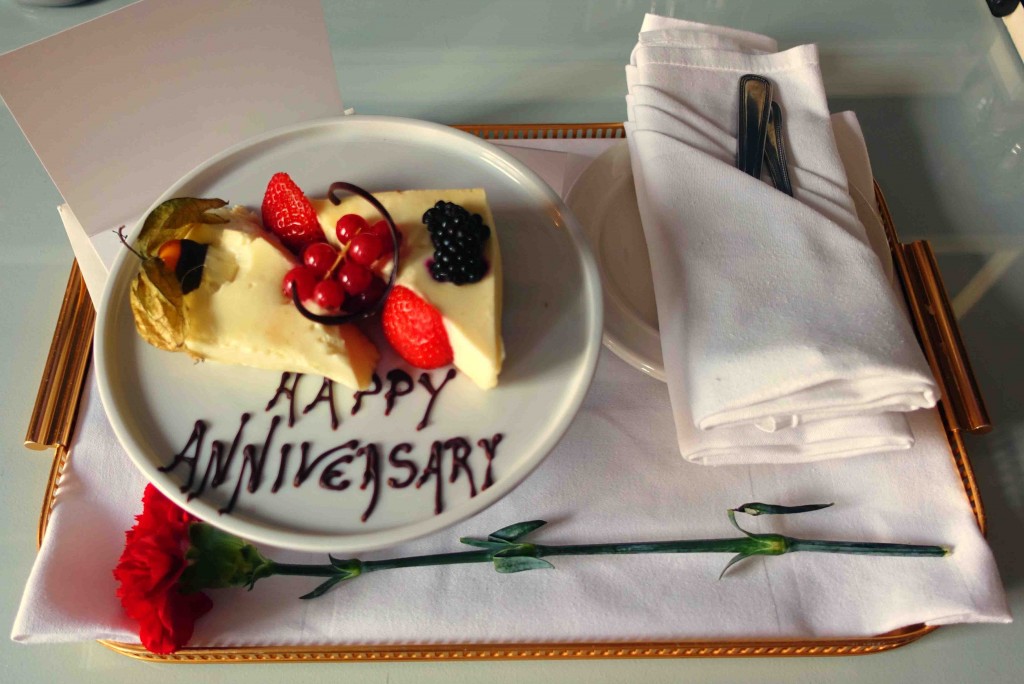 We woke to a new day and an anniversary. We knew we had the Kate Bush concert that night and were fairly bursting at the seams. But that wasn’t until the evening. Until then, there was time to tick an item or two off our tourist list. 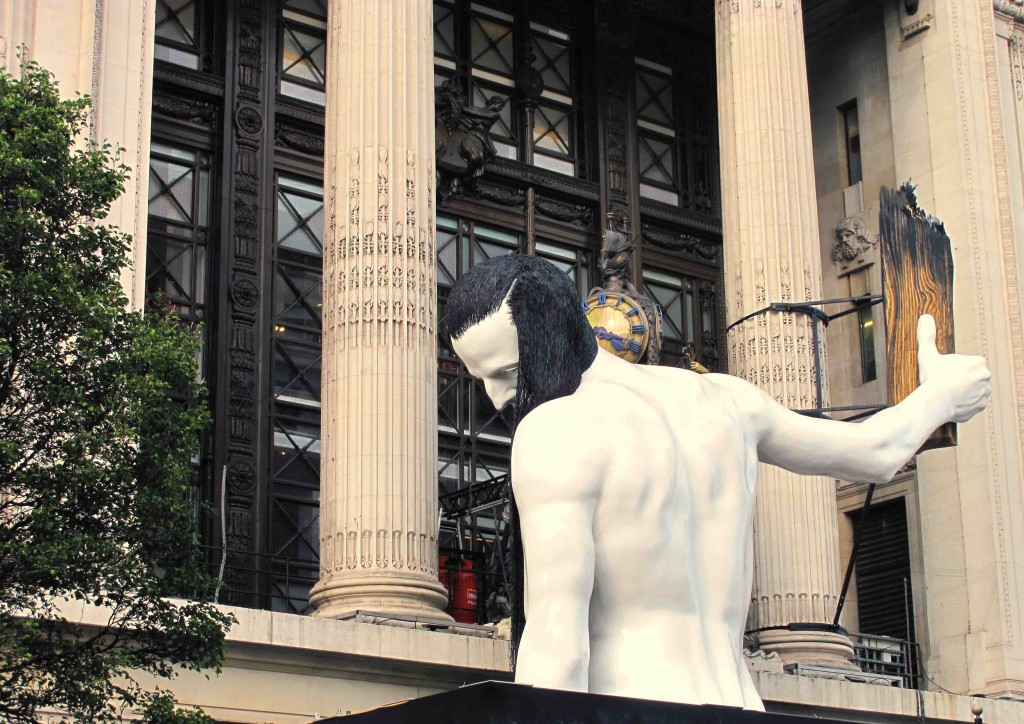 As we’d slept in, we’d missed the appropriate time for breakfast. Instead, we set our minds to thinking about lunch. With that goal filed away, the two of us readied for the day and headed out. Our destination? Selfridges. 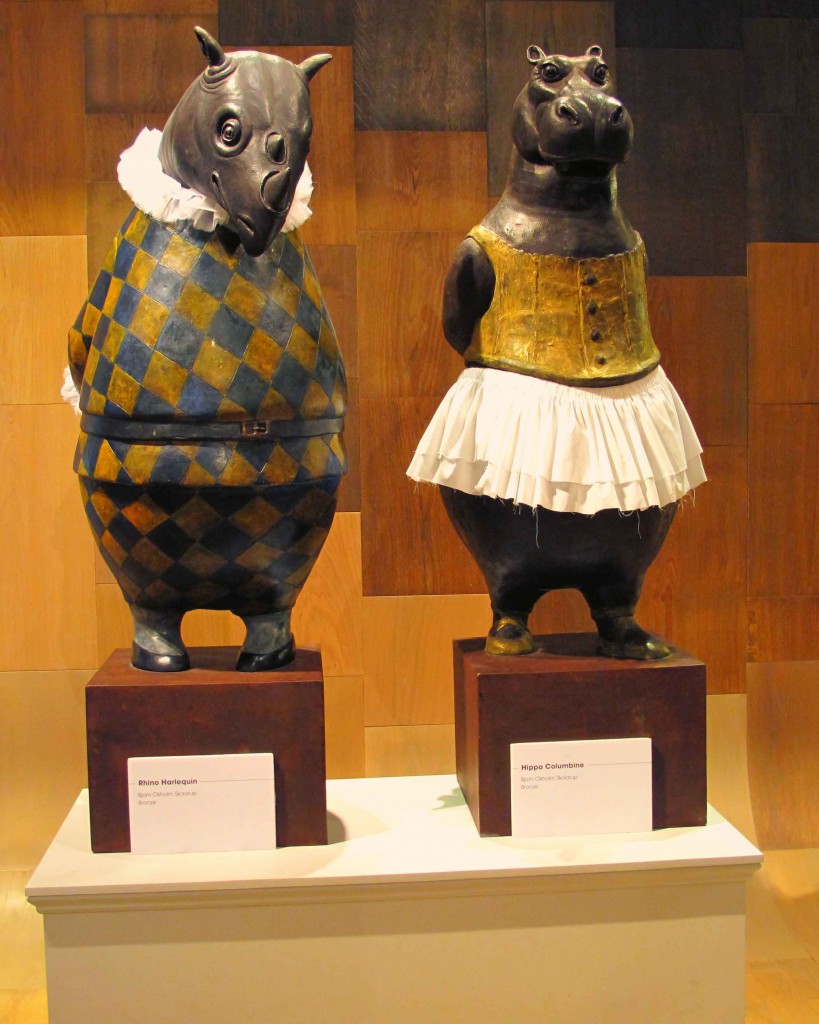 Mister and I have been watching the PBS-Masterpiece Theatre show “Mr. Selfridge” and we are hooked. It is now one of our “stories” and we’re not ashamed. While I knew of the store, it just wasn’t a place I’d ever wanted to visit during previous trips to London. But this time was different. Knowing a bit of the history of the place endeared it to us. What can I say? We wanted to see the house that Harry built. All in all, it’s a modern-day department store. It’s fabulous, of course, but it is a department store. The things we wanted to see were the clock outside and the ground floor. Some of it is original, but not much.

As we’d missed breakfast – again – lunch was in order. And since it was our actual anniversary, we decided to have ourselves a pretty sweet spread. And so we did.

After walking around the store and seeing most of what it had to offer, we headed out.

Now, our concert tickets held assigned seats. So there was no need to get there and wait for hours on end. But for some reason, I was keen to do just that. Mister’s cooler head prevailed, however, and we got there about 30 minutes before the doors were due to open. And yes, there was quite a queue. Everyone was so excited! People were smiling and appeared to be in great moods. Of course they were! We were all about to see Kate friggin’ Bush! And here’s something I noticed: the majority of the queue seemed to be male. Hmm. Anyhoo, a few minutes before the designated time, the doors were opened and the ticket-holders began filing inside. Hole-y doughnuts! It was happening! 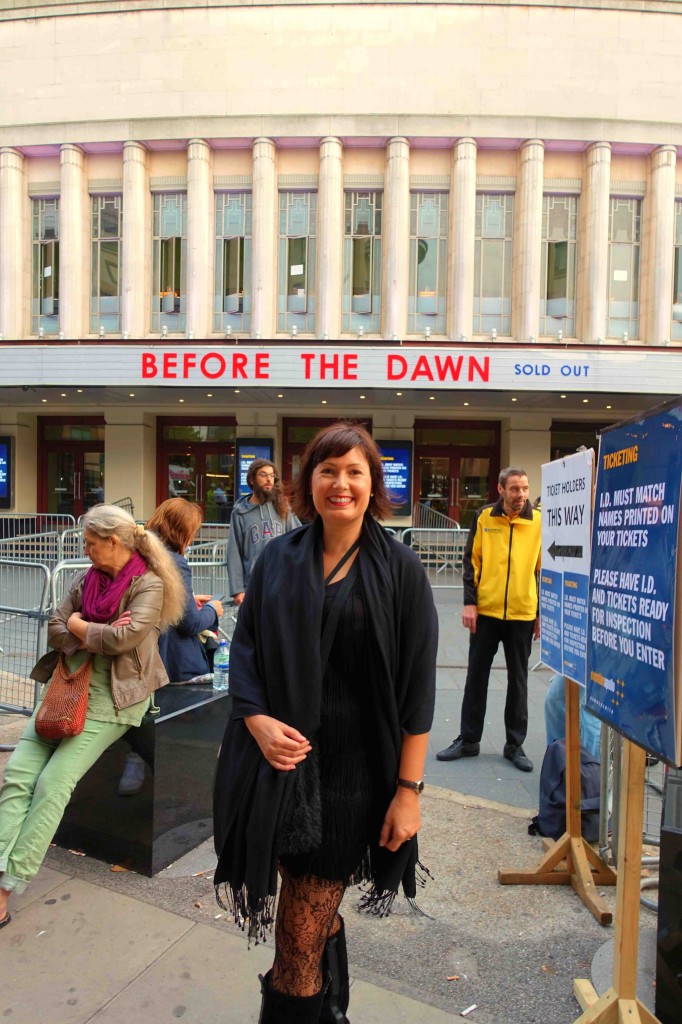 The first stop for me and most everyone else was the merch stand. I had come on a mission not only for myself, but also for my friend Betro. She had requested a program and – get this – a piece of confetti. (For the record, I had no idea what she was talking about when she asked for confetti, as I had successfully avoided reading about the concerts before going. All I knew was that Betro had said, “Trust me – you want a piece of confetti.”) So Mister and I pressed toward the merch stand and did our best to be patient. With the exception of feeling a bit crushed by the enthusiastic throng, the process was pretty smooth. Again, you have to think about how excited we all were. This merch business wasn’t going to bring us down. Kate friggin’ Bush! When I was finally standing before the chick behind the counter, I was ready. I got programs for both Betro and us, t-shirts for Mister and for me and, because I couldn’t resist, I got myself a souvenir mug. I absolutely love it.

Once the merch had been acquired, Mister and I moved over to the bar for a cider. There was so much time before the show was scheduled to start and we were pretty amped. Frankly, the combination was hard to manage. I mean, unbridled excitement and patience are not BFFs. But sometimes you gotta buck up and settle down. And that’s what we did. We found our awesome seats and chilled. We watched the crowd and enjoyed everyone’s enthusiasm. The Eventim Apollo was fairly grand, too. A recent renovation has left the old gal gleaming. 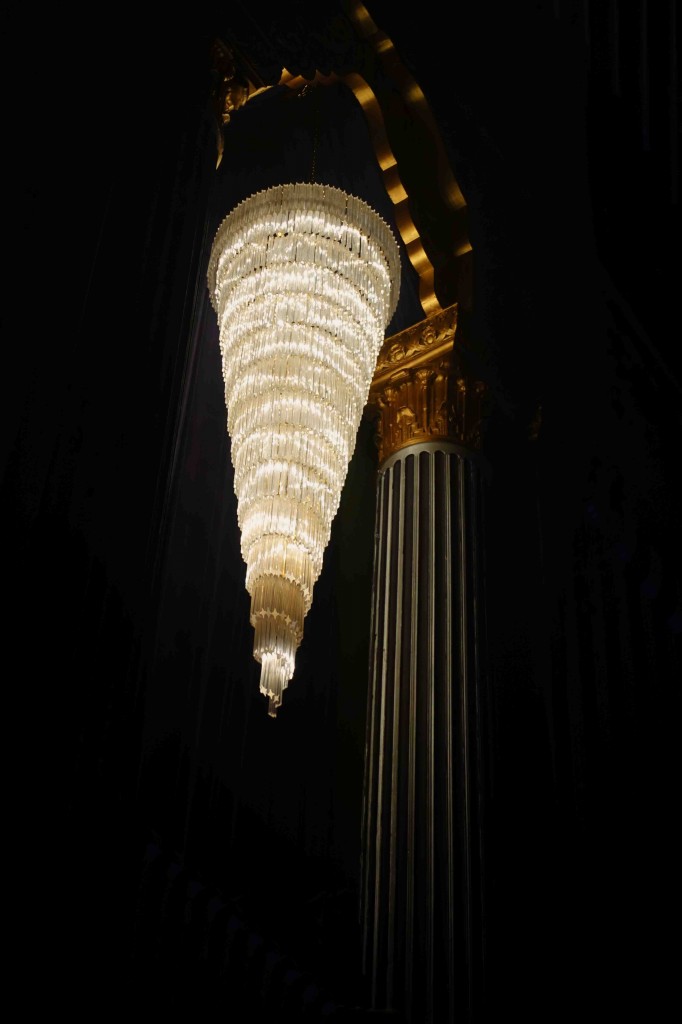 As showtime approached, Mister and I noticed a group of folks being led in to stand against a nearby wall. We figured these were the fans we’d seen waiting outside, in a non-ticket-holder queue. Apparently there are a limited number of SRO (Standing Room Only) seats given out each night of the run. Those lucky few who made it inside were beaming from ear to ear, I tell you. And I doubt they ever tired of standing, either. Would you?

Anyhoo, after what seemed like an eternity… Wait. I guess when I think about it, I’d been waiting for this concert since I was 15. Not quite an eternity, granted, but quite a while. But I digress. So the house lights dimmed and we privileged few inside the theatre gasped in unison. It was time!

At this point, I’m going to tell you some of what I witnessed. I have no photos of the show, as Ms. Bush wanted her audience to focus solely on the stage and not on cameras or phones. (No worries on this front, however, as the show was being filmed. I’m thinking there’s a Live DVD in my future…) If you’re going to a show soon (there are a few more nights) and want to be surprised, stop reading now! Otherwise…

Though the stage lights hadn’t yet come up, we could see musicians taking their places and readying to play the first notes. With a bang, they did just that. The crowd roared! From house right the vocalists entered, in time with the music. And there she was! I could hardly believe it, but it was true. She moved in time with the music, taking her place at the center of the stage. The backing vocalists took their places, house left. Then Kate Bush opened her mouth and we heard that voice. It was as beautiful as ever. It was as strong as ever. It was, quite simply, as ever. “Lily” was the opening number and it was a bold – and for me, unexpected – choice. The song finished and we all jumped to our feet. After an appropriate applause break, we heard the 6 words all Kate Bush fans know and love: “It’s in the trees! It’s coming!” Yes, “Hounds of Love” was next.

I think that was the first time I cried during the show. I wasn’t blubbering or anything. I just felt happy tears easing down my cheeks. And I couldn’t stop smiling.

After another standing ovation, “Joanni” began. And though I have heard this song many times before, it was more beautiful than I remembered. Just as I was coming out of that song’s spell, “Top of The City” began. And if anyone in attendance questioned Kate Bush’s ability to hit those high notes, her performance of this song crushed all doubt. Chicken skin, I tell you! Chicken skin! I was in awe!

Then the drums started. Those drums, friends. “Running Up That Hill” swept over the crowd. And we loved it. “King of the Mountain” came next and it, too, was beautiful. Unbeknownst to most of us, that song signaled the end to anything resembling a traditional rock show. For next we were shown a darkened stage and a large screen. A short video followed, setting up the piece of theatre that was to be the remainder of the first half of the concert. And what a remainder it was! Basically, we were all treated to “The Ninth Wave” – side 2 of The Hounds of Love record (“And Dream of Sheep”; “Under Ice”; “Waking the Witch”; “Watching You Without Me”; “Jig of Life”; “Hello Earth”; “The Morning Fog”).

To say a spectacular Musical ensued would be such an understatement, friends. The sets were astounding. The songs were familiar and fabulous. I was so the smitten kitten! As were we all, y’all. The production of “The Ninth Wave” left me wanting for nothing. When the entire band and all the singers walked to the front of the stage for an acoustic version of “The Morning Fog” to close out the first half of the show, those happy tears made another appearance. At the song’s close, all the performers left the stage and a beautiful red curtain descended to hide the stage. Because I knew nothing of what the second half of the show might hold, I failed to see the significance of the feather on the curtain. 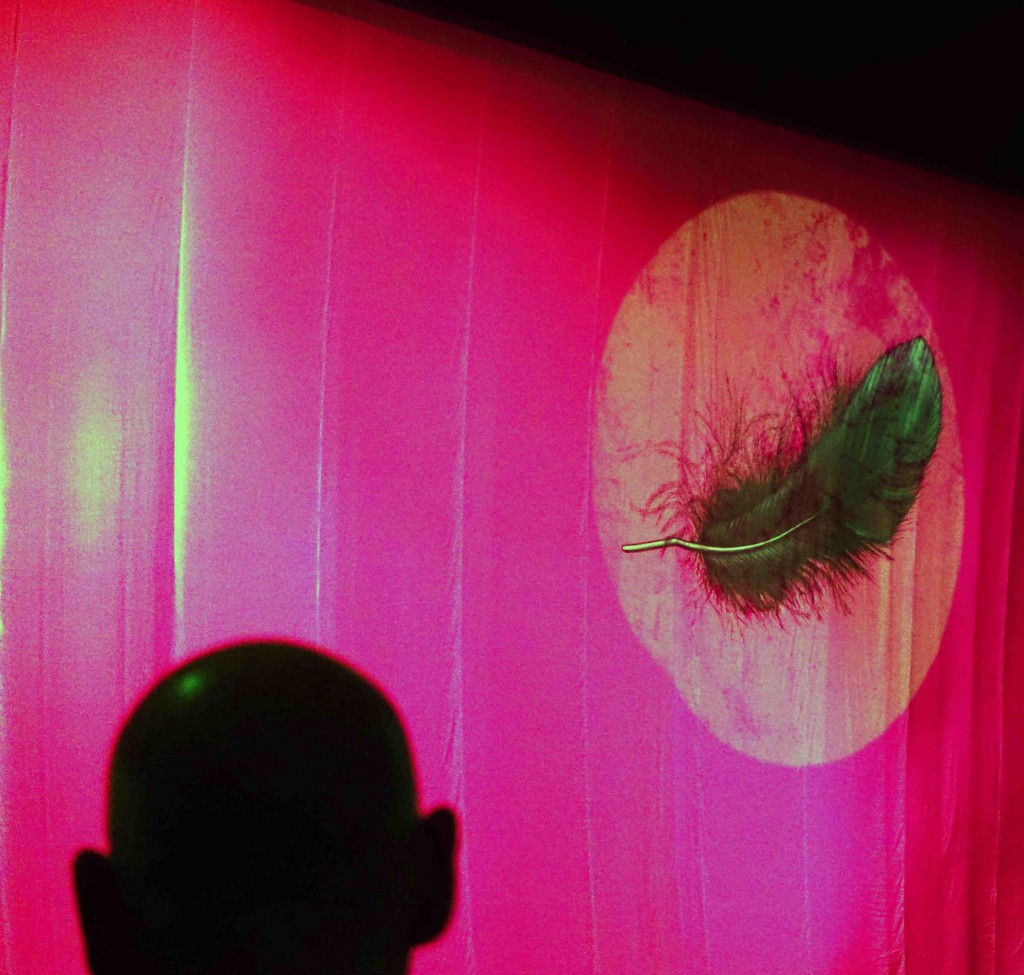 After the intermission, the second disc from Aerial – “A Sky of Honey” – was performed in its entirety. Again, another brilliant musical production was witnessed. And loved. At its close, Kate Bush took the stage alone. Sitting at the piano, she performed “Among Angels” from 50 Words For Snow. It was quiet, yet strong. And if the show had ended there, I would have left the theatre happy. But the show didn’t end there. Instead, all the performers rejoined Ms. Bush onstage and with no hesitation, they launched into “Cloudbusting.” I honestly thought the roof would fly right off the building. When the song was nearly finished, Kate Bush encouraged the audience to sing along. And did we ever! Even Mister was crooning, and that guy never joins in a sing-along. Kate Bush kept encouraging us and we kept going. Those joyful tears were flowing in full force. And I seriously doubt my eyes were the only ones expressing themselves. Finally, the song ended. Kate Bush profusely thanked her fans, then exited the stage. The house lights came up and it was over.

Mister and I made our way to the Underground and back to our hotel. Our excitement for the show had overshadowed the fact that we’d had only one meal all day. At the hotel, it was too late for proper food, so we snarfed bar snacks like crazed monkeys. We also talked about the concert and how we’d never seen anything like it, and likely never will again. We also realized how fortunate we were to have witnessed that show. It was amazing and we were there! I couldn’t get over it. I still haven’t.